Most weddings are lovely and make people feel happy but sometimes there is something wrong with the bride and groom and people might think this marriage ends in divorce. A Reddit user asked “People that work in the wedding industry, have you ever seen a couple and immediately thought ‘this ends in divorce?’ Why?” and here are 39 responses. 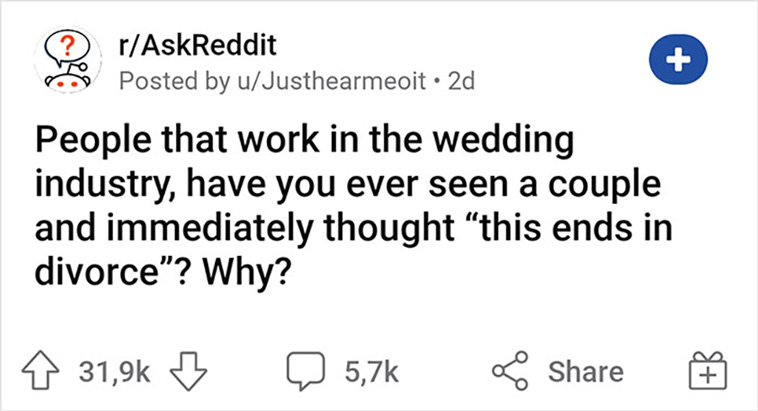 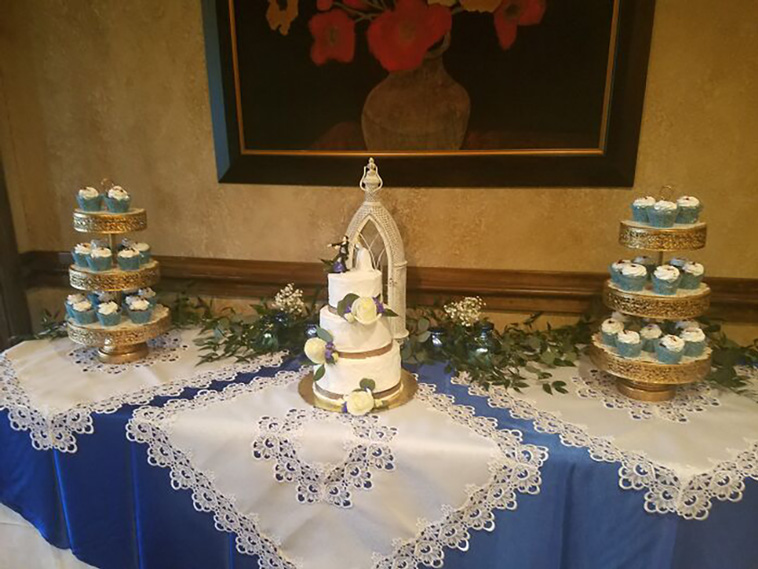 All the f**king time. You know how they say 50% of weddings end in divorce? I can pretty much predetermine who that 50% are going to be with about 98% accuracy.

I bake wedding cakes for a living. I own my own bakery, but have also worked in a country club kitchen, doing basically the same thing + other pastry chef duties day of weddings. I’ve seen them both for the tasting/design consultation, and on their wedding day. I see how they interact when they’re just together, but also when under stress of the big day. I’ve seen everything. Lots of cheating, lots of drunks, lots of terrible mothers.

Once had a Mama’s boy who ignored his wife when they were supposed to be having their cake tasting to cuddle their mother and hand feed her cake. His mother was NOT supposed to be there, and you could tell the bride was pissed. By the end of it he had kissed his mother on the lips multiple times. Divorce.

Have seen a woman b**** and complain at everything her fiancé said. Any suggestions he had for what he liked resulted in him being called stupid. Anytime she’d open her mouth he’d cower and flinch. Their cake actually got canceled like a month before the wedding, so we didn’t get anything but the deposit even though we’d started baking it. First time I’ve lost out on money and I’ve been relieved.

Once had this arrogant [jerk] Turkish guy marrying into this Bangladeshi family. Bride was sweet, about 10 years older than him, and came from a fairly well off family. Generally got the impression that this being a Turk/South Asian marriage was kind of a big deal, even though they’re both Muslim, but since she was 30-something they wanted her to get married so they allowed it.

Guy complains about everything during the planning process, especially over them not serving alcohol. Is generally a [jerk] to us, but is just straight up cruel to her. like at one point when we were meeting I asked after her wedding dress, because south asian wedding dresses are gorgeous. She’s showing me this amazing dress and he says straight up ‘I don’t know what she picked that one, she looks fat and old in it. every other woman is going to be more beautiful than her one her wedding day.’ He then shows me this dress he picked out, which isn’t traditional south asian style at all, and is very western and very fugly and basically makes the model in the picture look naked it’s so sheer. When she says something about how no mosque would let her in dressed like that and her traditions are important, he just sneered and said she should ‘get over it’ and her traditions weren’t that important. Divorce red flag.

Found out later they didn’t last a day. From the way the servers tell it, midway through the reception, guy raises his hand to his new bride when she asked him a question about being drunk and she flinched and turned away, protecting her face. He grabs her by the arm and rips her around, pissed. Her mother and aunt were standing three feet from her and lost their f**king minds, realizing what must’ve been happening there. His response when Mom started to lose her s**t on him was to hit the mother. So in the middle of this very big, 600+ person Bangladeshi wedding, this 20-something outsider dickhead no one wanted her to marry anyway smacked a well respected woman in their community. There was a brawl, the cops were called, marriage was annulled. 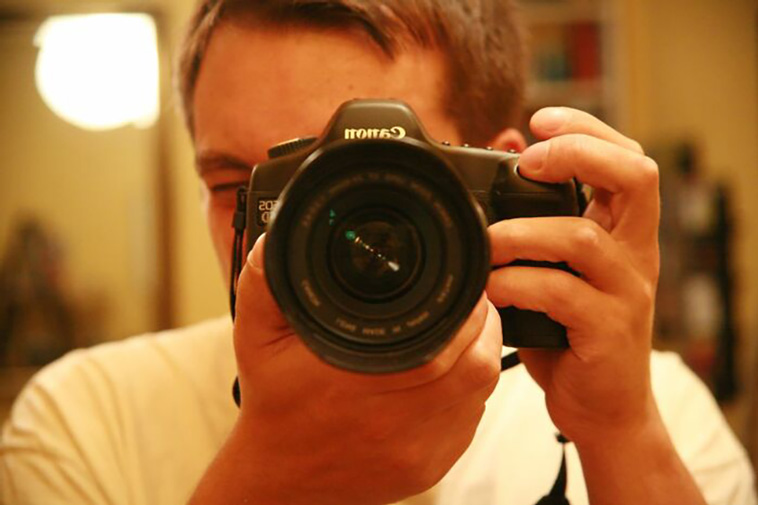 Photographing the groom and you see his eyes light up when a guest arrives. You look over and it’s a cute woman in a short dress. He smiles, walks up to the woman, picks her up and swings her in his arms.

Best smile I captured of the groom all day. Marriage didn’t last 6 months from what I’ve heard. 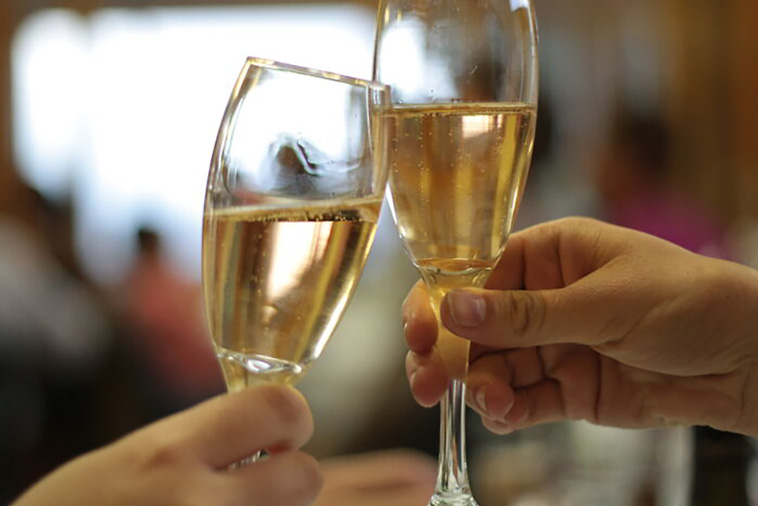 I worked fine dining/catering for over 20 years so Iʻve worked lots of weddings and receptions. I once heard a bride at the reception during the toasts say that she actually thought she was asking out the grooms twin brother on their first date and that might actually be cute except she …just kept going on. How the twin was more compatible, etc. then she ended the toast with “well…as nice as you are youʻll make a great first husband”. I was walking past the camera man at that time and you can hear me on tape saying ” did you get that? Tell me you got that”. 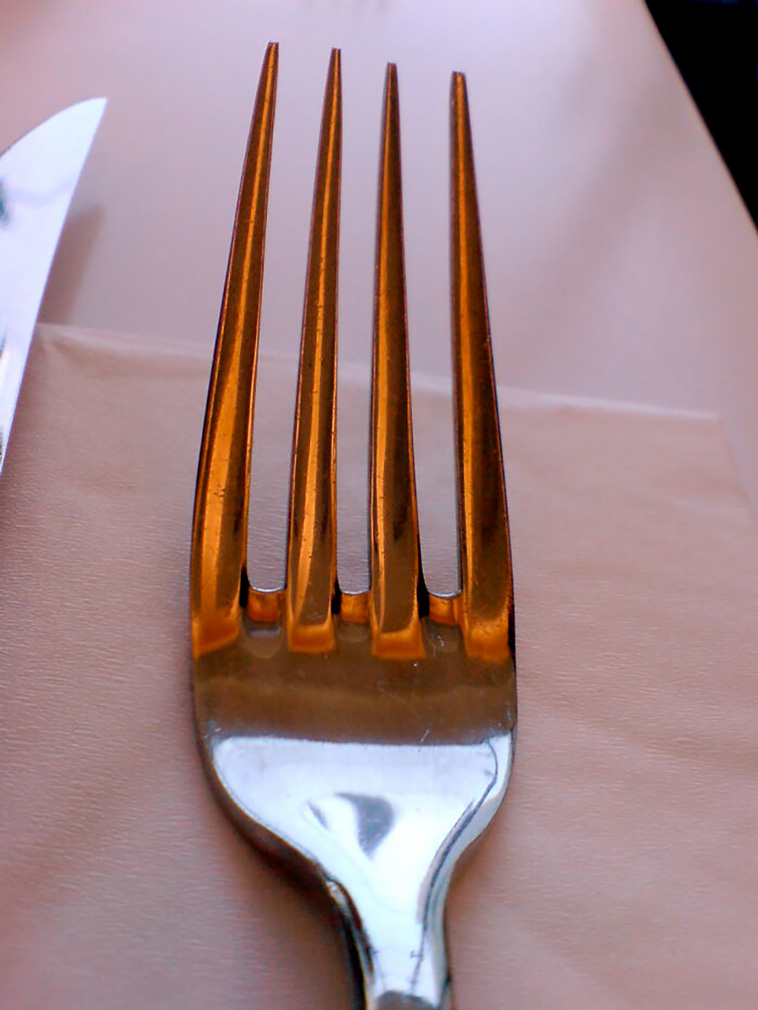 Not sure if this belongs here, since I’m really sure that they got divorced after, but anyway:

I was helping out at my parents restaurant where a huge wedding party was hosted. I was busy serving drinks and suddenly loud yelling and screaming startet right behind me. Turns out the bride had somehow found out that the groom had hooked up with her sister right before the wedding ceremony (and apparently on a few occasions before) and in her anger she stabbed him in the chest with a dinner fork several times.

We had to call an ambulance and the police. It was like hell 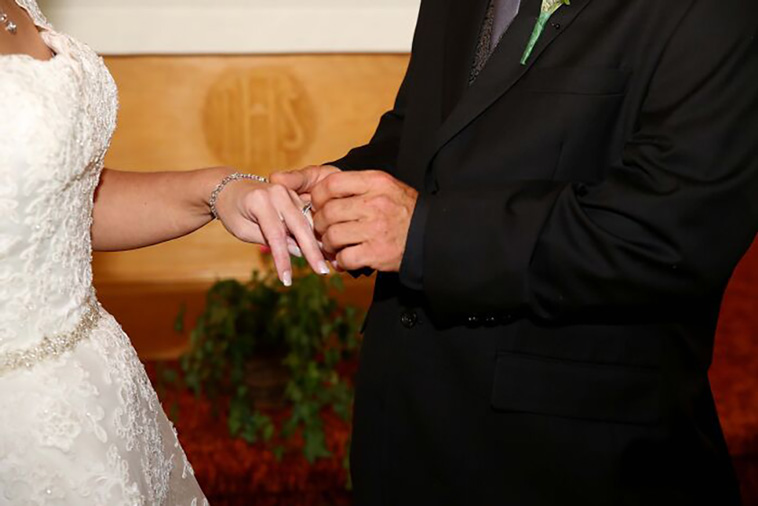 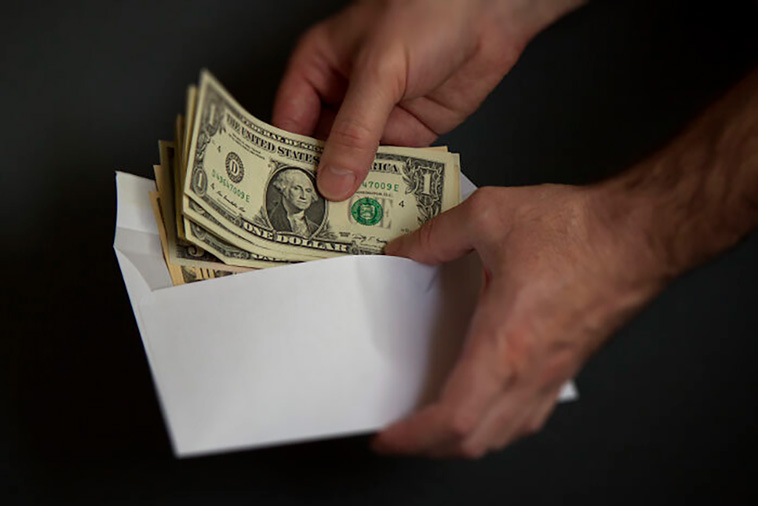 When the bride and groom argued over why the grooms mother shouldn’t get all money given to them on their wedding day. Ya that was a red flag. 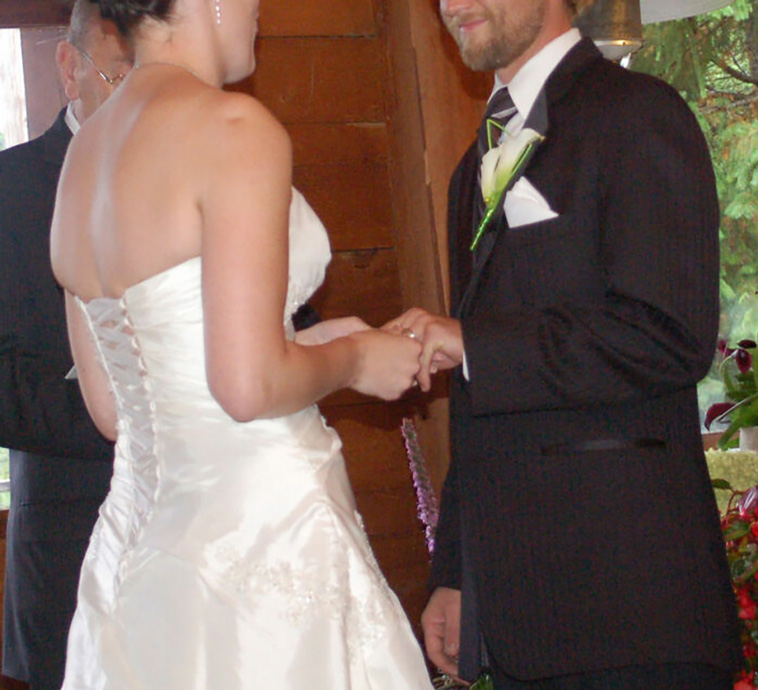 I perform ceremonies as an officiant, and know other officiants. The worst (IMHO) are the weddings that are just a bad idea. The couple is young, inexperienced, and selfish. I mean, even courthouse weddings can last decades, but if you have a wedding that is clearly not planned out, they are often not though out as well. Weddings that are rebellious as a “f**k you daddy, I am 19 and marry who I want!” I give about 2 years, especially if the bride and groom are out of sync with one another, or one just looks like “this was the other’s idea primarily.”

Oddly enough, weddings with cheesy themes (Star Wars, Elvis, etc) last longer than the traditional styles. I have theories on that, but don’t have enough data that’s not anecdotal to back it up. But I think casual weddings where everyone is relaxed, happy, and having a good time because the wedding is about celebrating rather than ceremony will last the longest.

A sense of humor helps. If both the bride and groom are relaxed and silly with one another, those last the longest. 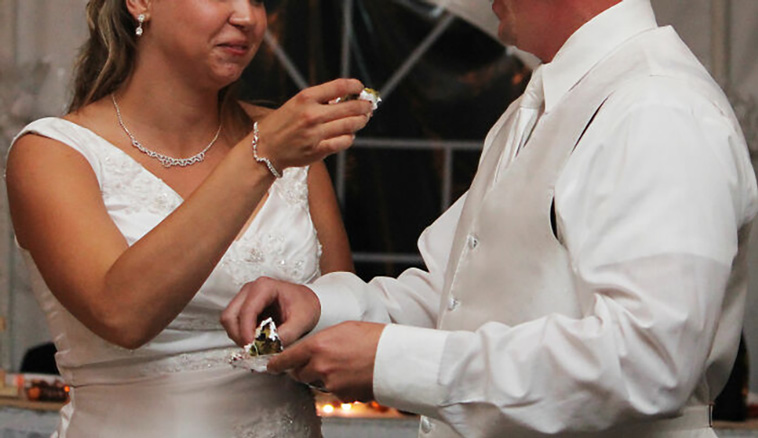 It was the third time the bride had hired me and all the guys had been carbon copies. 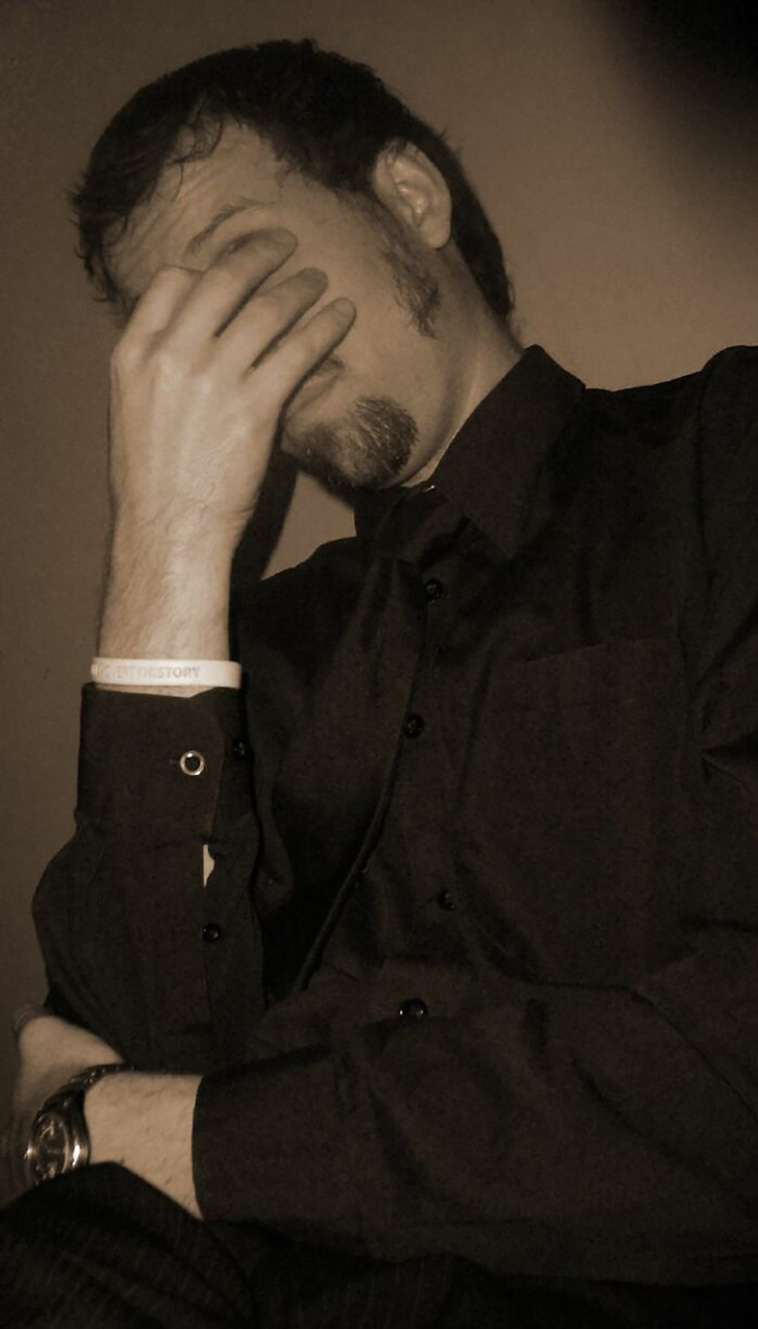 Ugh I photographed this awful couple. She was a sour cow, barely cracked a smile and all day she was following him round saying “Maaaark! Get my shoes! Maaaark! Where’s my bag? Maaaark!” He looked completely miserable and barely spoke all day. At one point we asked them to kiss for a photo and she said “Oh, we’re not that kind of couple.” 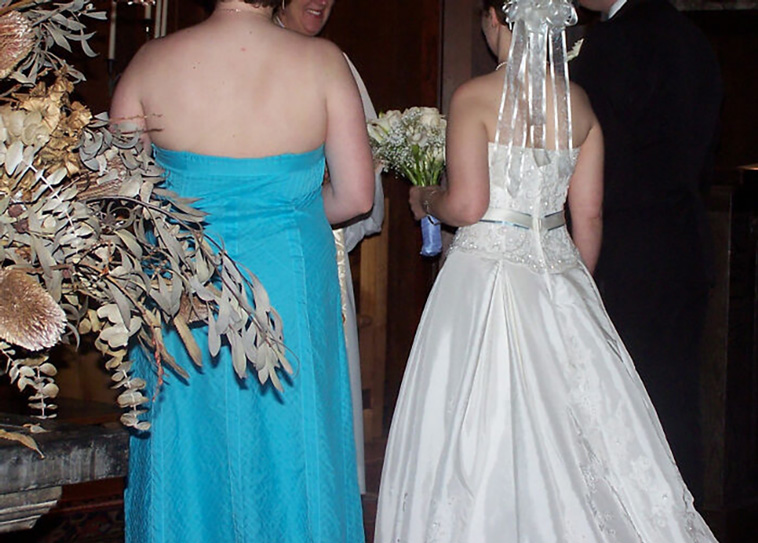 Night before the wedding, the bride-to-be tried to sleep with me on her stag night, crying on my shoulder she wasn’t ready for marriage.

Even my 18 year old hormonal brain did a big NOPE there. They lasted a year.