I didn’t want ANOTHER dog. We had a new baby, and two older dogs to care for and I didn’t want another dog… My cousin told me about a puppy that needed training help (I’m a dog trainer). The owners said their new puppy was aggressive, manic and they called her a ‘devil dog’. I suspected that this was just a normal puppy that was doing normal puppy biting. The story started to unravel – puppy was being kept in a crate, no one was playing with puppy, puppy was having food and water withheld, puppy was peeing a lot, puppy was eating her own poop. Owners had started to really neglect the puppy and…. They didn’t want her anymore. Cut to me picking up a 3 month old puppy from the airport, a little underweight, very friendly but a little scared, and bringing her home. To say it was busy was an understatement. This puppy needed extra help to learn good manners, potty training was a challenge and I had a 6 month old baby at the same time. I thought to myself, what have I done? I was tired, frustrated, and overwhelmed. That is just all a fuzzy memory now. We have a beautiful, loving, silly, fluffy dog who is my daughter’s playmate and best friend. ❤️ 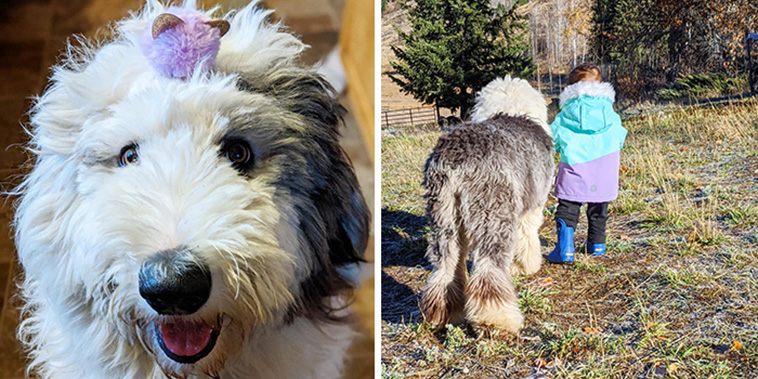 “Don’t you think 4 dogs is too much?!” As you can see, he clearly still feels like a 4th dog is excessive 😂 he even calls her “Princess Cutie Pie” 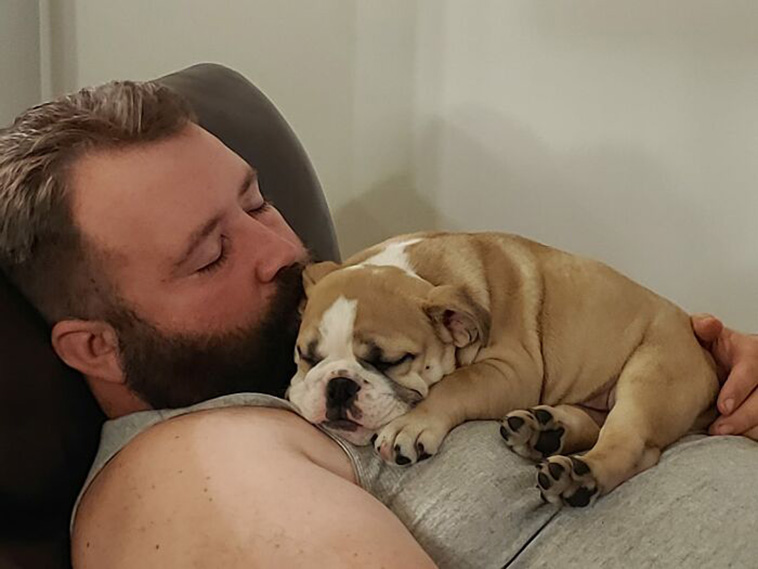 Its not that I didn’t want a dog, I just wasn’t ready. I was in a fairly new relationship and my life was just beginning to settle down. Then one day at work I got the phone call… “Jen, you know the one eared doberman puppy I told you about? She needs a home and you are the only person I know who could raise her and well. They need to get rid of her ASAP and the second option isn’t looking good”. I explained with work etc and my small flat that I wouldn’t be good enough but with a couple of hours, I was convinced. “Okay, I’ll foster her and find her her forever home, I’m not ready for the commitment” One hour in, the little devil bit like mad, scratched. Tore apart everything in her track. I knew “no one will be mad enough to take this dog on”. 6 months later my engagement collapsed. With my work and my money and small space, I have to find her a better home. I rang my friend crying. “Jen, you and your home are all she has ever known. You are the best place for her”. 2 months later he breaks in with a knife and attacks us. She defended me. I knew, no matter what, I had to stick by her like she did me. We worked so hard on her behaviour. I halved my hours, I learned to budget and now 2 years on almost to the day, she is still here, by my side, my best friend and the best thing to have ever happened to me. With persistence she turned into the sweetest most loving lap dog. I’m grateful for her every single day. 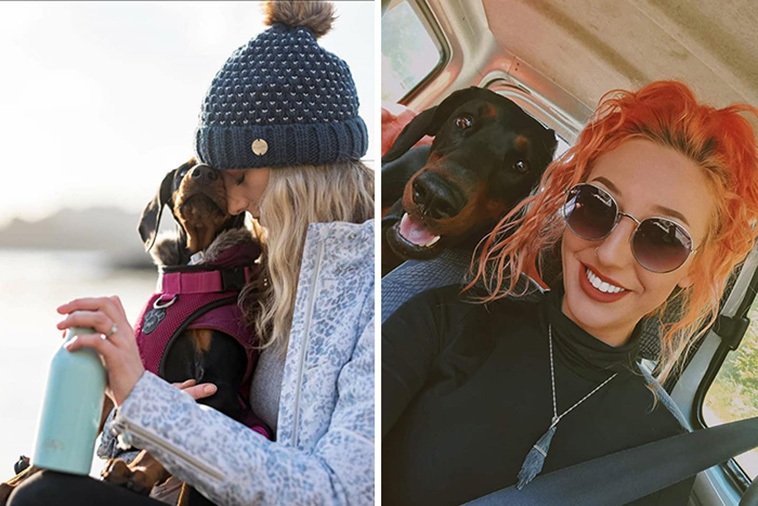 “I don’t want to adopt a senior dog. She’ll break our heart one day soon.” He even made me take her back and was livid when I ended up bringing her home a second time.. It took awhile but the laughs she created in the home replaced the feelings he had before.. She broke our hearts 9/4/20 💔 If you ask my boyfriend, he’d say he wouldn’t trade those 2 years with her. We would do it all over again. He’s gunna kill me when he sees this though. Rest In Peace Ms.B 👼 🐾 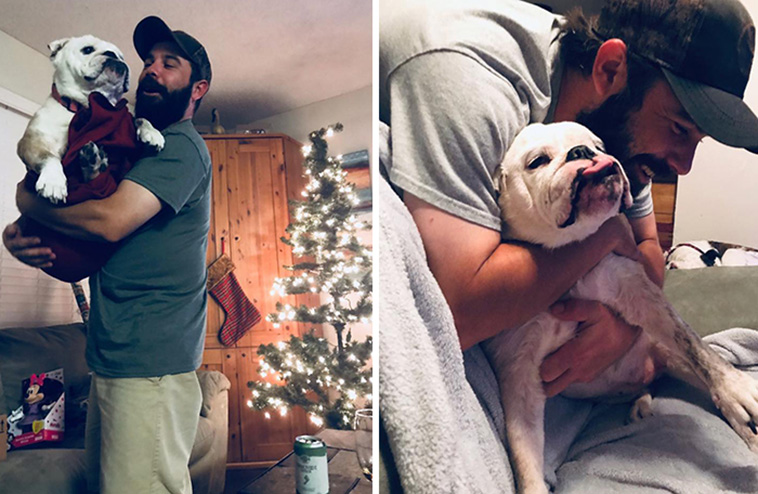 Husband before: “Listen, if the dog barks like crazy, sh**s in the house, or destroys things we are bringing him back” Husband now: “Wrap him in a blanket, he’s cold!!!” (Honestly I think he would pick Thanos over me, his wife!) 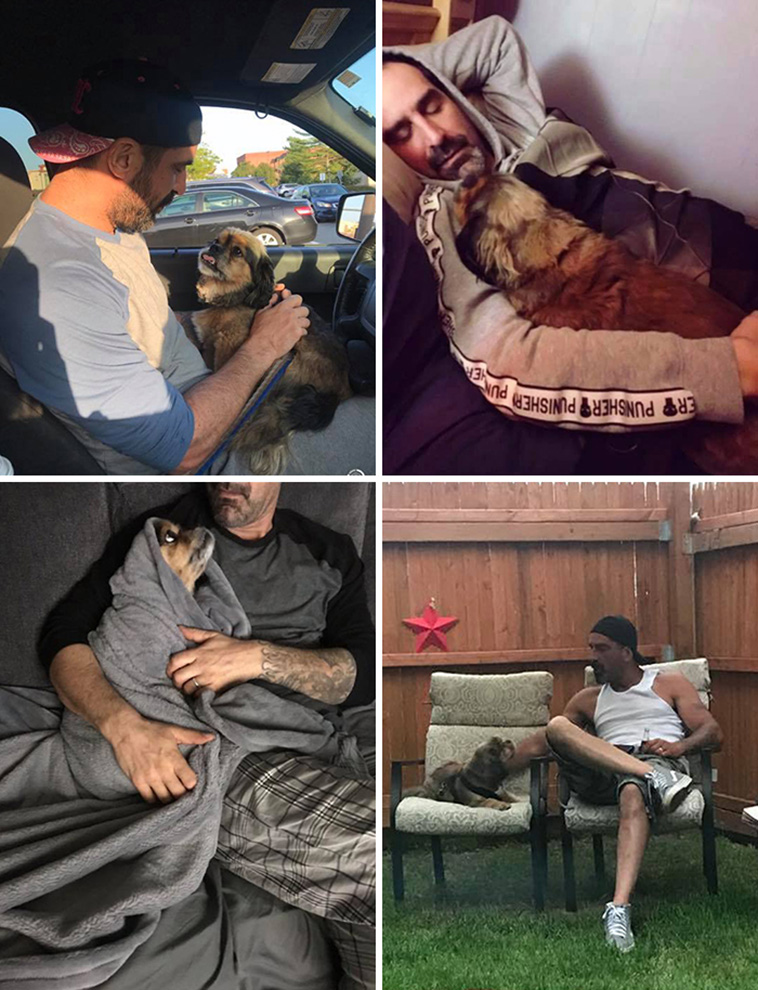 When I moved out of my mom’s into a house with my fiance, I was admittedly on probation. I was fighting an addiction and in no way did I want any more responsibilities. I have always been an avid dog lover and one day I was sad and craving puppy snuggles. I jokingly posted on Facebook that I had puppy fever, not expecting anything from it. Then someone posted a picture of the white dog, now named Stella, on the post saying she needed a new home. I didn’t want a dog, at all, but I kept thinking about her throughout the day and finally made a whirlwind decision to bring her home with me. Then the grey dog, my Little, my fiance wanted his own puppy and a friend for Stella and I was completely against it. He goes and finds a puppy anyways and I again fell in love. She has dwarfism and a plethora of other health issues which is WAY MORE than I wanted to take on, but she is my baby and I love her. If you read this far, there is a very short version of my story. This picture is already four whole years old, so not wanting a dog turned into having two, four year old American Pitbull Terriers running around my house and they have saved me in more ways than I can count. Best decision ever. 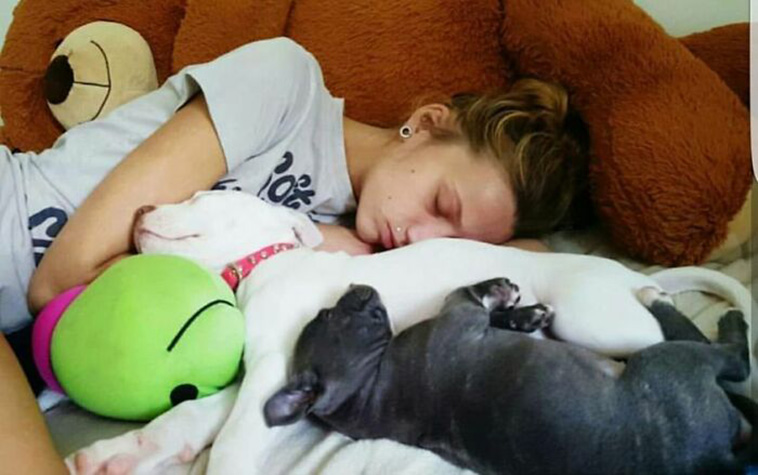 Me: I’ll always have at least one dog. Future husband: I’m really more of a cat person, but you do you. Me: I’m going to start fostering dogs, in addition to the three we have. Husband: 🤦🏻‍♂️🙄 fine, but I’m not getting involved. Me: I have a post-op foster. She’s very sick, idk if she’ll survive. She’ll probably be with us for a couple months while we rehab her for adoption. Husband: don’t get attached. Me: she’s cardiac stable & cancer free and ready for adoption! Husband: you’re not giving away my dog! 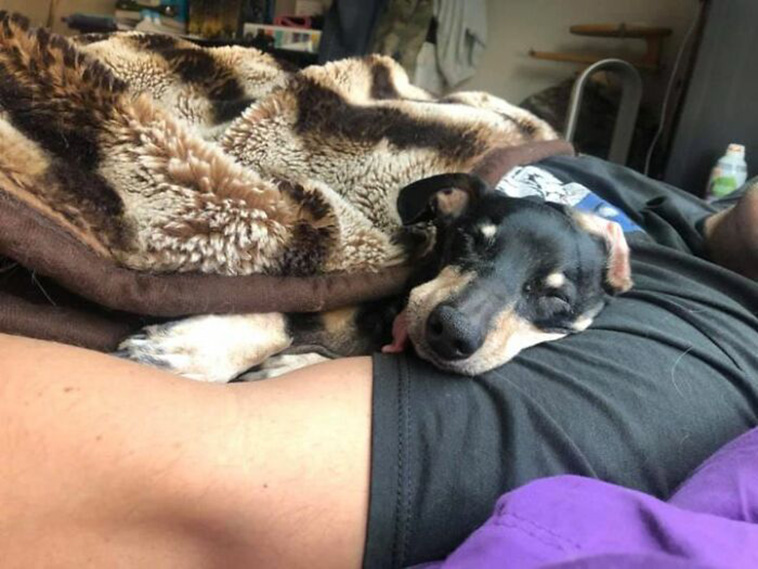 This is Josie. She’ll be 10 on Christmas Day. She started out being adopted as a puppy by my friend’s brother and his wife. They realized pretty quickly they’d made a mistake and she went to my friend. She already had an elderly pup and couldn’t keep her so, they started trying to find a home for this girl to go to. I couldn’t bear to watch her go to just some random family so, I called my parents and asked if we could take her. My mom always said that if she got a dog, it would be a lab and I couldn’t imagine this being more perfect of a situation. After several no’s and them basically telling me if I wanted a dog, I should move out, they agreed to let me keep her. My dad was always a cat person and really never wanted a dog. It took him a little while to warm up to her and the idea of having a dog in the house but he eventually settled into it. Fast forward a few years later when I was finally moving out, I asked my dad what he was going to do since I was moving out and Josie would be coming with me. His exact words were, “F you, no she’s not.” So, I moved out and she stayed with my parents. Fast forward another few years and my dad was going through crippling and debilitating back pain to the point that he just became a miserable ball of depression. But the one thing that always cheered him up was all 70 pounds of Josie climbing up onto his lap for a snuggle. My dad is a bearded 6’3, pushing 300 pounds, military man who intimidates people just by looking at them but his voice can reach an octave I never thought was possible when he calls over “Josie dawg.” She’s always by his side, especially when she gets to go in the truck to go to Tim’s (Tim Hortons) where every employee knows who she is. They hear my dad’s voice at the drive thru speaker and always end the order with, “And a Timbit for Josie?” 10 whole years with this girl and we know it won’t last forever. She’s the best thing that could have happened to our family, especially my dad, and we didn’t even know we needed it. 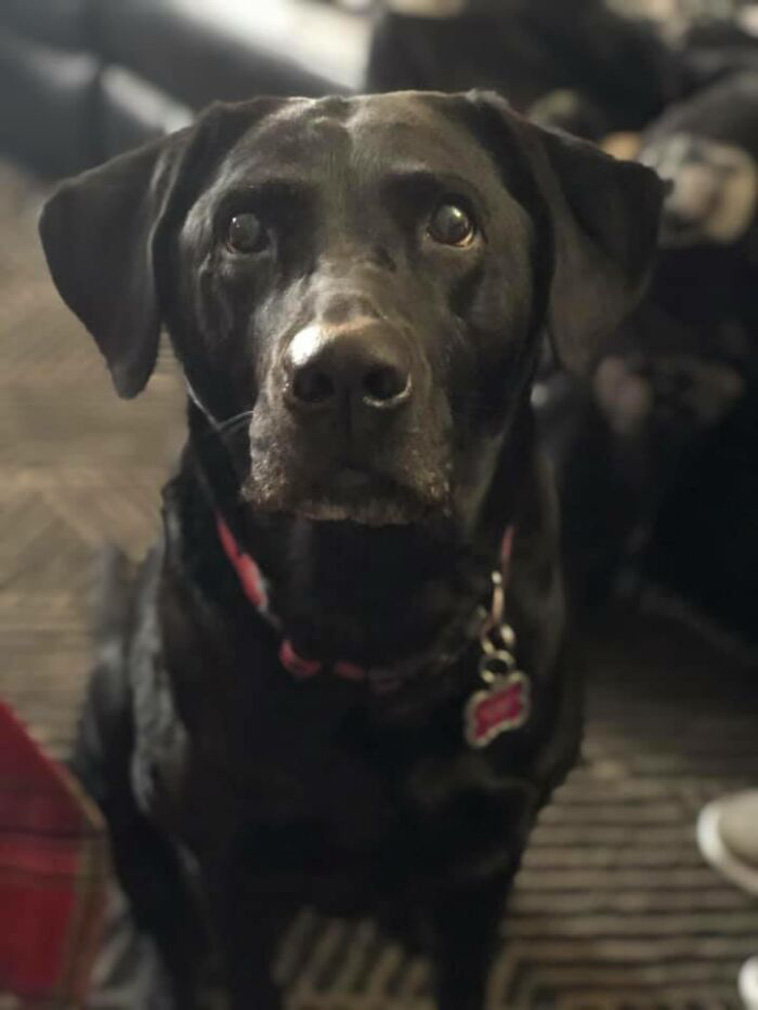 Sept, 2018 HW: (to deployed husband) Best friend has the kids for a little while. I’m going to go to the farm and grab some pumpkins for jack o lanterns. (2 hours later) HW: (sends first two pictures to husband) Husband: That’s not a pumpkin. Just what is that?! There was an adoption event at the farm, full of puppies and this wretched creature. A volunteer tried to talk me out of her, citing her bad eyes, bad teeth, and bad hip, even her graying hair. Well I too have bad eyes, bad teeth, a bad hip, and graying hair. Someone had left her at the shelter as we evacuated from hurricane Florence. I don’t know how old she is, or even what she is, but I know I don’t know what I would do without her. 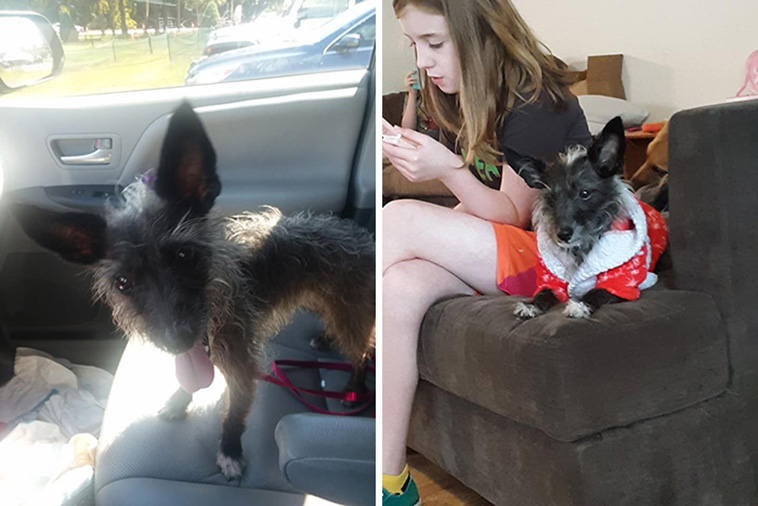 It had been six months since our dog of 15 years passed. Mom, brother, and I were still not over it, and were desperate for a new dog to fill the hole in our hearts. Dad was not so convinced. On a stroke of fate, I came across Jade on a local rescue page. Mom and I filled out the application, and we got a day to meet Jade as a family. On the day of, almost as if she knew she had to convince him, Jade ran to Dad for cuddles. First thing out of my dad’s mouth: “She’s too small.” Flash forward a year, Jade became his “tiny princess,” and has never looked back. 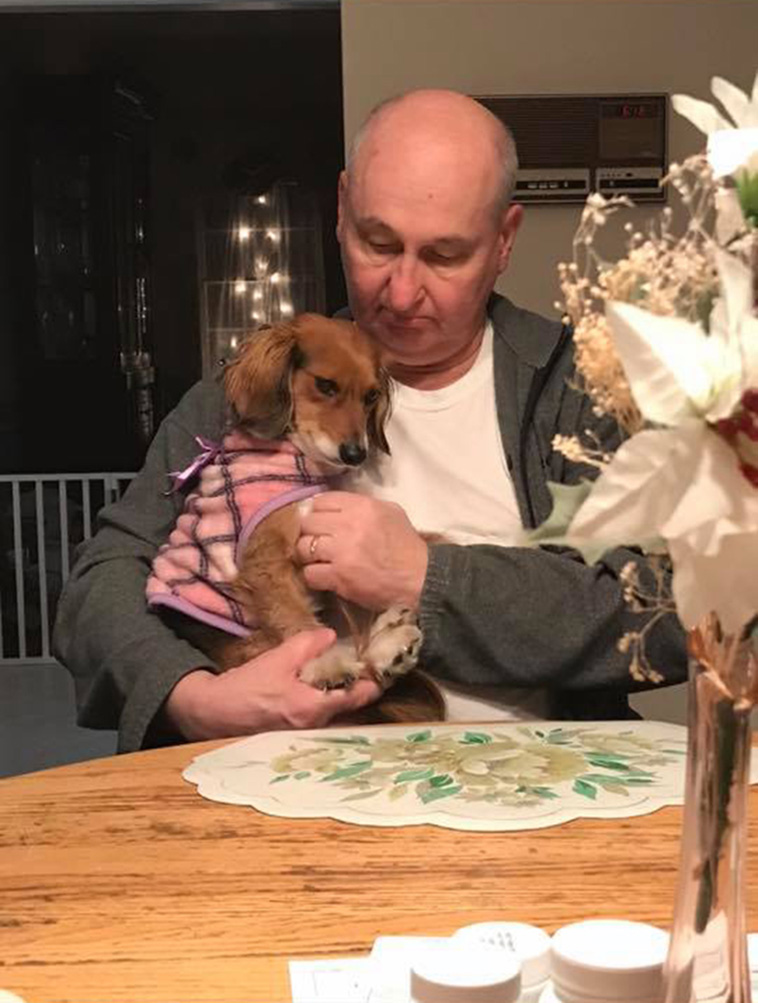