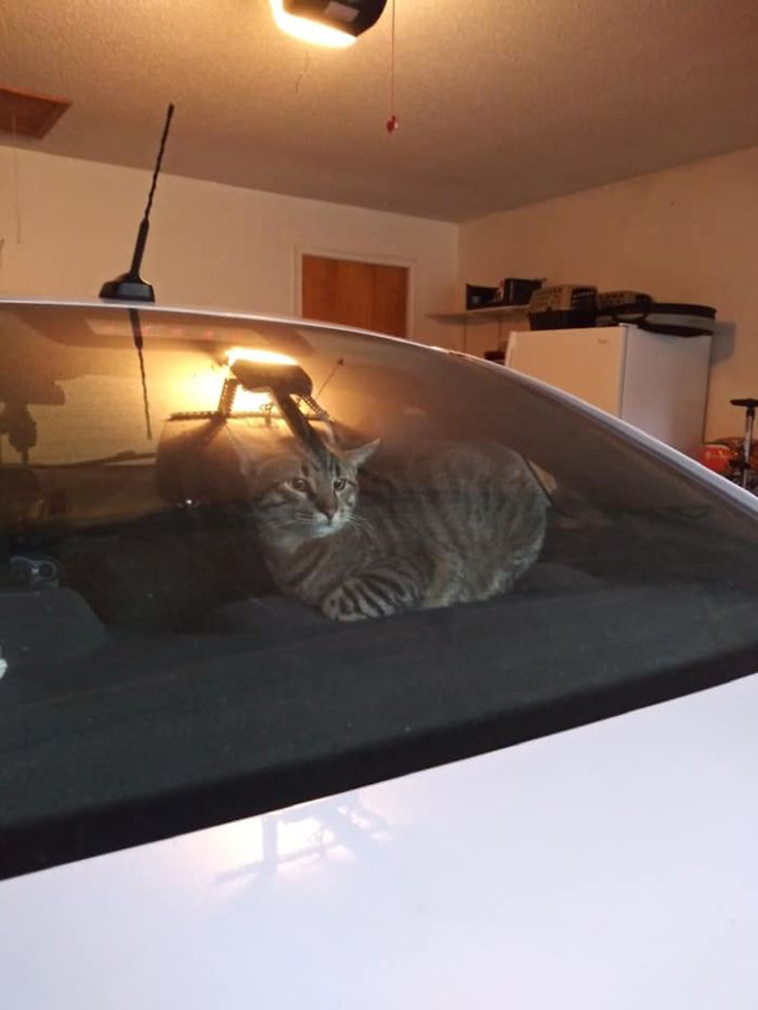 He belonged to the neighbor, but she never let him in the house, so I created a place for him in my garage. I left the windows down one night, this is what I came to the next morning.

I haven’t seen him in close to two months, when today, I see him up for adoption on a cat rescue site listed as a tripod (he recently lost a leg). They called him Sammy , which was the name of my neighbor’s cat. I’m so excited to have found him again. So, I put in an application to adopt him. Maybe he’ll actually be my cat after all

22. The Mama Cat Who Had Babies In My Garden Shed. She’s Ultra Friendly And Her Babies Are Thriving! We’ve Got A Few Friends Interested In Adopting Them, But I Think We *might* Keep Them 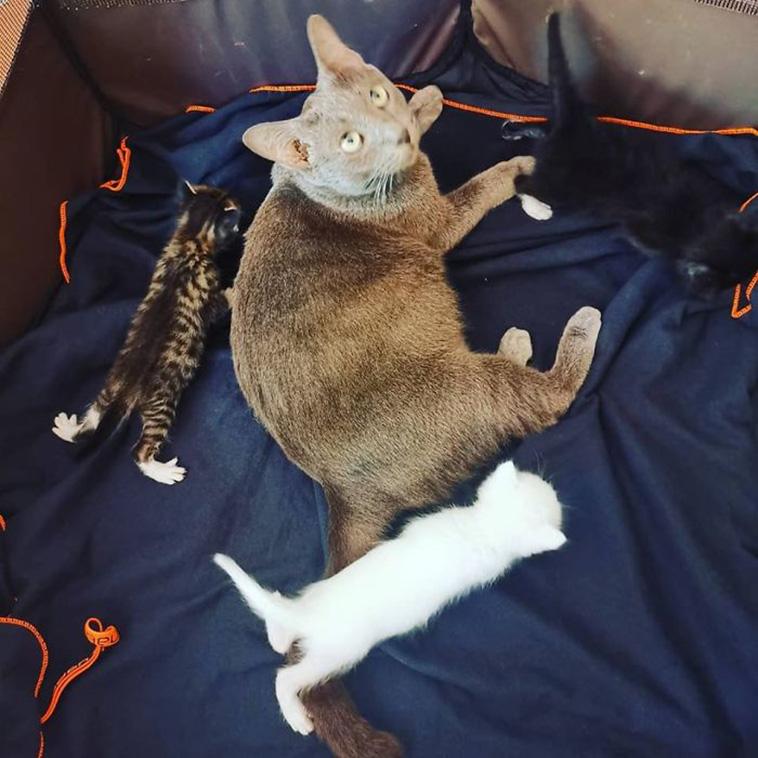 23. My GF Ask Me Why Did I Put A White Cat In Our Laundry Room, Didn’t Know What She Was Talking A Out, Send Me The Pic Felt In Love With Cat, Cat Is Now Part Of The Family 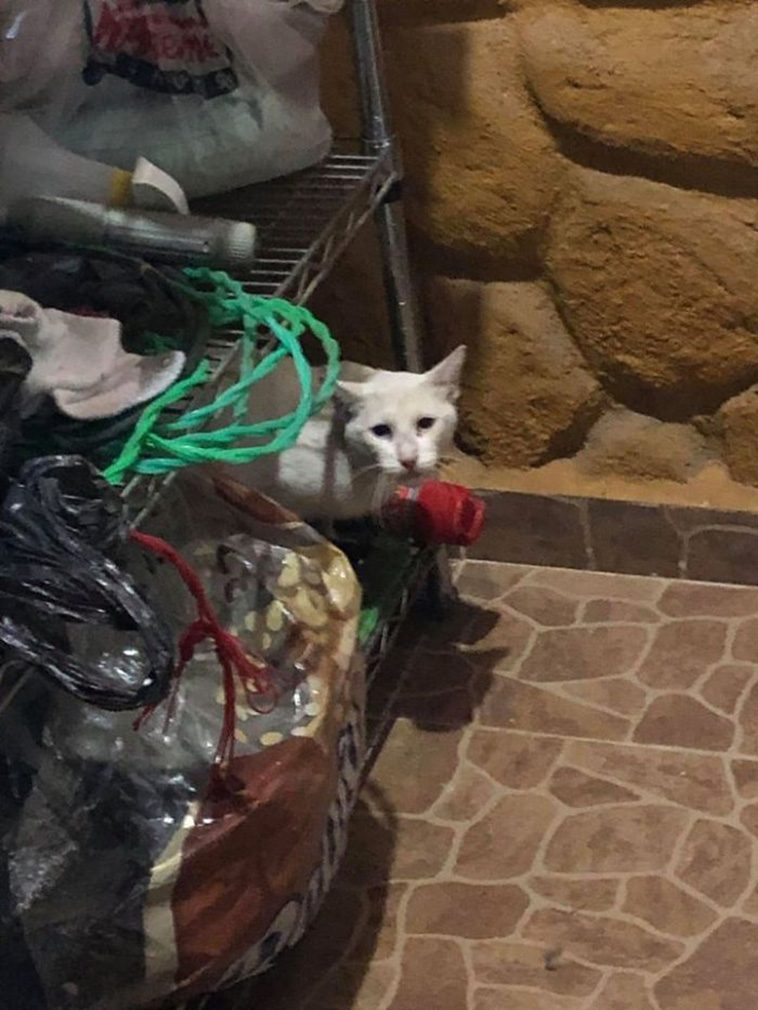 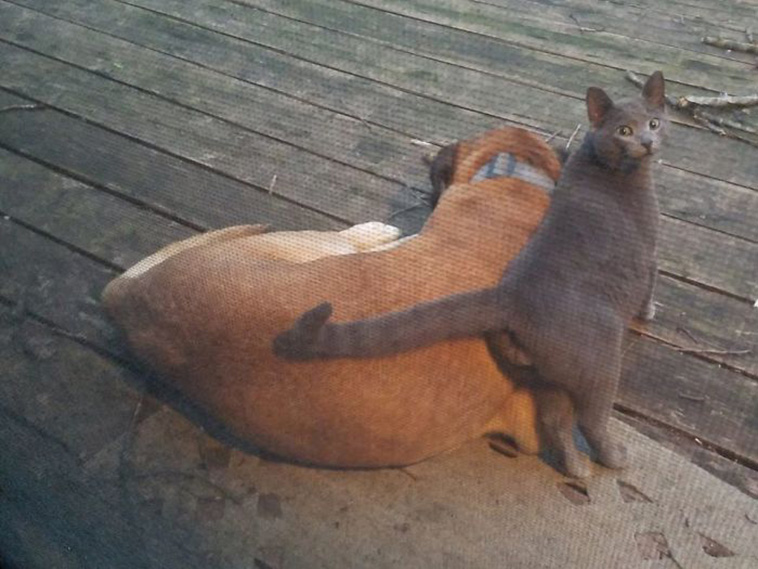 26. My Stroller, Not My Cat. This Is Ralph. Ralph Decided He Wanted To Hitch A Ride Around The Neighborhood 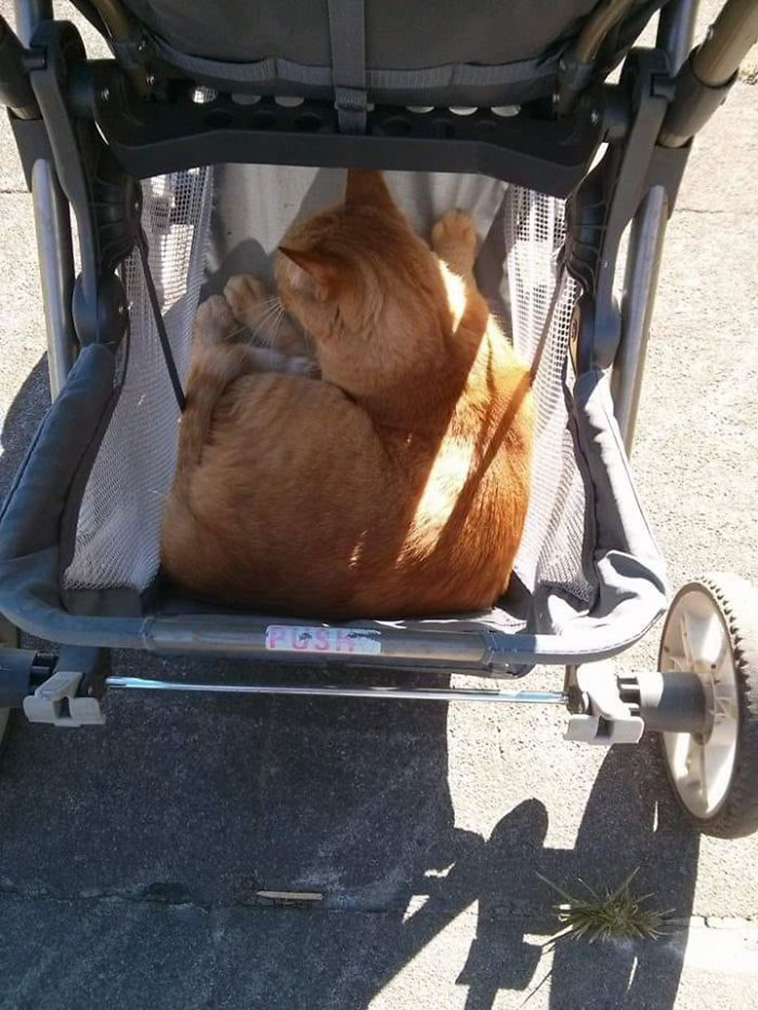 27. This Beautiful Girl Visits Almost Every Day For Breakfast! We’ve Named Her “Magic” 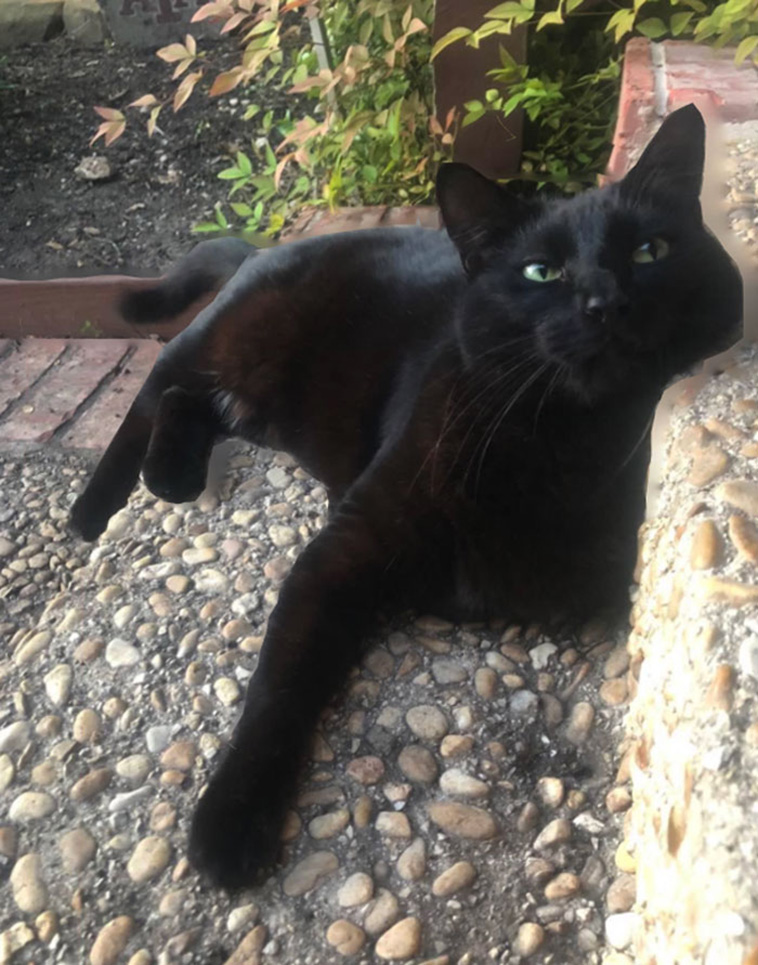 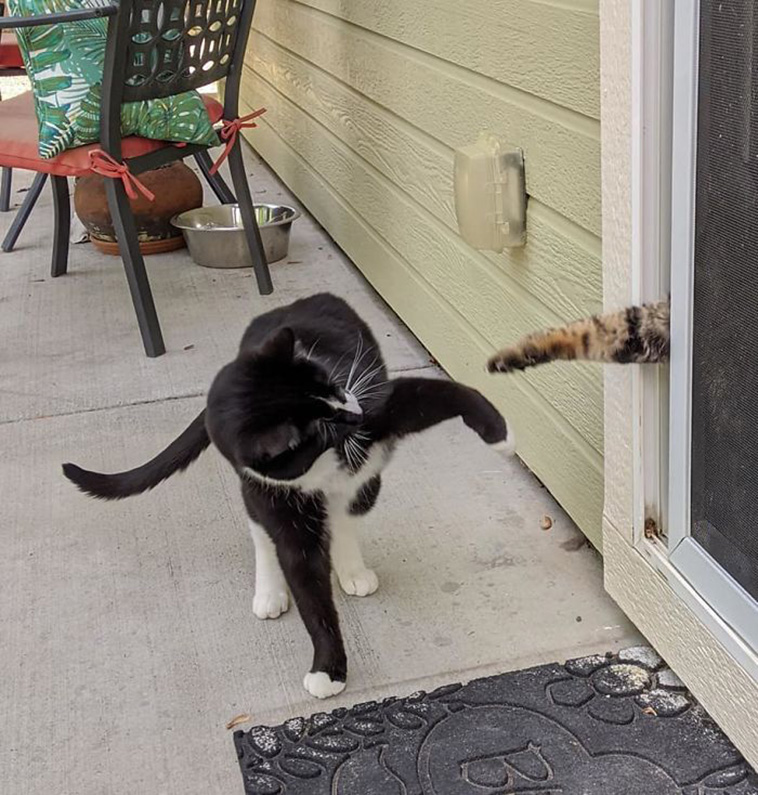 THIS is Tux! His family moved in behind us late last year & he comes to watch us through our glass door multiple times a day, for hours at a time. He waits patiently for one of my two cats to come out OR for my youngest (arm pictured) to deliberately open the screen door to let him in.

29. Last Year We Met This Orange Goofball While Walking Our Dog, Justin 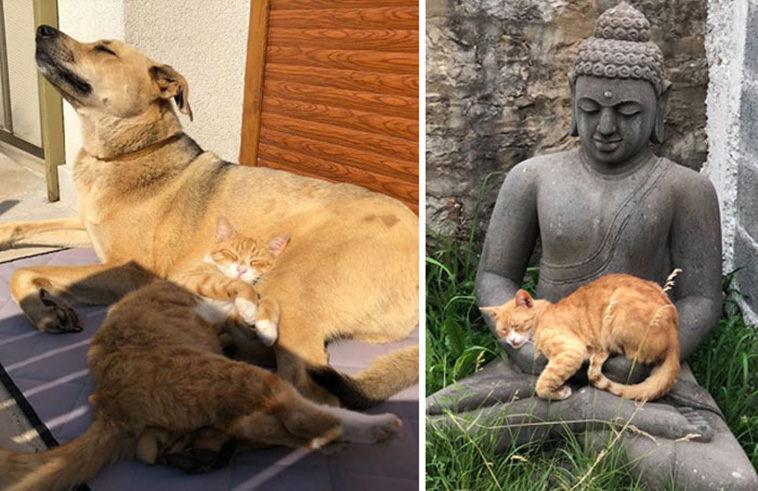 Justin is NOT a fan of cats and usually will chase or lunge at them when given the chance. Well to this little guy, it mattered not. He wouldn’t be intimidated and insisted that he and Justin would be friends. After a few weeks this was the case. Justin was won over. Then, he turned his attention to my wife and I. Gordon, as my wife named him, started stopping by the house to say hello. This progressed to stopping by for a bite to eat and a place to sleep for a couple hours. We found out that this was his MO up and down the block. He didn’t really belong to anyone, he wandered freely in and out of houses and was fed and offered places to sleep wherever.

Several months later we came home from a week away and poor Gordon was on front step of our house looking VERY ill. I took him to the vet and they told me he had a kidney issue that would require IV fluids for the next week. So dutifully Gordon and I went to the vet and they’d hook his little arm up to an IV and he’d curl up in my lap and let it happen. The vet said that she wished all her feline patients were as willing and accommodating as Gordon.

After his health scare, Gordon got back to doing what he did best and ate/slept/caroused around the neighborhood. Then in January of last year he went missing. No one in the neighborhood knew anything of his whereabouts. It was and remains an absolute crusher for me. He was the sweetest little orange guy and I’m sure that he came to me when he was sick because he knew I would help him.

I can only hope that someone said, “This cat is too awesome to live on the streets!” and took him in forever. Regardless, my heart aches knowing that I’ll likely never see him again. Gordon, I hope you’re out there curled up on someone’s couch enjoying your best life. Miss you my friend! 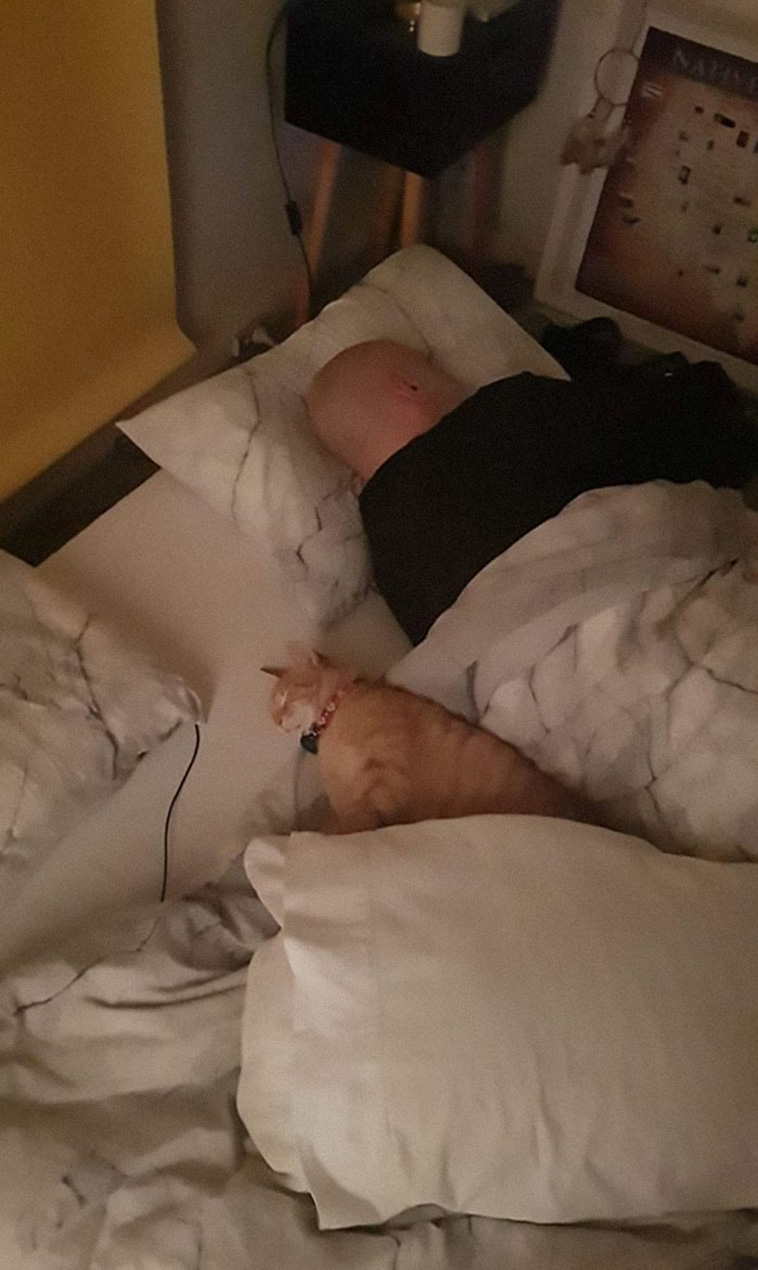 Tigger, month six (lol). One day in summer we left our front door open and in came Tigger. We called the number on the tag, met his real parents (one street over), and we thought that was that. Wrong! Tigger comes over twice a day minimum, sleeps over, the whole bit. We are HIS pets