Time magazine photographer Joakim Eskildsen was commissioned to document life below the poverty line. What he discovered was shocking

We all have heard about the American Dream, but is it really happens? There is an American Nightmare beyond the dreams and this harsh reality reveals day by day for everyone. Joakim Eskildsen decided to capture this reality and displayed it to everyone with a book project, American Realities, in which Natasia del Tora helped with stories. 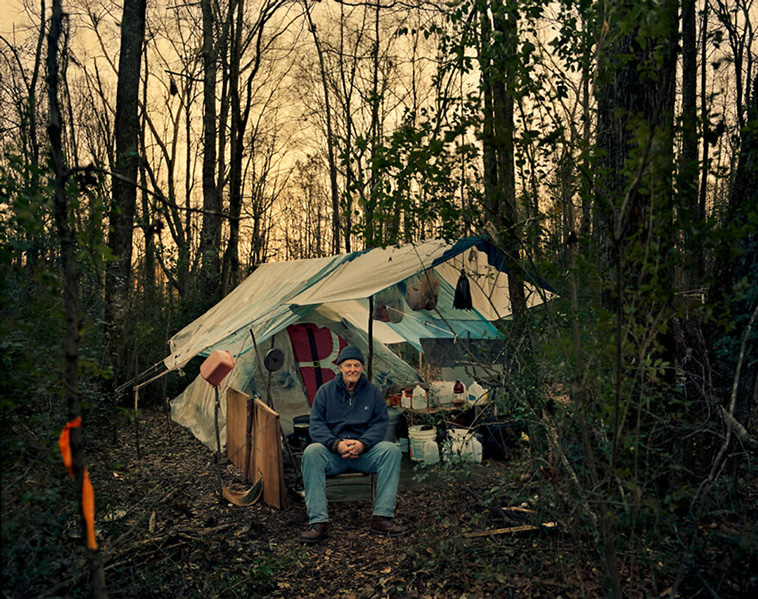 Terry Fitzpatrick lives in a tent in the woods next to a shopping plaza. Rather than being homeless, he considers himself more of a “city camper” and says his situation is temporary. Terry, who is sober, chose to remove himself from other homeless people to stay away from alcohol and keep his peace. Since his mother died, he says he is trying to get his life in order so that he can move forward. 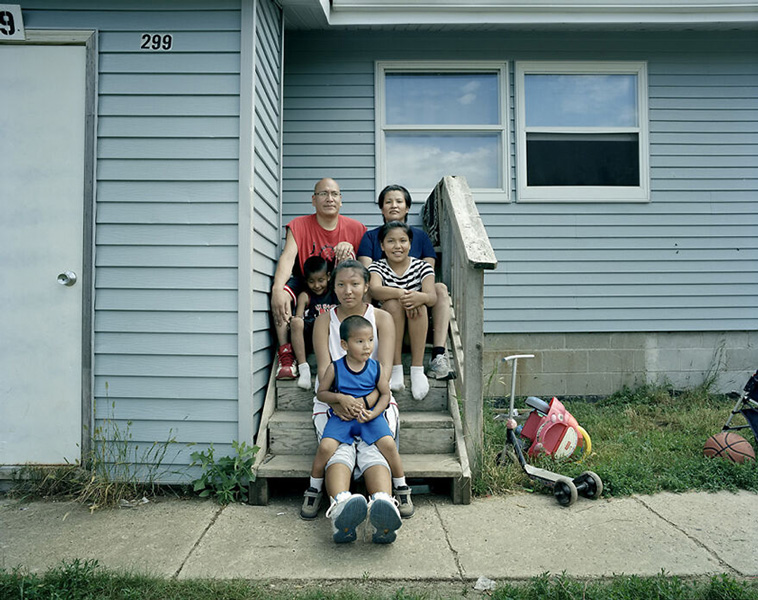 Mary Grass sits with her husband Shannon and three children, Spirit, Mystic and Decimus at their home in Thunder Butte, South Dakota, a remote community on the Cheyenne River Sioux Indian Reservation. A military veteran and a skilled medical technician, she had applied for several jobs but wasn’t having any luck finding work. She was also taking an online course to get a Bachelor’s degree in Science and Health Administration, hoping that would increase her chances. Her husband was able to find a temporary job in the nearest town, Eagle Butte, 40 miles away, but transportation costs were eating up most of their income. With a lack of jobs, lack of housing, and long distances of up to 90 miles between communities, opportunities on the reservation are limited. They were relying on government assistance, including WIC, Medicaid, and food stamps to make ends meet, though Mary said their pantry was often bare towards the end of the month. Despite their economic hardships, Mary and her husband are trying to create a better life for their children by emphasizing the importance of education and the values and culture of the Lakota people, their Native American tribe. Her eldest daughter, Spirit, who speaks Lakota and dances at local powwows, hopes to get a basketball scholarship to the University of Southern California. The family would not be able to afford tuition otherwise.

UPDATE: After more than a year of being unemployed and struggling, things are finally starting to turn around for Mary and her family. A new hospital in Eagle Butte opened up job opportunities on the reservation. Mary is working there as a lab technician making $18.69 an hour. She also finished her bachelor’s degree. Her husband still hasn’t been able to find work, but he stays home and watches the kids. She says they no longer rely on food stamps, but they still use Medicaid and WIC for her youngest son. 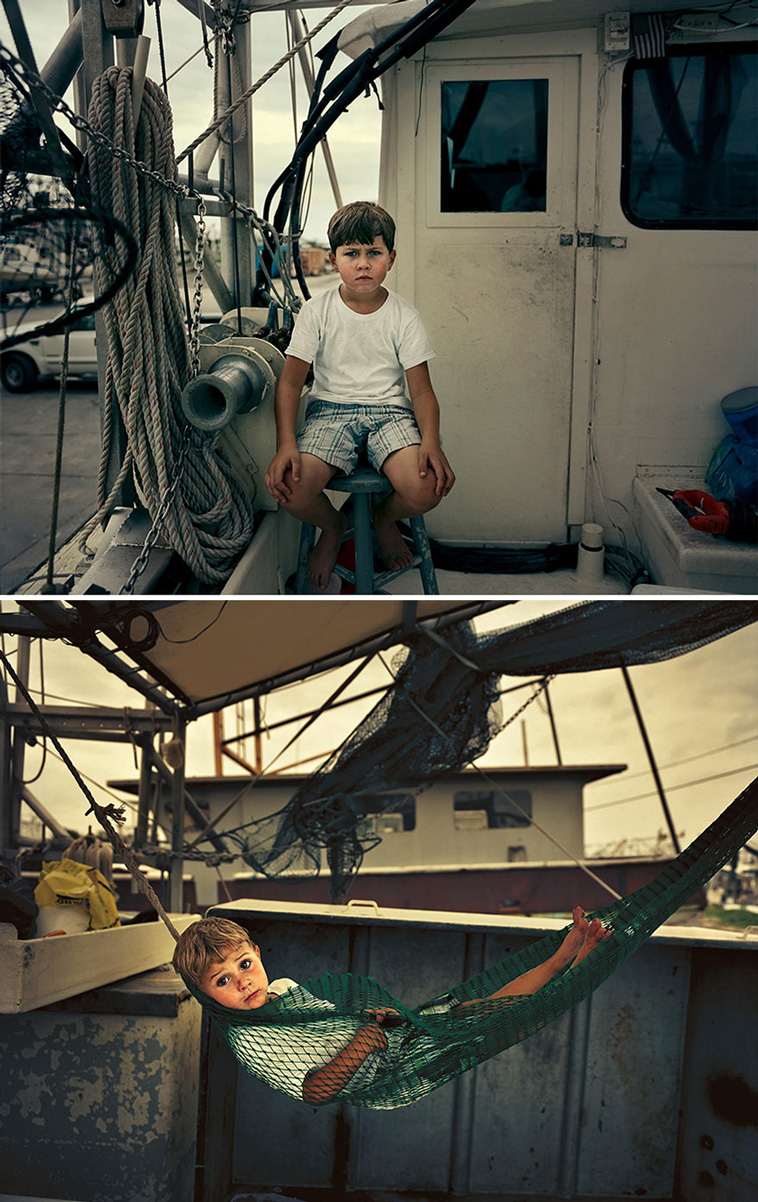 3-year-old Eli Stockstill and his brother DJ often stay on their grandparents’ shrimp boat that sits in a lot out of the water for maintenance. Darla and Todd Rooks, longtime Louisiana fishermen, moved into the 40-square-foot cabin of their boat after the BP oil spill, because they were not sure they would be able to continue paying their lease. Before the BP oil spill, they used to make a good living, eating healthy food from the sea. Now, fresh seafood has been replaced by canned food, and they have developed a host of health problems, from muscle spasms to skin rashes and memory loss. Even the puddles in which the boys used to play seem dangerous to Darla, who fears the water is contaminated. The Rooks long to go back to their old ways. “I do not want to be the face of poverty,” Darla says. “I do not want to live on food stamps—I just want to fish.” 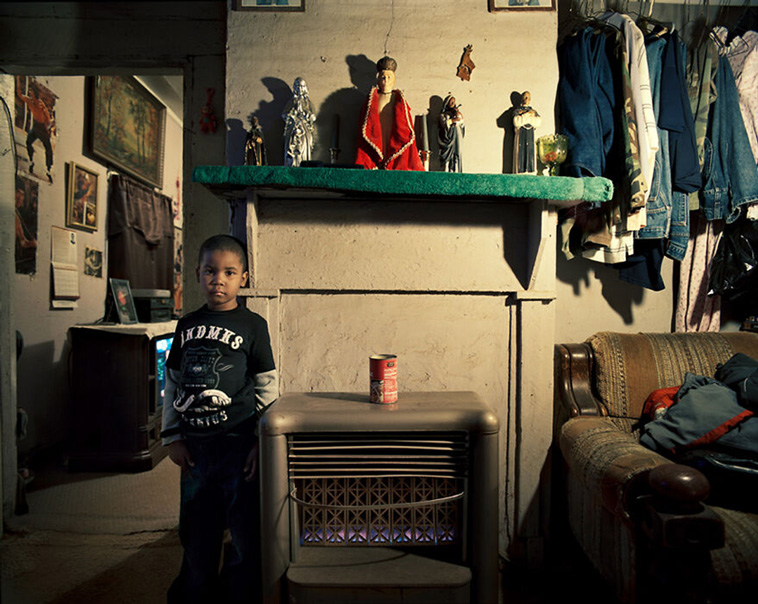 Five-year-old Quintavius Scott stands in his great-grandmother’s bedroom. She often looks after him when he gets out of Head Start, a federally funded pre-school program for poor children. An only child of divorced parents, he lives with his mom, who lost her telemarketing job when the company relocated. She now works at a fast-food fried chicken restaurant while going to school. His dad Quinton works at a car parts store, where he makes $8.25 an hour but is also going to school for his General Education Diploma so that he can get a higher-paying job. He’s proud of Quintavius’ excellent grades and wants him to complete his education, so “he doesn’t fall onto the same path” as his dad. But he worries about his son growing up in Athens and facing racial discrimination, especially by police. “My son could be at the wrong place at the wrong time. He could be killed and nobody would care. A lot of good kids get killed and nobody does anything,” says Quinton. 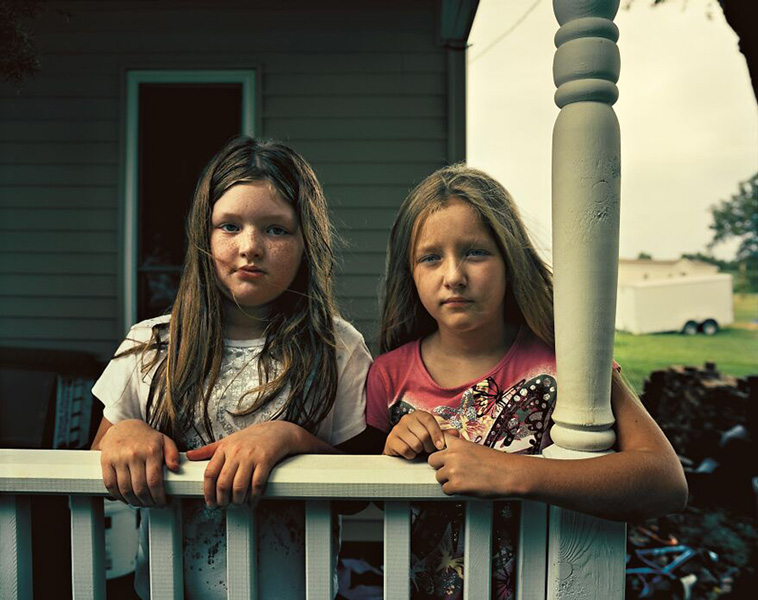 Aleena Arnesen and her cousin Elizabeth live on the Gulf Coast of Louisiana. Aleena’s father is a commercial fisherman, bringing in the freshly caught shrimp Aleena would often eat for dinner. Since the BP oil spill in 2010, the fishermen are catching half of what they used to, and Aleena’s mother Kindra is scared to feed the children seafood. “The federal government says it is fine,” she says, “yet my husband is catching fish with black goo on them.” Kindra, who was one of the clean-up workers after the BP oil spill, thinks the government has procrastinated passing legislation to prevent another spill from happening. The spill has raised concerns over environmental safety and health, and ruined the livelihood of many families. The Arnesens have put their home up for sale and are thinking of moving to a fishing community in North Carolina. 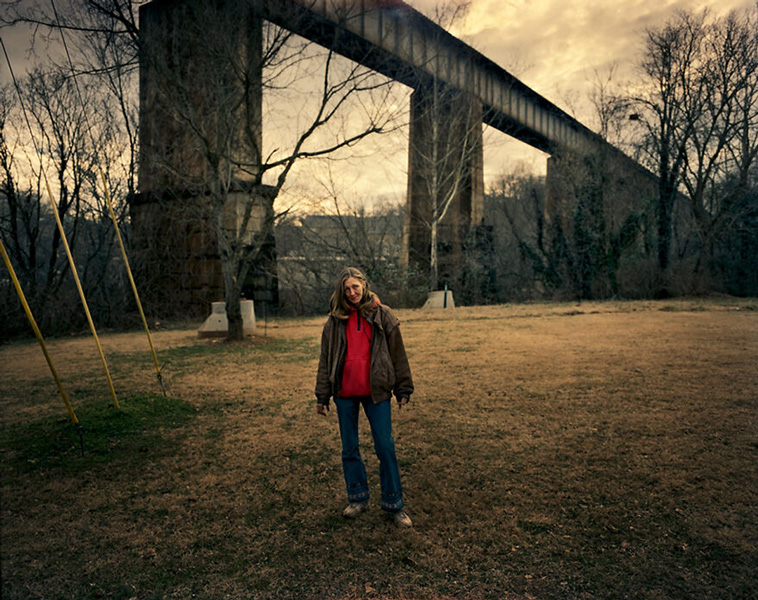 Ruby Ann Smith lives under the North Avenue Bridge where it crosses the North Oconee River in Athens, Georgia. She shares the space with other homeless people who have made an outdoor encampment. A prostitute and a drug addict, Ruby Ann has been beaten, shot, and sexually assaulted. “I am so lucky I am still alive,” says Smith, half smiling, half crying, “I should have been dead ten times by now.” 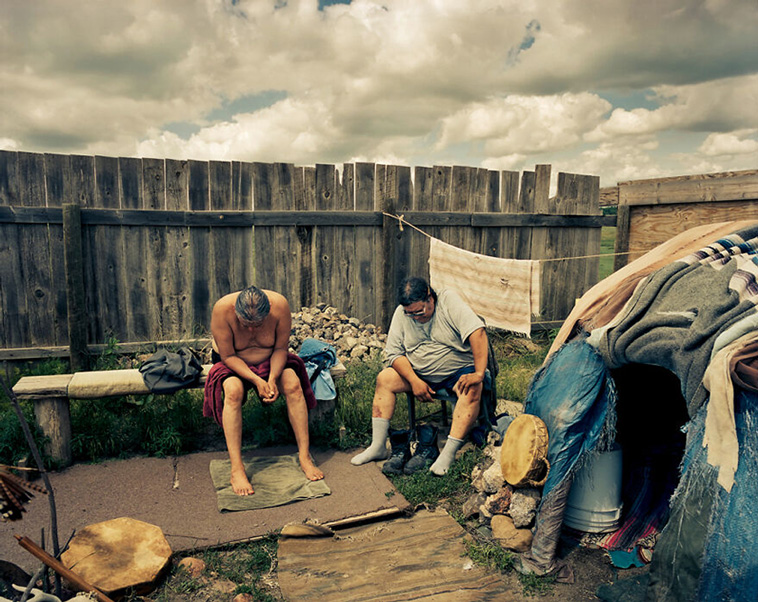 Mike Shaving and Mike Jewett have just participated in a traditional sweat lodge ceremony, a purification ritual in which they pray to the Native American gods and chant inside a dark, steaming-hot teepee. The ritual was illegal in the United States until 1978, but for Shaving, who works for a program that helps low-income families on the reservation in South Dakota, the practice has helped overcome an alcohol addiction. Jewett, who is self-employed and suffering from debilitating back pain, says the ceremony helps him stay mentally focused. “If you concentrate on your prayer, you do not feel anything,” he says. “You think with your heart, not with your mind.” 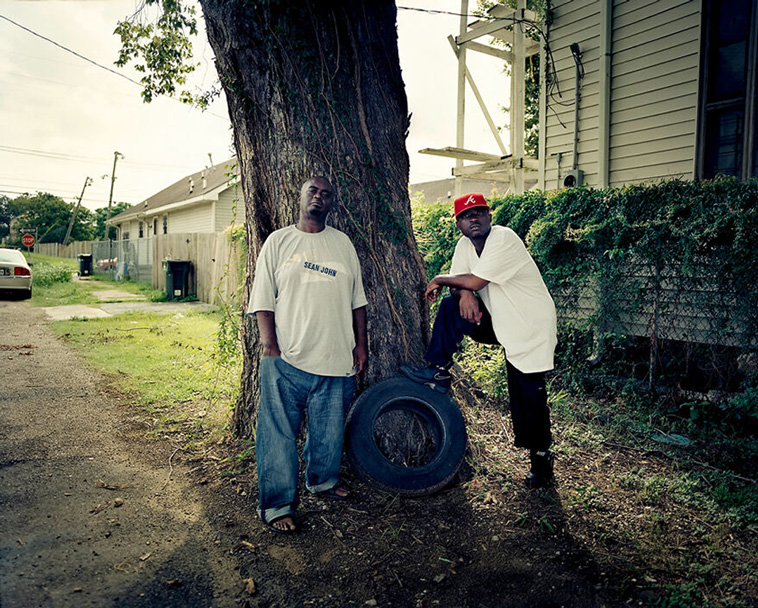 New Orleans natives and cousins Rodney Woods and Joe Berry sometimes walk ten miles to a temp agency to look for work. Rodney, who resides in a two-room shotgun-style home with his wife and four of his six children, used to own a grocery store in the Ninth Ward before it was destroyed by Hurricane Katrina. Joe, on the other hand, worked at a printing shop before Katrina, but moved to Texas after the storm. He has not been able to find a job since he returned. He sometimes sleeps on Rodney’s porch or under a bridge, saying he lives “pillar to post.” His dream is to be a rapper.

9. At The Poverello House 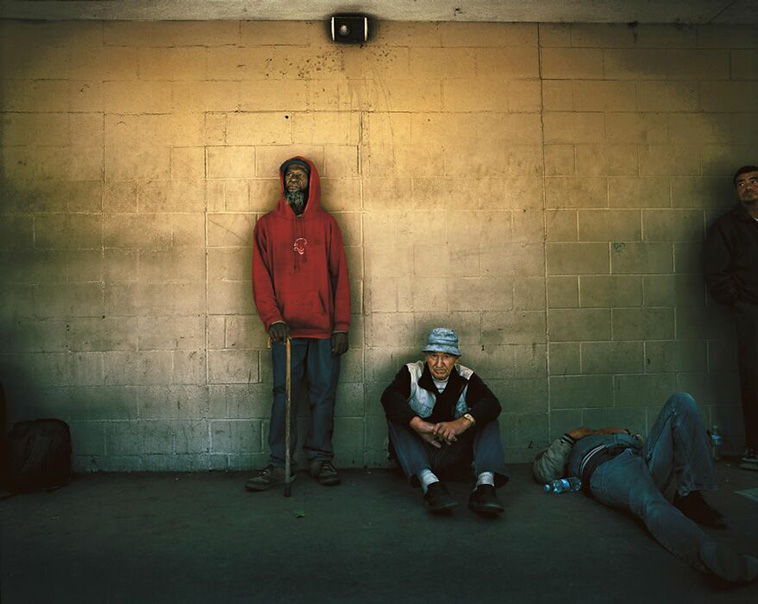 Pop music blares from loud speakers while people are waiting in line for a free meal at the Poverello House: a non-profit organization that has been serving the hungry and homeless since 1973. Billions of dollars cut from the state’s health and social services budget are expected to have drastic effects on fragile groups like the elderly and the disabled, who are increasingly living on the streets and relying on food pantries. “You can go to the Salvation Army; the Catholic Charities… you’ve got a whole rotation. That’s how the seniors in this town get by,” said a 61-year-old veteran who lives in a van next to Poverello. 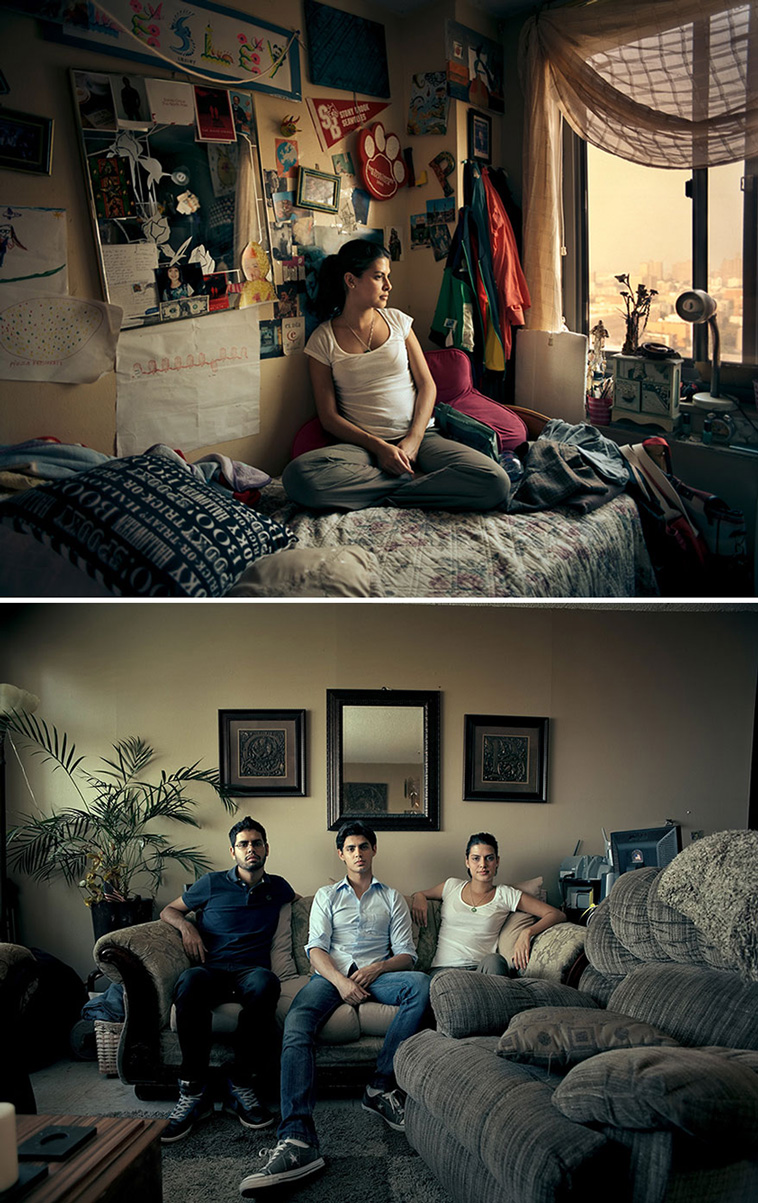 Lesley Perez, a 24-year-old kindergarten teacher, lives in a small two-bedroom apartment with her parents and her three younger brothers in the South Bronx. Though sharing a room with three others is a big adjustment for her after living on her own, she decided to move back into her childhood home to pay off her $32,000 college loan and $12,000 credit card debt she racked up on books, food, and transportation while in school. No stranger to hard work, she holds three jobs to climb out of debt and contribute to the family household. Perez, who is Puerto Rican, says employers are always surprised to learn she is from the South Bronx. She says her old friends from the neighborhood all either have children, have joined gangs, or sell drugs. “When I see them or I bump into them, they consider me as a white individual. And it’s not because of race. It’s because of education and class.” Though she comes from a humble background, her parents instilled in her that education is the way out of poverty. “To continue learning, that’s the only escape.” She just finished her first year of graduate school and hopes to land a job as a teacher, which offers benefits. No one in her family, except for her father, has health coverage.

Andrew, Charles, and Lesley Perez share a bedroom with another brother in their parents’ small two-bedroom home in the South Bronx.