21. Highly Commended, Other Animals: “We Are Hanging On The Web” By Csaba Daróczi 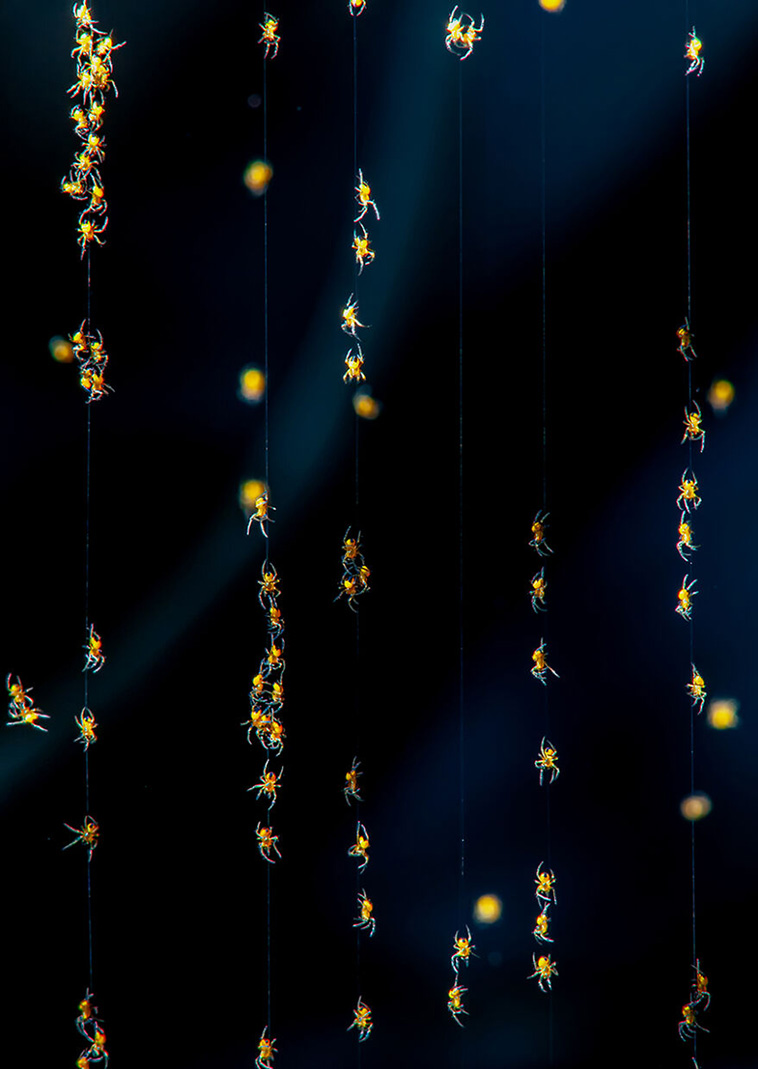 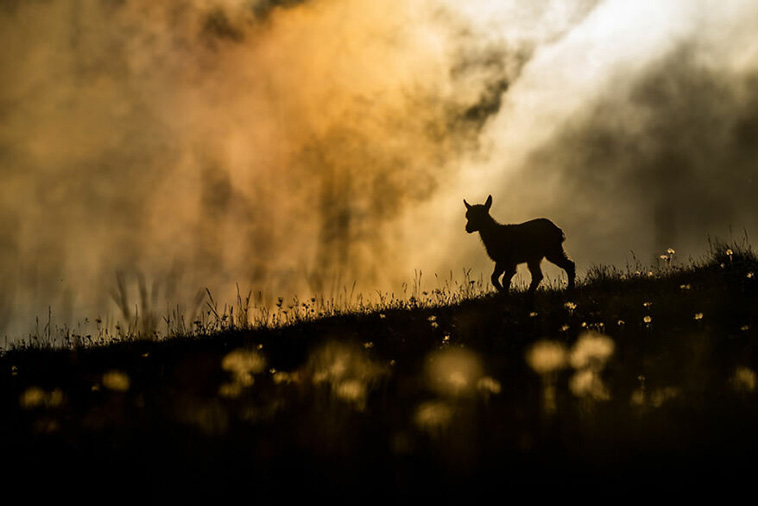 “A young Alpine Ibex strolls dreamily across an alpine meadow. The flowers in the foreground and the sun breaking through the clouds in the background give this image something unique. It shows the beauty of our nature and the carefree life that this young Ibex is living during the warm summer months. I’ve been following the Alpine Ibex several times into his beautiful habitat in the Swiss Mountains and I almost always get rewarded with fantastic encounters with these massive animals. As usual I spent the night in a mountain bivouac to photograph in the morning and evening hours. The situation this evening was just perfect. I was already happy with the nice flowers, when suddenly the sun broke through the clouds and a beautiful backlight situation was created.” 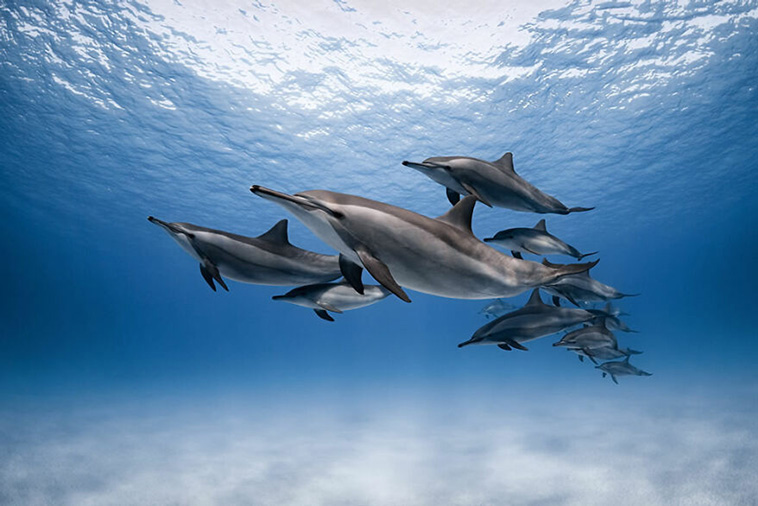 “Sataya Reef (or: Dolphins’ home) in the Red Sea – is one of the best places in the world to swim with wild dolphins. I spent all day with them in the water, and that was for sure one of the best days in my life. You can create thousands of frames at the time of a great encounter. You can shoot an animal from one side, on the other side, on each side. Sometimes you’re so thrilled and hold your finger on a trigger while your camera bursts like a machine gun that makes 20 frames per second. But you always feel that exact moment when you make a very special shot, the one you dreamed of. When everything comes together: the animal’s mood, the light, the color, the depth and all the rest. And a bit of nature’s magic maybe. So, this is the one!”

24. Highly Commended, Plants And Fungi: “Inside A Sequoia” By Uge Fuertes 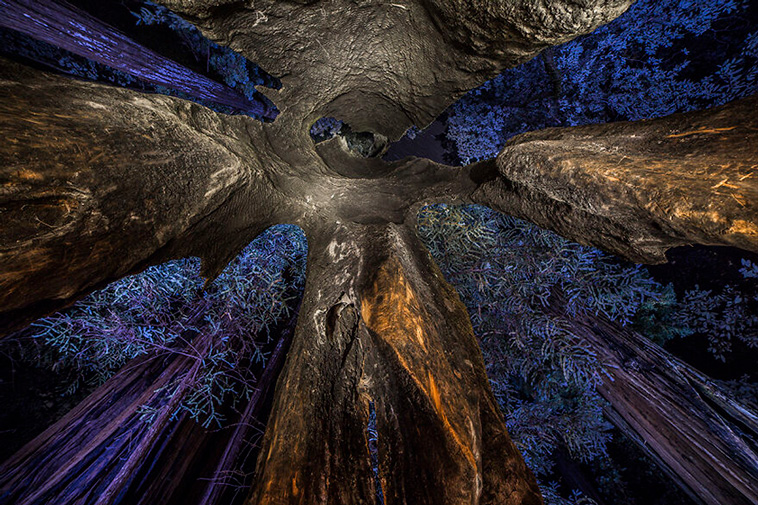 “The photo was taken at Big Basin Redwoods State Park, in Santa Cruz County, California (USA). This park is the oldest in California, protected since 1902. It is a Sequoia sempervirens forest, with trees that are around 100 meters high and 2000 years old. We were amazed to see it. The tree in the photo is a dry tree attached to the ground by four claws. Numerous fires burned it inside, leaving everything inside it hollow. I visited the place during the day to check the shot from the bottom up. At night we returned to the place, and opiliones and coyotes entertained and scared us while I took the images. The exposure of this photo is difficult. The part closest to the camera lights up very quickly but the farthest part (up to 60-80 meters high) stays dark. The use of two color temperatures in the lighting was decisive for the final result. To be able to frame and illuminate correctly, I took 70 pictures. Only one was perfect. My wife Marta helped me to illuminate the outside of the large trees. It is a very big stage, bigger than it might seem.” 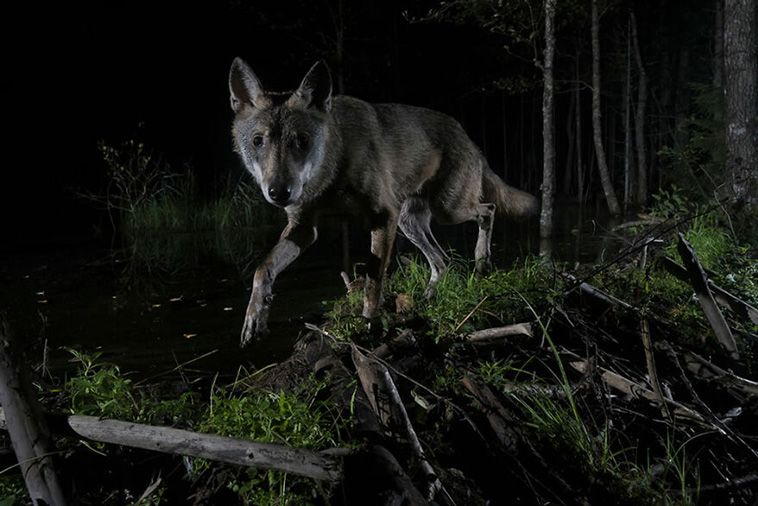 “I love nature photos of different species showing their living style in their natural habitat and natural conditions. To see and show it to others, it often needs pretty close wide angle shots. As photography is all about light, light is a key factor for those shots as well. Also technically, as most of the predator’s activity is taking part in dark or totally dark conditions. It is pretty difficult to make such photos, especially of the species who are not very common and are very careful, like the wolves. In Estonia (Europe) there are around 200-300 wolves. Around 100-130 of them are hunted annually.

In my surroundings, the wolf (Canis lupus) is the most intelligent animal, with extremely well developed senses. They also learned to read and understand human activities and who always has situations under his control. All that makes photographing them a great challenge. I am the happy one, I have seen them.

As I have been looking around for a few years in that area, I knew that the year before, the wolf’s litter was nearby. I started to look for possible bottlenecks on their routes and discovered this small ditch with several beaver dams and a beaver lodge. The beaver is also on the wolf’s menu… I took the chance and installed a camera trap with flashes on the beaverdam.

In about 6-7 months, I got lucky, by getting this picture. Actually this young wolf photographed herself, letting me have a recording. The photo is taken in the eastern part of the Estonian forest area in September around 4am. This photo shows well how relaxed the wolf is, even while jogging on the beaver’s dam in absolute darkness. She probably did not find any beaver around, so she returned the same way back in about 7-8 minutes.

Using a camera trap – you are principally trying to create in your mind all the possible situations, variations and making the compromise to find a suitable site. Choosing focus point, lighting options, settings etcetera in manual mode and hoping something similar to happen. The forest is gracious…”

26. Highly Commended, Human And Nature: “The Hand That Feeds” By Andrew Upton 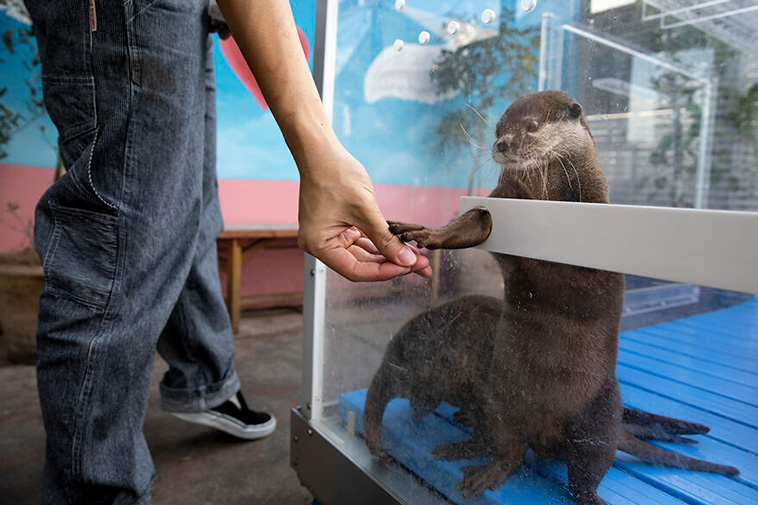 “Down a busy side street in Harajuku, Tokyo, you will find Japan’s most popular otter cafe. Here, three Asian small-clawed otters (Aonyx cinereus) are kept on display in a small glass tank. In this image a staff member feeds one of the otters a snack of dry pet food. These snacks are high in salt content, and unsuited for this species whose natural diet consists of invertebrates like crabs or shellfish, supplemented by fish. According to the IUCN guidelines for the husbandry of Asian small-clawed otters in captivity, the otter’s feed times should be varied as it helps prevent the development of begging or other stereotypic behavior. Hiding food around the enclosure as scatter feeding is also recommended as it promotes the otter’s natural foraging instincts. The limited space and high concentration of otters at Japan’s otter cafés makes adequate enrichment difficult, and the constant feeding and pampering by guests and staff members has made these otters dependent on human interaction.

I did not feed or handle the animals and I spent a long time habituating them to my presence. Once the otters no longer paid attention to me I was able to become a fly on the wall, documenting the reality of life in this cafe. It was important to me that I let the otters tell their story in their own time and that my presence did not induce them to “perform” for the camera. Asian small-clawed otters are listed as Vulnerable on the IUCN Red List.” 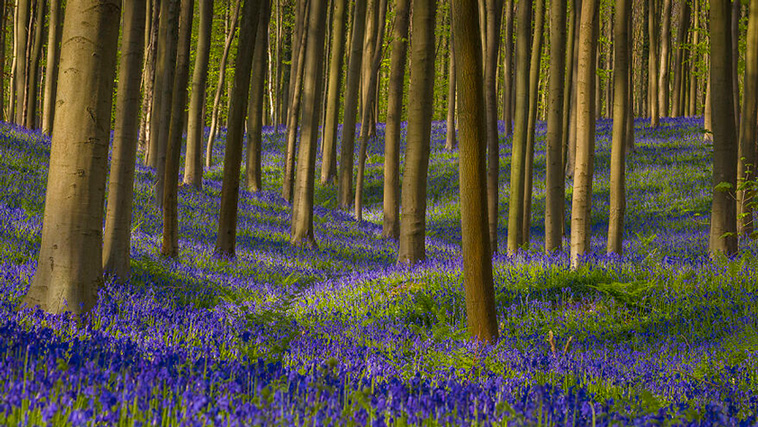 “The Bluebells in the Hallerbos in Belgium are my favorite to capture in springtime. Very early on a morning in April, well it is more like night, I drive from the Netherlands to Belgium and walk into the forest before sunrise. It is still very quiet and the first birds are already singing. When the sun rises, all the flowers of the Bluebells and the first green leaves of the beech trees will become magical. That is a moment I love very much, every single year!”

28. Runner-Up, Black And White: “Yin And Yang” By Gheorghe Popa 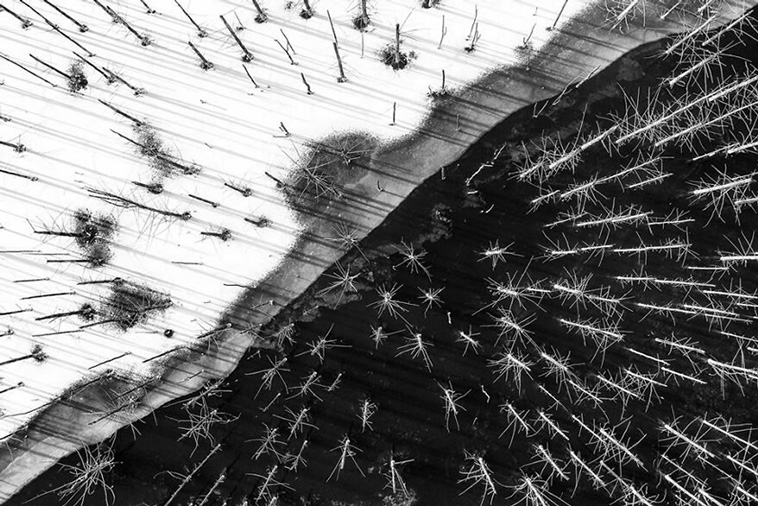 “This is a photo I took in the middle of the day and this is an aerial view of Cuejdel lake in winter before the complete frost of the water. Cuejdel is the largest natural dam in Romania, which is the explanation for these trees. 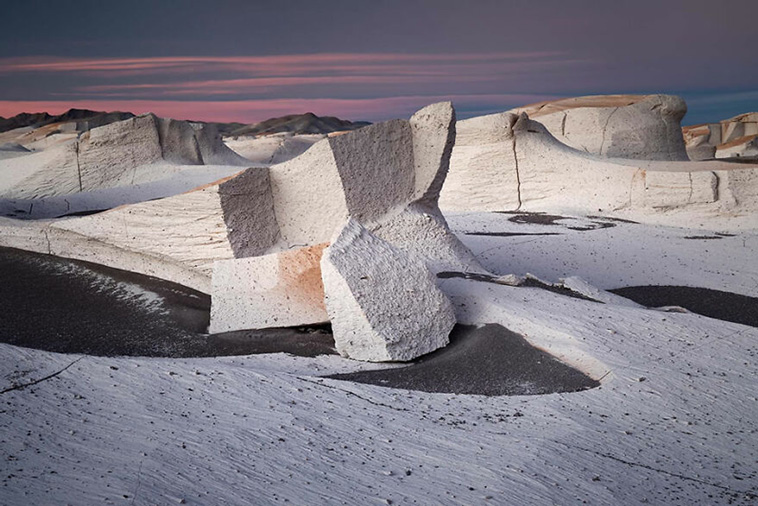 “The Puna is a high desert plateau, where some of the most surreal desert scenery of the planet is found. Here’s the “Campo de Piedra Poméz”, a massive white pumice stone labyrinth, result of a volcanic explosion that spread ashes and debris that were immediately crystallized. Many years of erosion have carved these porous rocks into surreal formations surrounded by an ocean of black sand. That morning I got lost in a labyrinth of forms captured by a whirlwind of inspiration. In these places I found artists and writers of the past hidden in every detail… It was a dreamlike morning that I will never forget. The shape of these wind-sculpted stones reminded me of the prow of a ship.” 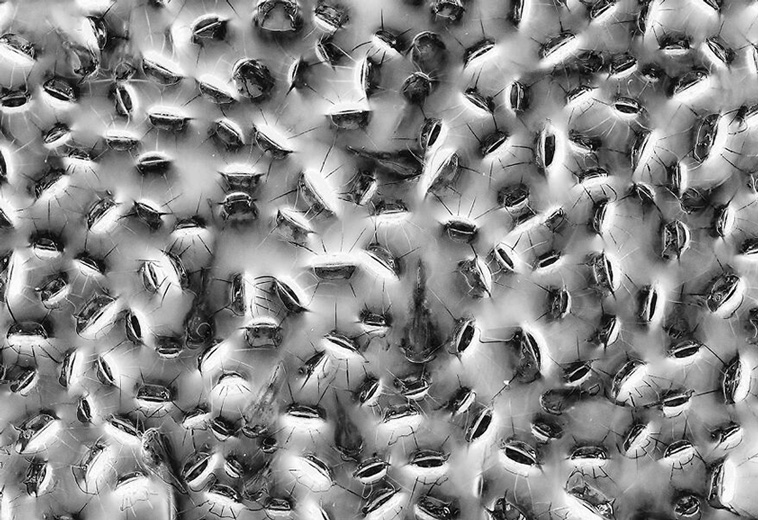 “At the end of the summer, I photographed birds in a lake. I went into the hide in the dark, and at 8:00 I’m usually finished taking pictures. When I was on my way home, I heard strange noises near a sluice. When I got closer I saw these brown bullhead. Because of the heat, the water ran out of oxygen, so these fish tried to survive it.”