Here are 30 winning photos of the 2021 nature photographer of the year awards.

Here is more about nature photography. 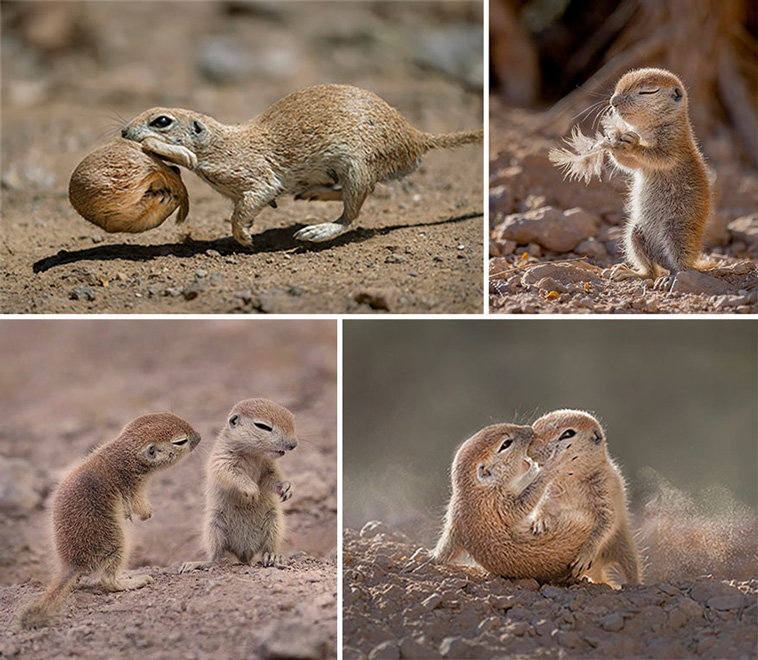 “Emotional Range: A Photographic Portfolio of a Round Tailed Ground Squirrel Family

Several years back, when moved out to the base of the Superstition Mountains in Arizona, I noticed a round-tailed ground squirrel family.

I decided to photograph them, hoping to show that these animals think, feel and have emotions too. Often people think that dogs and cats are the only animals that have feelings. Could it be that people think this because observation is easier with a pet? 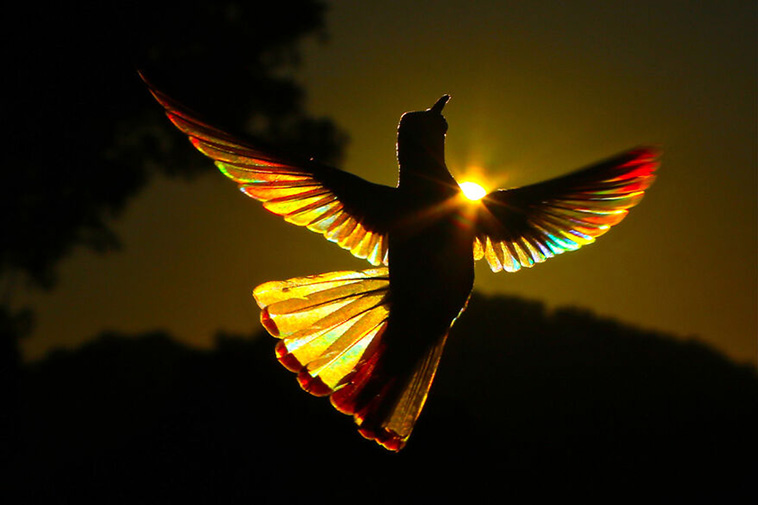 “The photo SUNDANCE is part of a collection or series called WINGED PRISMS.

A Black Jacobin hummingbird hovers in front of the sun in the Atlantic rainforest in Brazil. As the sunlight penetrates the wings it creates a prism effect filling the feathers with rainbows.

This is a natural effect and contains no digital manipulation and cannot be seen with our eyes.

I discovered this natural phenomenon in 2011 while I was making a film THE DANCE OF TIME.

The film opens with the scene of the hummingbirds in front of the sun in slow motion,

revealing the secret of the rainbows. The film went on to win 11 awards.

While trying to make a photo for the DVD cover I took most of the photos with the same effect, which went on to become the series WINGED PRISMS.” 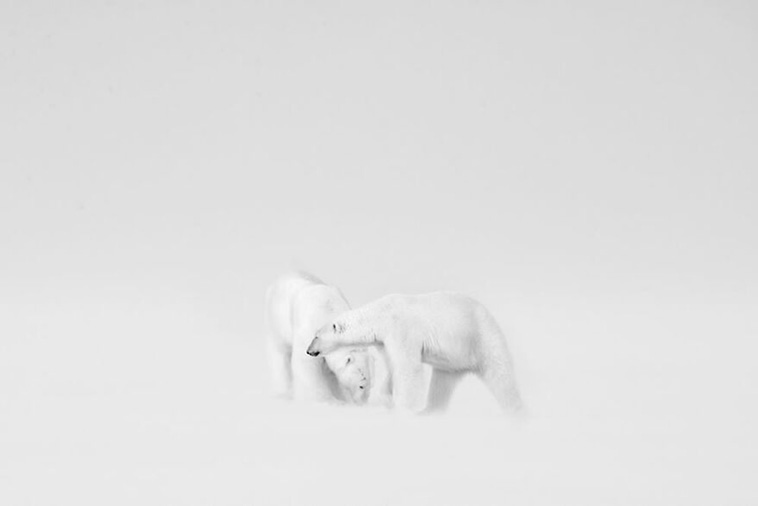 “Polar bears in courtship, during a whiteout in Svalbard. The wind was so strong and the snow was blown so strongly, I almost couldn’t keep my camera steady to frame the bears. We were lost in this whiteout for hours, with no point of reference around us. The white polar bears in the white surrounding blended perfectly and I thought about the song by Billy Idol “White Wedding” as the white surrounded me.” 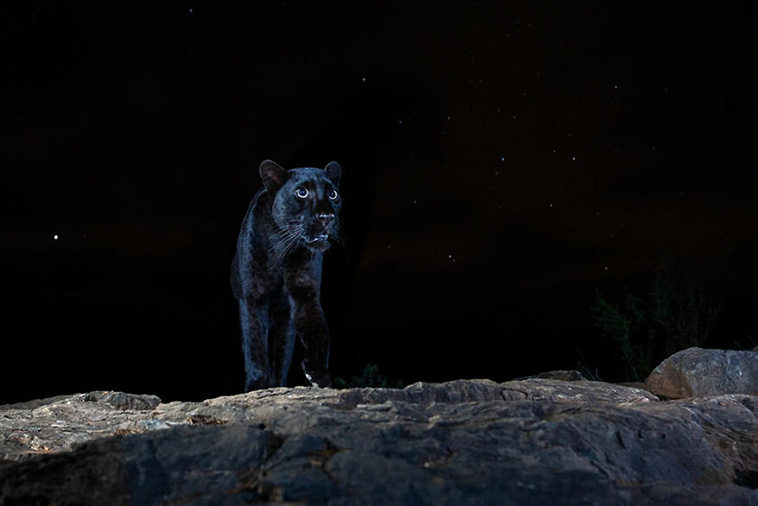 “Black panthers have fascinated me since childhood and it had always been my dream to photograph one in Africa – but they are so rare and elusive that I never expected to achieve it. Then I heard about a melanistic leopard that had been seen in Kenya’s Laikipia County and I knew this could be the once-in-a-lifetime opportunity I had been waiting for. In early 2019, I spoke to the people who had seen the leopard and with their help I selected locations for my camera traps. For me, the ultimate photo would show the black leopard under the stars in a single exposure. It took several months of perseverance and many near misses before I achieved this image. For the image to work, many elements needed to come together. Firstly, it had to be a cloudless night which wasn’t common at this time of year. The only way to expose the dim stars was to use a long exposure time and therefore there could be no moon which would otherwise cause ghosting. And of course, the leopard himself had to appear.” 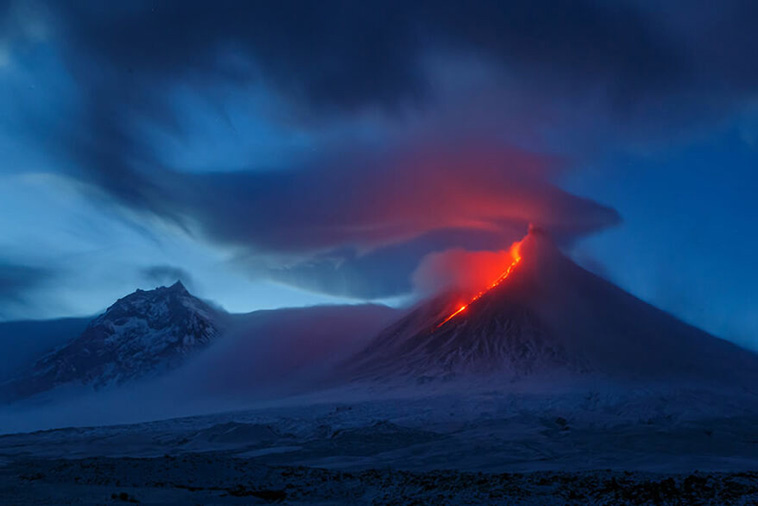 “The photo shows the eruption of the highest and most active volcano in the natural park Kamchatka “Klyuchevskoy”. The park is near the seismic station “Apakhonchich”. The lenticular cloud above the top of the volcano, illuminated by hot lava, creates the impression that a fire-breathing dragon is sitting on the top under the clouds.

For 10 years now I have been photographing the eruptions of this volcano and for the first time I have filmed it from this angle. This place is amazing because here you can see 3 volcanoes standing side by side like the great pyramids of Giza. On the right is the highest volcano “Klyuchevskoy” (height 4750 meters). In the middle is the volcano “Kamen” (height 4585 meters) and on the left is the volcano “Bezymyanny” (height 2882 meters). Unfortunately on this day it was covered with clouds.

When we went to the shooting, I already knew exactly which picture I would like to take. I had to catch the right moment in the twilight. When it is too light, the volcano is clearly visible, but the incandescent lava is not visible, and vice versa, when it is too dark, the outlines of the volcano were not visible, but the lava was clearly visible. Therefore, the main task was to capture the moment when the volcano was still visible, and lava was already glowing on its slope. Therefore, I used the continuous shooting of about 100 frames and it turned out to be the very frame that I wanted!!!” 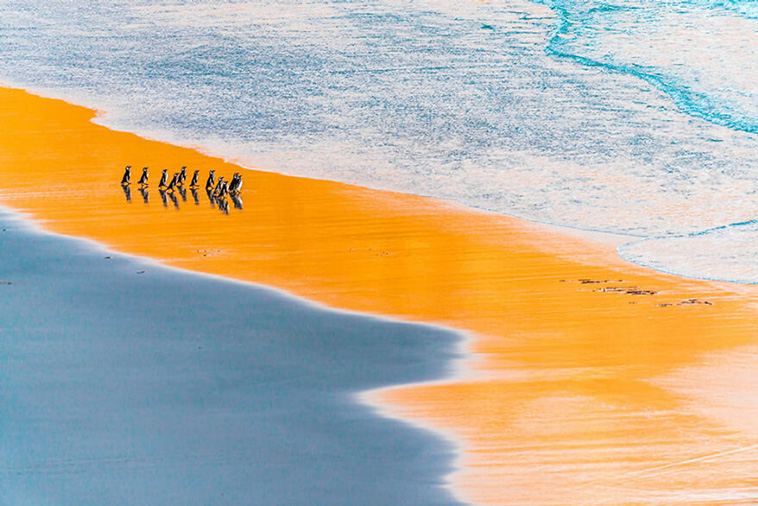 “A group of Magellanic penguins (Spheniscus magellanicus) head out to sea in the early morning, just as the sun rises over the horizon. They will spend the whole day fishing and eating in the sea. When they return they will have to feed their hungry young, that will wait for them on the beach.

The image was taken in The Nec – Saunders Islands – Islas Malvinas, where for five days I was isolated with a small group of photographers, only with the company of penguins and oysters, species of birds and mammals.

Since the best light was at sunrise, I stood on a small hill at five in the morning and waited for the penguins to appear in groups as they usually do. The light and the surroundings did the rest.”

7. Winner, Plants And Fungi: “Heat Of Hoar” By Rupert Kogler 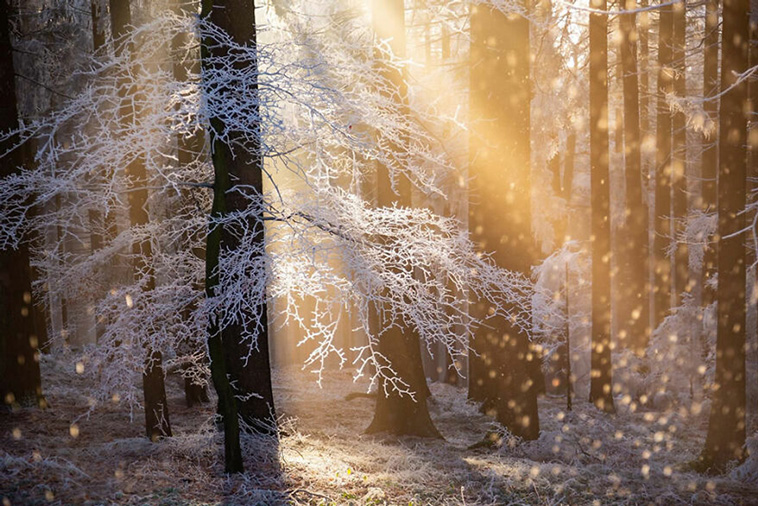 Close to my hometown of Linz, Austria, there’s a hill partially covered with some nice forests. And since in late autumn, there’s quite often heavy fog in Linz, I often go up this hill hoping for some sun above the layer of clouds. Especially the areas where sun and fog merge in the woods, are the ones I’m looking for. Even more when the temperatures are below zero and the fog creates mesmerizing patterns of hoar frost on the branches of the trees. This particular day I was lucky enough to experience these conditions, but not enough of that, the sun was already very low and the light was warm. The most fascinating thing to me actually was, that the sun melted the hoar frost in the tree tops and these particles of ice finally fell down as a glittering curtain from time to time. So I just tried to find an appealing composition hoping for the rays not to disappear and some ice coming down in front of me, backlit by the sun, while I used a wide aperture to enlarge and blur the glittering dots. Again nature’s magic delivered a memorable and enriching moment.

8. Winner, Other Animals: “Walking Along Fennels” By Ruben Perez Novo 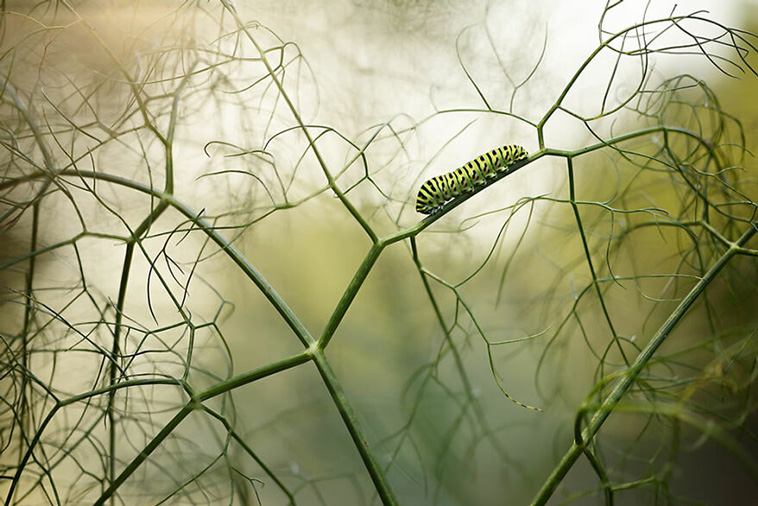 “The machaon butterfly is one of the most beautiful diurnal butterflies in Europe. They have a large wingspan in relation to other butterflies within Europe. Unfortunately, a consequence of its beauty is that the species is very popular with collectors.

The caterpillar of this butterfly, the one that appears in the photo, is also very striking because of its color in green and yellow with black stripes and orange points. These caterpillars are very common to be found among fennels (Foeniculum vulgare) and they love to feed on this plant.

When I found this little machaon caterpillar it was already a little late and the sun was beginning to set. On the horizon were a few trees where the sunlight was shining through, creating a beautiful background between their leaves. To illuminate and give volume to the caterpillar I used a small LED panel and with combining natural and artificial light I created this image. The photo was taken on a hot summer afternoon in mid-August in Ares – Coruña – Spain.” 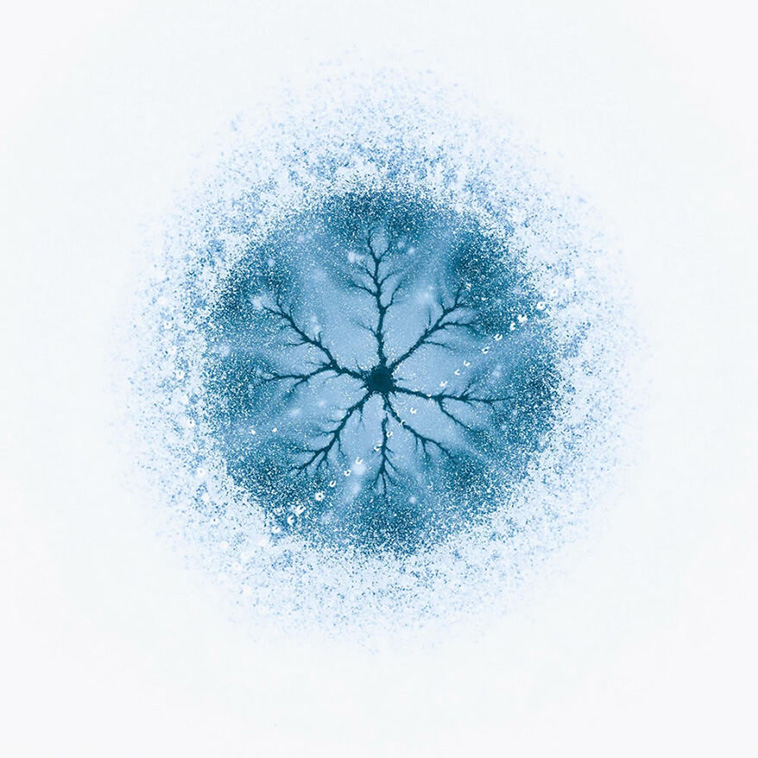 “Ice cell is one of the images from my 2021 Ice Anatomy project photo series. Ice Anatomy is an aerial series of photos of the Cuejdel Lake in Romania during the winter when it is completely frozen. The fresh snow and the ice cracks created these shapes that resemble neurons or just cells. My project Ice Anatomy follows the transformations of the ice on the lake over several winters. This is a subject that I have been pursuing for more than two years and I came up with the idea during winter, when I observed the shapes and cracks appear on the surface of the lake after the process of frosting and defrosting.” 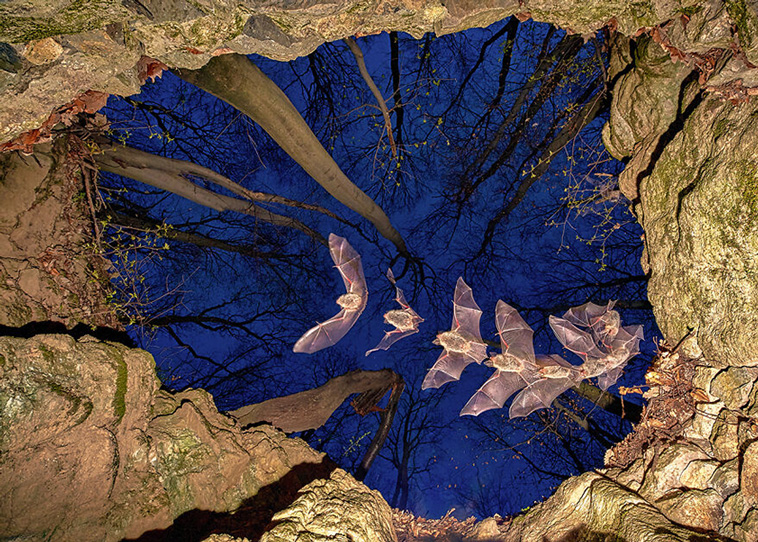 “Near my place of living there is a karst mountain range called Mecsek with numerous sinkholes and caves. During one of my trips in the mountains I came across this small dolina. There and then I could see the photo in my mind’s eye.

I usually take photos in springtime before trees start leafing out. I assemble and set the equipment before sunset, take up position at the mouth of the cave and upon hearing the sound of bats I know they are about to leave their nest to hunt one by one. It is an incredible experience literally feeling the wind stirred by the flapping of their wings as they fly by me. As the bats begin their hunt, I normally wait for about two hours at the scene because later on their level of activity decreases.

Though I remain invisible to them, they can feel my body temperature when they leave the cave. Some bats are more cautious and return to the cave at first. However, when they realise I do not harm them they also fly out. Since they are an endangered species I only disturb their life cycle for two to three days in spring.

I have observed the individuals of two species so far:

The photo was taken from the mouth of a karstic mountain sinkhole. Due to the long exposure time I placed the camera on a beanbag. The exposure was controlled via a wifi network by using a cell phone. I used a flash for the light source which was set in strobe mode with manual flash.”