“During the autumn season, in the very early hours of the morning, thanks to some particular climatic conditions it is possible to witness the formation of the ‘river of clouds’ in this valley. With the high pressure and the absence of wind, thick layers of fog thicken due to the humidification of the air mass present near the ground and flow along the Adda river, thus giving rise to a muffled landscape. In this period (October-November) the sun rises just behind a dense group of trees: therefore, if the sky is clear, for a few minutes it is possible to observe the formation of these intense rays of light. The photo is taken from a sanctuary, located on a hill overlooking the whole valley.” 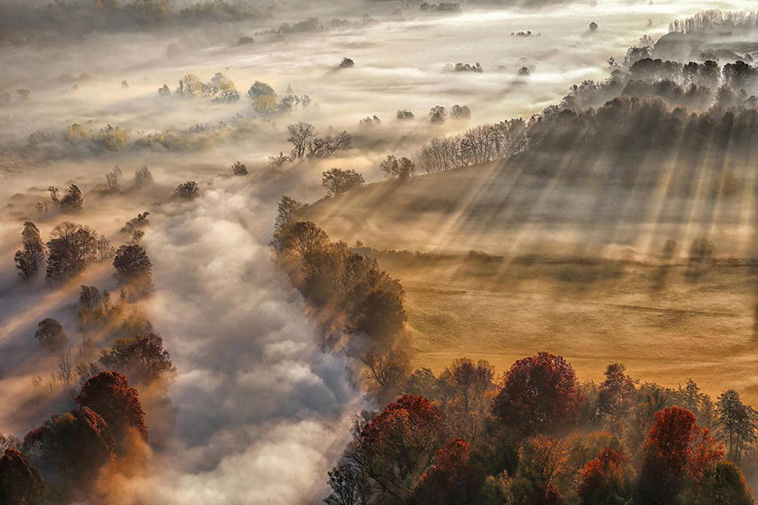 “This was one of the top two largest haboobs (dust storms) ever recorded in the state of Arizona. At the point of this photo, it was fully mature, towering over a mile high with winds in excess of 80 miles per hour. The sun was setting, giving the dust wall its deep pink hue. It was a truly incredible sight to see!” 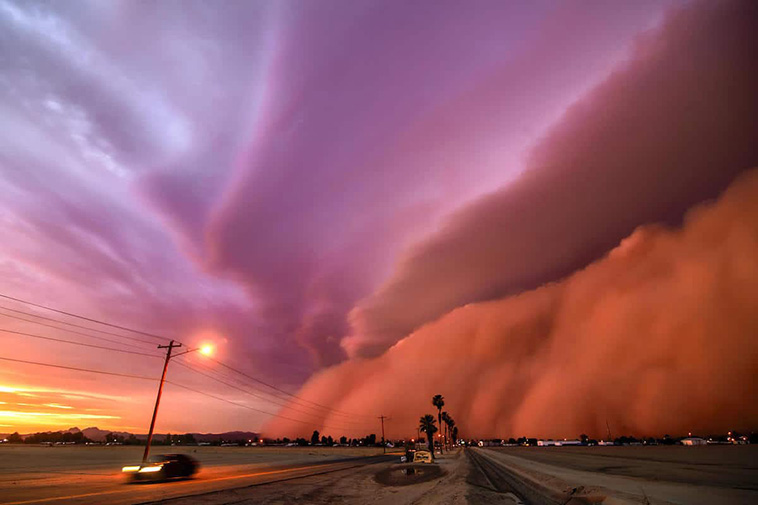 “I live in Arizona but was visiting family members in El Paso, Texas that week. Very early on the morning of November 6th I woke up and felt an urge to check my radar app on my phone. I discovered a discrete thunderstorm cell was moving north from Mexico towards the U.S. border near downtown El Paso. I hurriedly gathered my camera gear and drove to an overlook that gave me a perfect vista of the storm and of the downtown El Paso skyline. It’s always been a “dream shot” of mine to capture lightning over this desert city landscape. Thankfully the storm held together as it made its trek north across the border between Ciudad Juarez, Mexico, and El Paso, Texas. My dream shot came true as I captured this and several bolts before leaving shortly after this image was taken due to the lightning getting too close for comfort!” 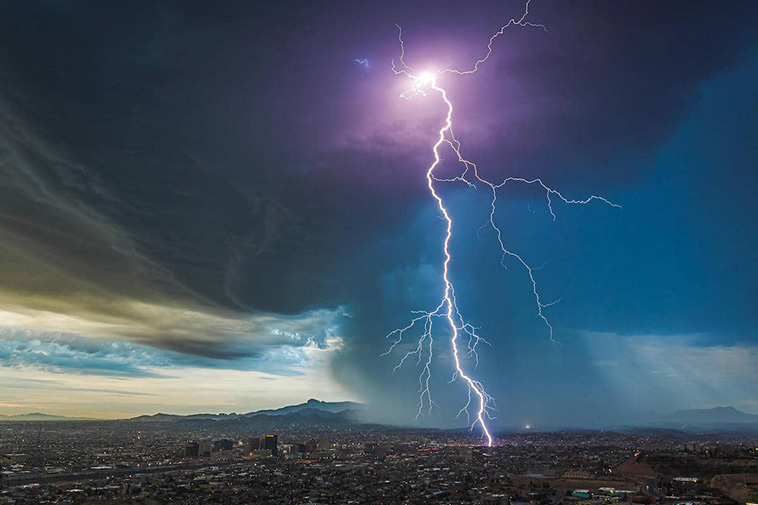 “Lunar halo over the night forest lake, Mogilev, Belarus. I suddenly saw an unusual lunar halo in the night sky and hurried into the forest to take a picture of it. It was an amazing sight when in the night sky, the halo was like the eye of God. I’ve never seen this form of halo before. It was freezing weather and I couldn’t stay in the forest for a long time, but I really wanted to take a picture of this image.” 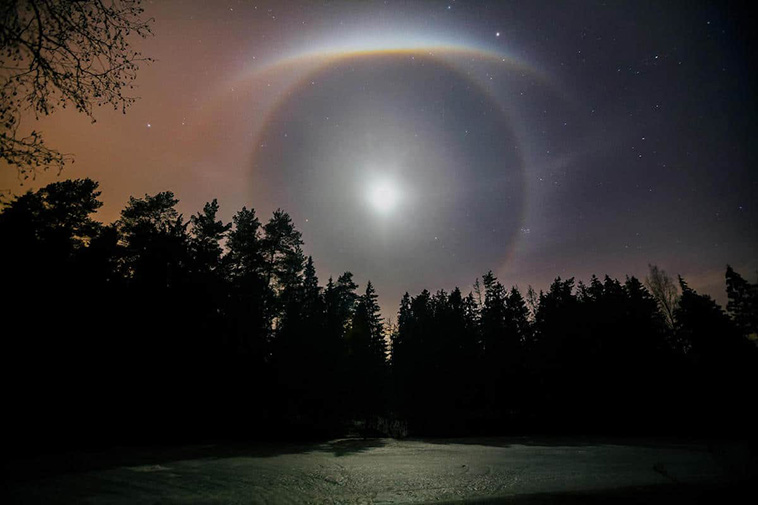 “In winter the water level drops and cultivable lands get dry causing serious drought. In some areas, farmers can’t even use water pumps to irrigate their lands. During the drought season, people usually take fields as shortcuts to go from one village to another. I have tried to capture the scene in photos using my drone.” 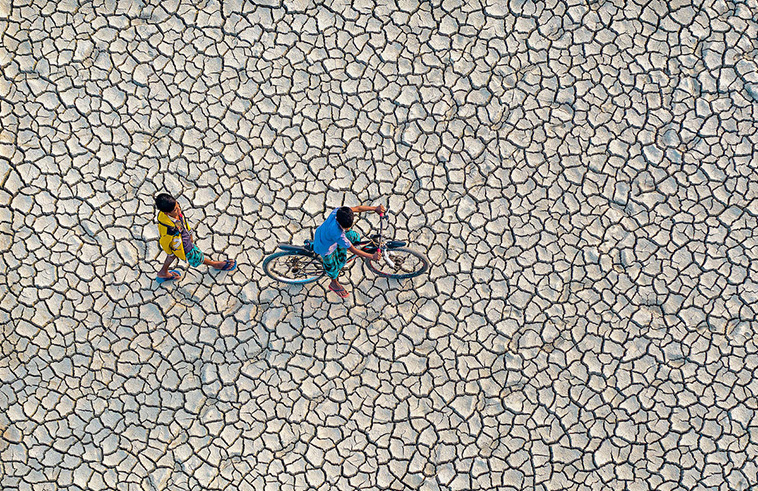 “Just Walking in the Rain” by Adrian Campfield. Finalist

“My wife and I were standing on the platform waiting for the train at Waterloo Station in London, England. We had been walking around London for the day taking photos and were on the way home. Without any warning, the heavens opened and the storm broke thunder and lightning everywhere. We both ran for cover under the platform shelter as did all the other waiting passengers. I saw this lone woman walking towards me with the umbrella up and I had enough time to get the camera ready. I zoomed in a little, set the speed at 1000/iso to freeze the falling raindrops and this was the result.” 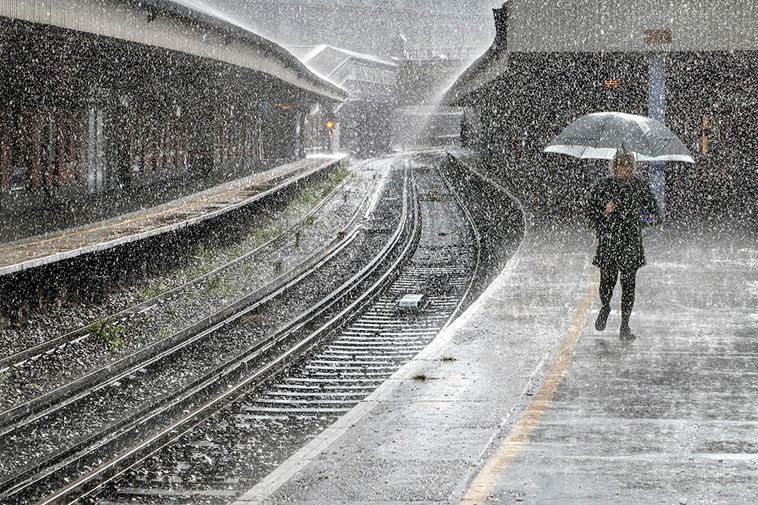 “After a foggy and snowy climb up onto Meall Nan Tarmachan (Hill of the ptarmigans), and along the Tarmachan Ridge, I was greeted, as I ate my lunch on Meall Garbh, to a break in the weather. The sun broke through and behind me a full fog bow, t, and glory. At one point there were multiple glories too.” 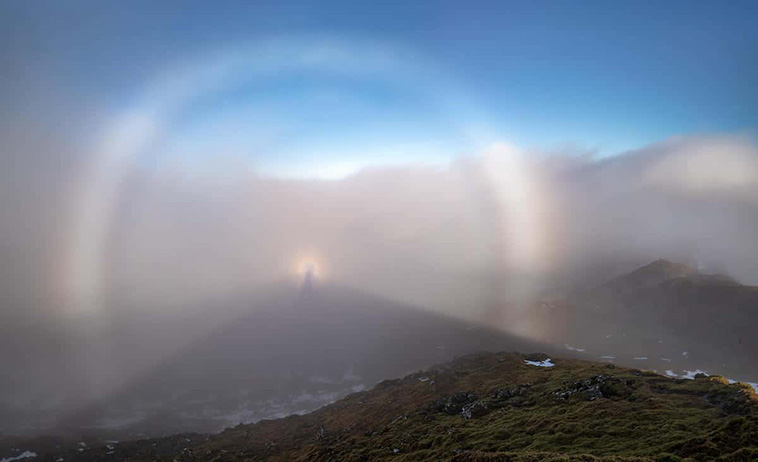 “An hour before taking this photograph I was walking along the trails that surround the beautiful rock formation known as El Chaltén in Argentina, the day was very cloudy, apparently luck was not with me on this adventure. The climate in Patagonia is somewhat unpredictable, it changes every moment and the wind is so strong that it quickly moves the clouds. Only at times could the figure of the massif be distinguished. My hope was focused on getting to a place from where I could wait very patiently for the weather to help me and give me a window of good weather at sunset to be able to take some photos, but nature surprised me… It was incredible! Only for a moment, the clouds allowed me to see El Chaltén and to my surprise, there was a spectacular and brilliant lenticular cloud with a beautiful and perfect figure that I had never seen. It was a unique and unrepeatable gift that sometimes reminds me of how lucky I am to be a photographer and to be able to visit different places to show the world these natural and climatic beauties.” 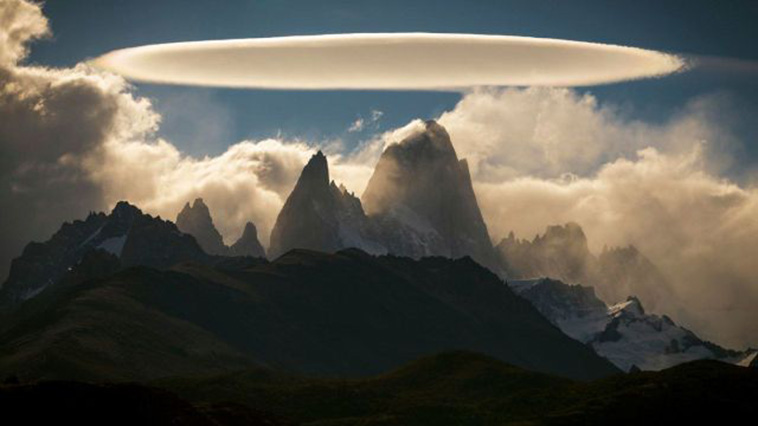