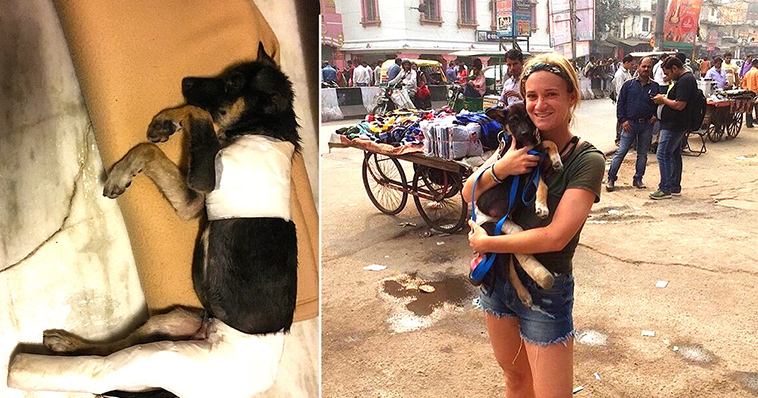 She was trying to get over a breakup and found her new best friend miles away from home.

After breaking up with her former flame, a lady from Pennsylvania decided to go on a trip to rediscover herself- she ended up finding more than that.

“I went out in search of independence”, said Jessica Haltzman. “I decided to travel after my AmeriCorps service year.”

Haltzman learned about Sadhana Forest, an India-based tree conservation organization and decided to pay the place a visit.

While on this journey, Haltzman lodged at a hostel in New Delhi one day when she heard crying. She rushed outside to see who needed help, but instead found a little puppy lying on the street in front of the hostel.

“I knew at that moment that I had to save him” 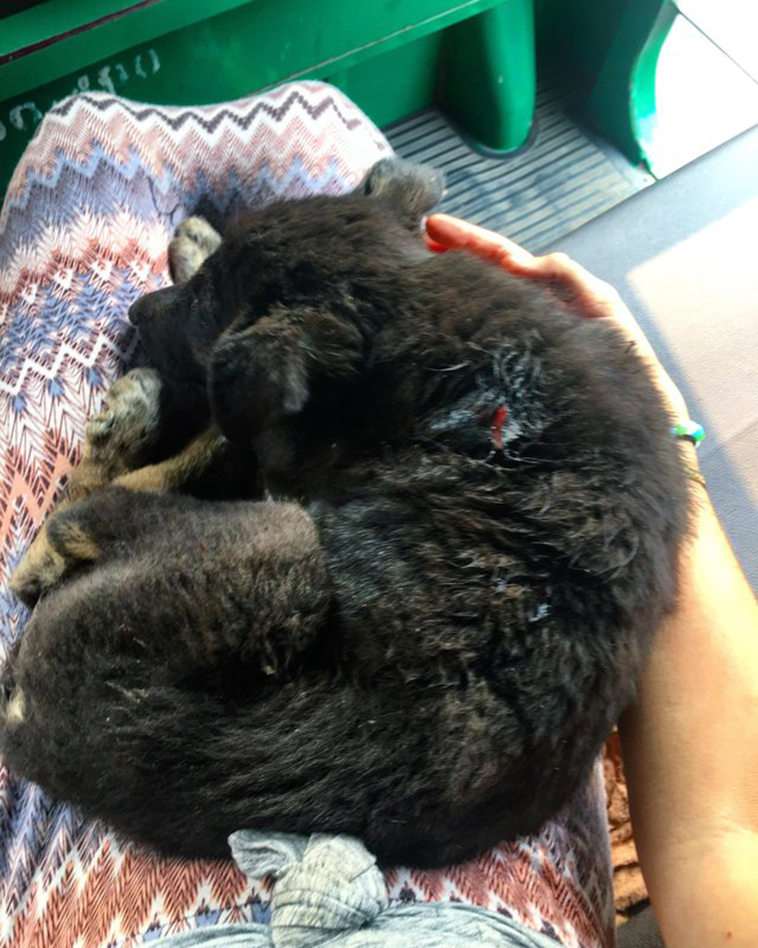 She immediately picked him up and saw that he was in pains. “I ran frantically around the streets in search of a vet. Finally, I found one and took him in there.”

The puppy had two broken hips and an infected wound. While the vet took care of him, Haltzman found a pet shop where she bought all she needed to take care of the puppy. 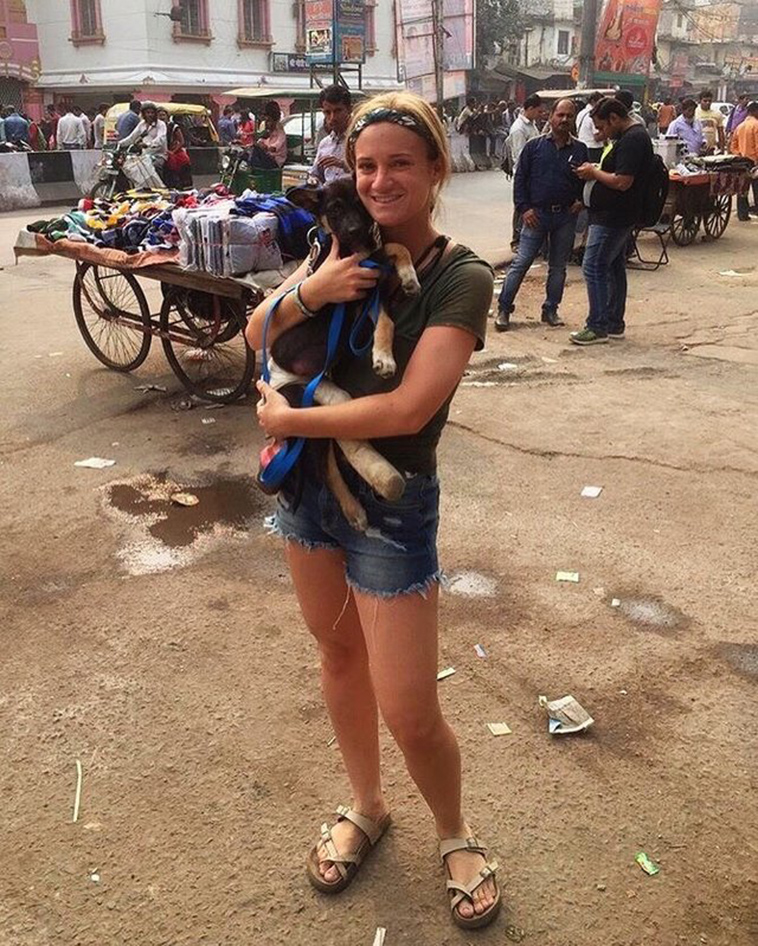 “I was under a lot of anxiety”, said Haltzman. She still had to travel, and now she had to do so with an injured puppy in tow. “How do I explore South-East Asia with a puppy?” 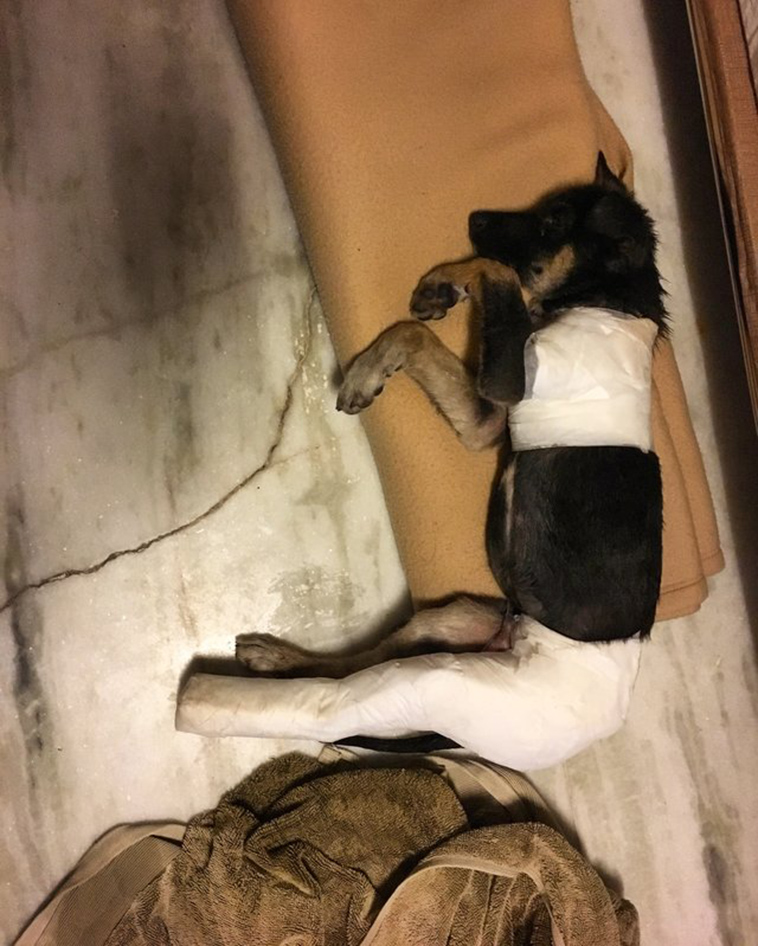 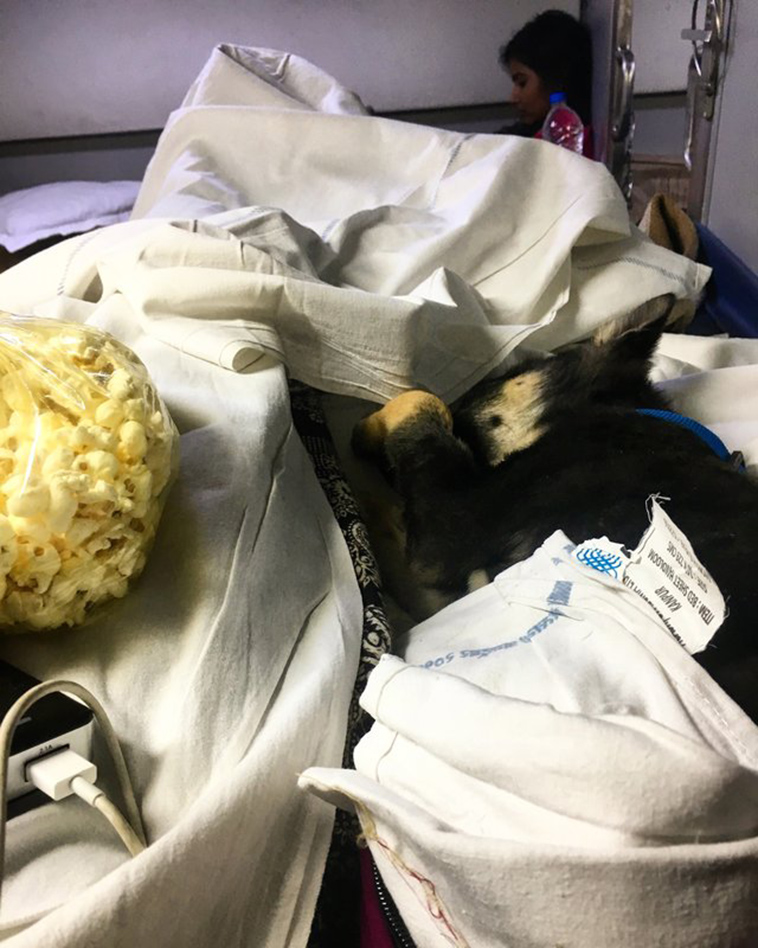 Haltzman changed her plans. She canceled her flight to Nepal and booked a bus ticket so the puppy could travel with her. She got the puppy the shots he needed for safe travel. She christened him Delhi, after the place she found him. “I was anxious and couldn’t sleep. I didn’t want to let this dog down” she said.

Haltzman continued to travel with Delhi. They took a train ride to Varanasi and the next day they boarded a bus to Kathmandu, Nepal. The entire ride took 24 hours. “Delhi was perfect and he slept like an angel throughout the trip”, she said. 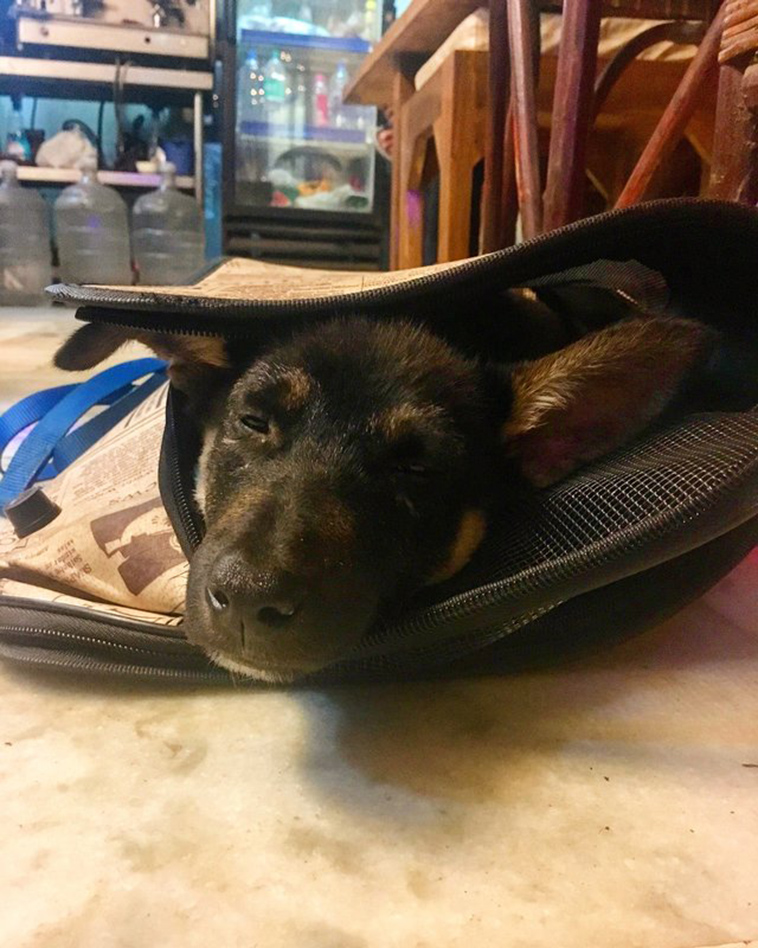 It was obvious that Haltzman and Delhi were similar spirits- they were both adventurous friendly, and loved to see new places.

“Everyone he’s met seems to love him he has so many friends now”, Haltzman said. 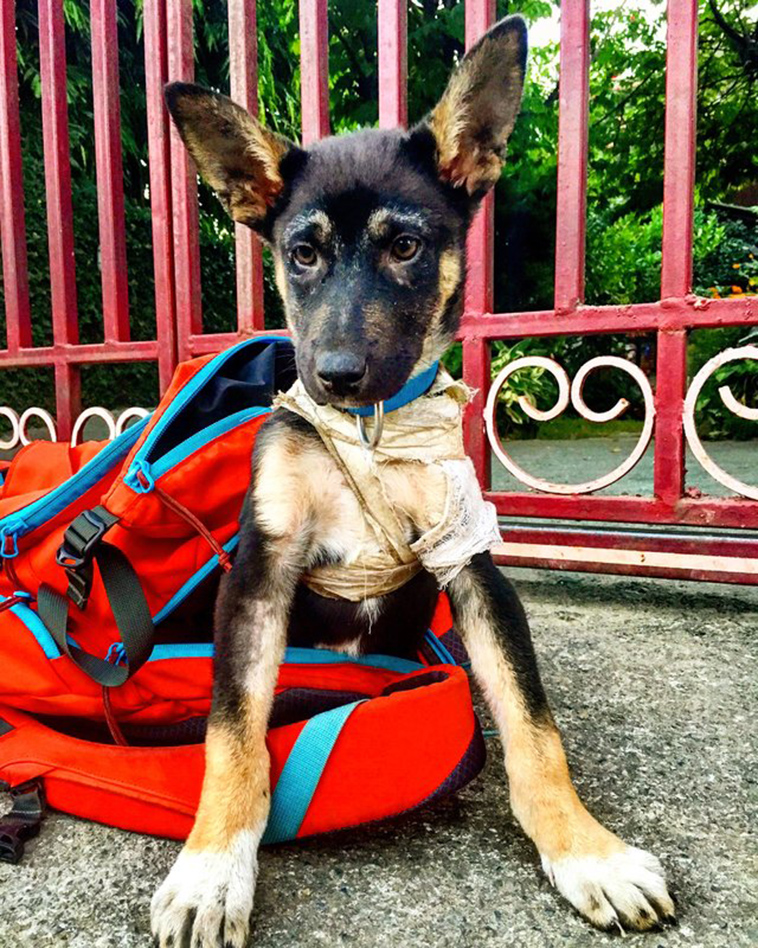 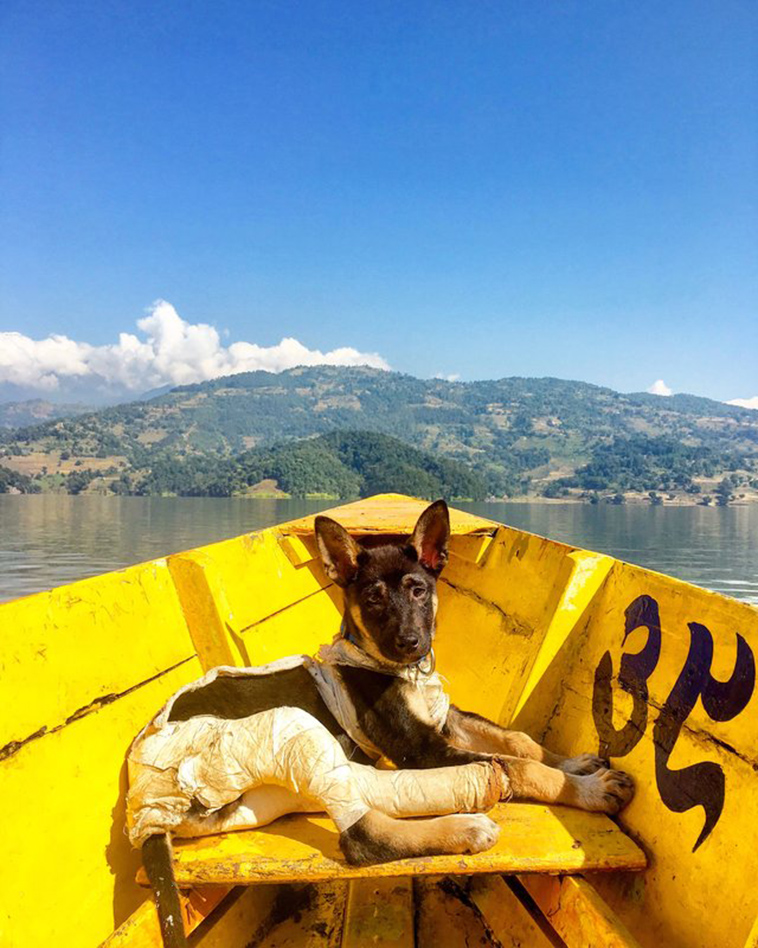 As adventurous as Delhi is, he still has to rest a lot and recover.  Soon, Haltzman and Delhi will travel to Thailand and they’ll separate for quite a while.

“Luckily, my mom will meet me in Thailand. She’ll take Delhi back to the U.S while I continue to travel till February and shell watch him till I get back. I’m sure she’ll spoil him”, Haltzman said.

When Haltzman gets back home, she’ll be off to another adventure- with Delhi! She and her dog will move to Seattle, Washington. “I love to hike, and Delhi will be my adventure pop. We’ll hike a lot in Washington and all over the U.S. I hope to also take him overseas again”

Haltzman wants to raise awareness for stray dogs everywhere. “I want to start my own shelter. I believe we were meant to find each other” 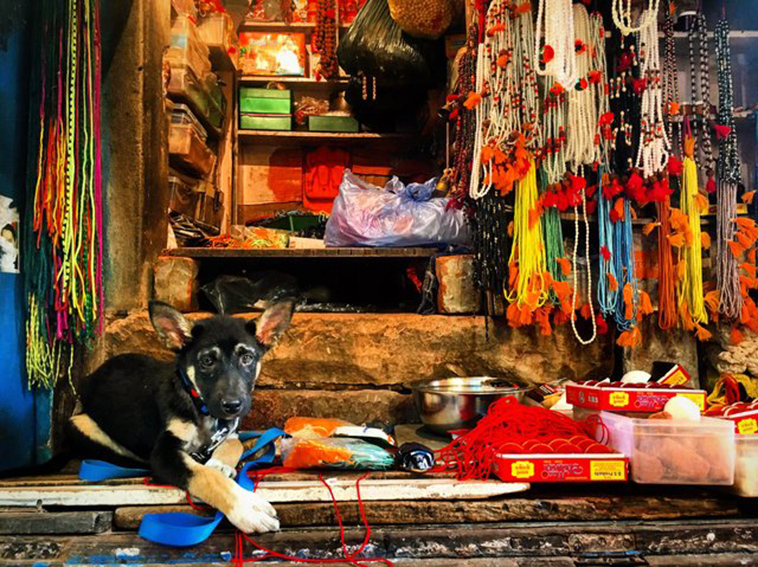