Nature can be so beautiful — yet so cruel.

As you know well, the natural world is filled with a seemingly endless supply of oddities.

Weird fish and bizarre reptiles coexist with strange parasites and giant bugs, living out their lives in bizarre ecosystems. 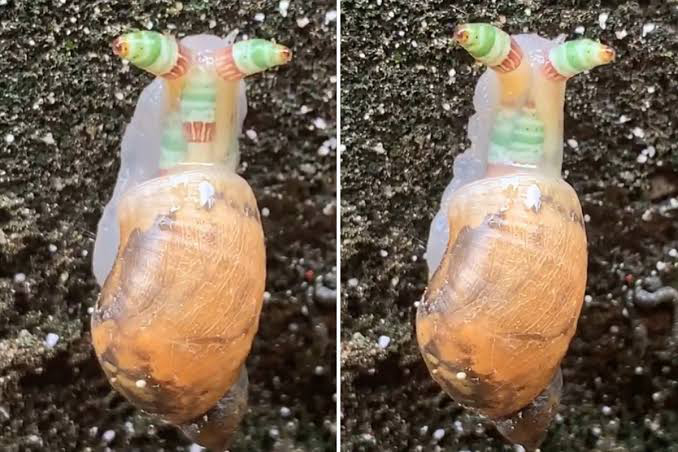 Biologist Mike Inouye shared a horrific video of the aftermath of a snail being invaded by a parasitic worm called a Leucochloridium. The footage shows how a worm makes the snail’s eyestalks appear like caterpillars in a freaky process that scientists call aggressive mimicry. After controlling the snail’s brain, the worm lures it into the open, where birds are fooled into pecking its eyes out. The worm then breeds inside an unsuspecting bird’s stomach and eggs are laid in the bird’s feces. And guess who ends up eating the eggs? You’re right, the snails. And the cycle restarts anew.

Watch the video below:

This zombie snail. A parasitic worm Leucochloridium has taken over its motor functions and eyestalks, making them into caterpillar mimics so birds will eat them. The worm can then reproduce in the bird’s GI tract, eventually transmitting via its faeces.

“Today I found a “possessed snail” at work. A parasitic worm (Leucochloridium) that when eaten by the snail, infests it’s eye stalks and “mind controls” it. The bulging eyes attract birds into eating it so it can lay eggs in the bird’s gut and release them through faeces for more snails to eat.”