It all started in 2006 when Mantoani rented a 20×24 Polaroid camera (itself an extraordinary rarity), which weighs 235 pounds (106kg) and has its own custom wheeled tripod. “The cameras are very unique and render an image of 20×24 images once the film is ‘peeled apart,’” Mantoani told Bored Panda. “Since renting the camera was expensive, I wanted to shoot something that was important to myself and I called a couple of photographers that I knew, legendary music shooter, Jim Marshall and sports shooter, Michael Zagaris.“

“The process for both myself and subjects was special and I knew I was onto something, as the viewer could appreciate both the photograph and photographer in a single image,” he told Bored Panda. “I also had each of them write about their photograph on the bottom of the print.  From there, I began to approach other photographers, shooting from California to Boston, and over a period of five years recorded over 150 photographers on this format.“

Steve McCurry: Peshawar, Pakistan 1984. I looked for this girl for 17 years and finally found her in 2002. Her name is Sharbat Gula. 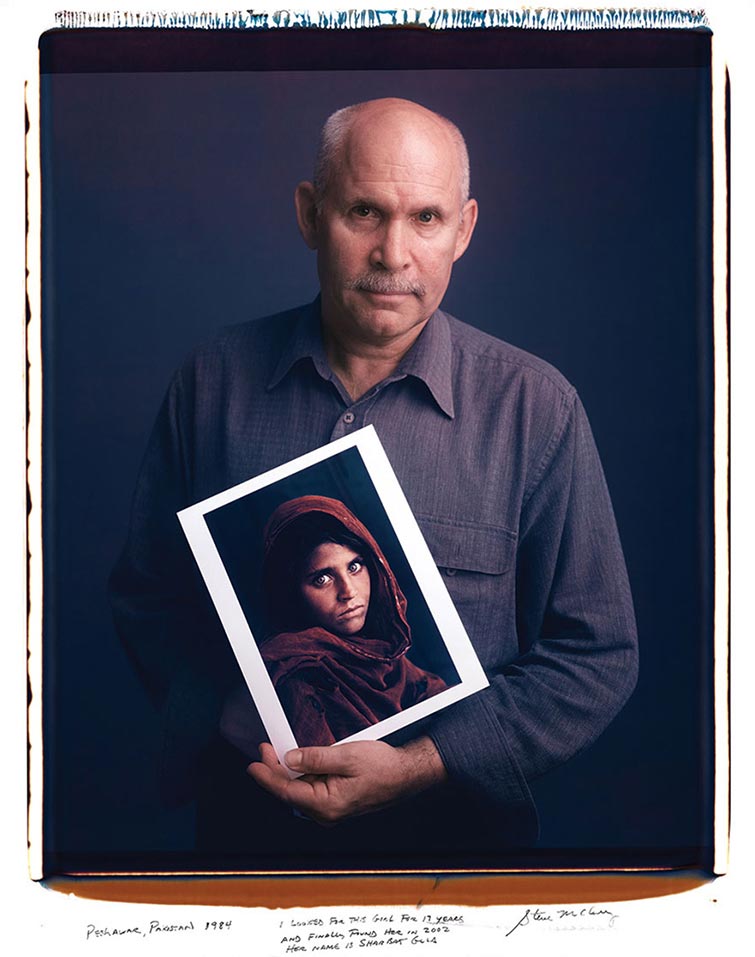 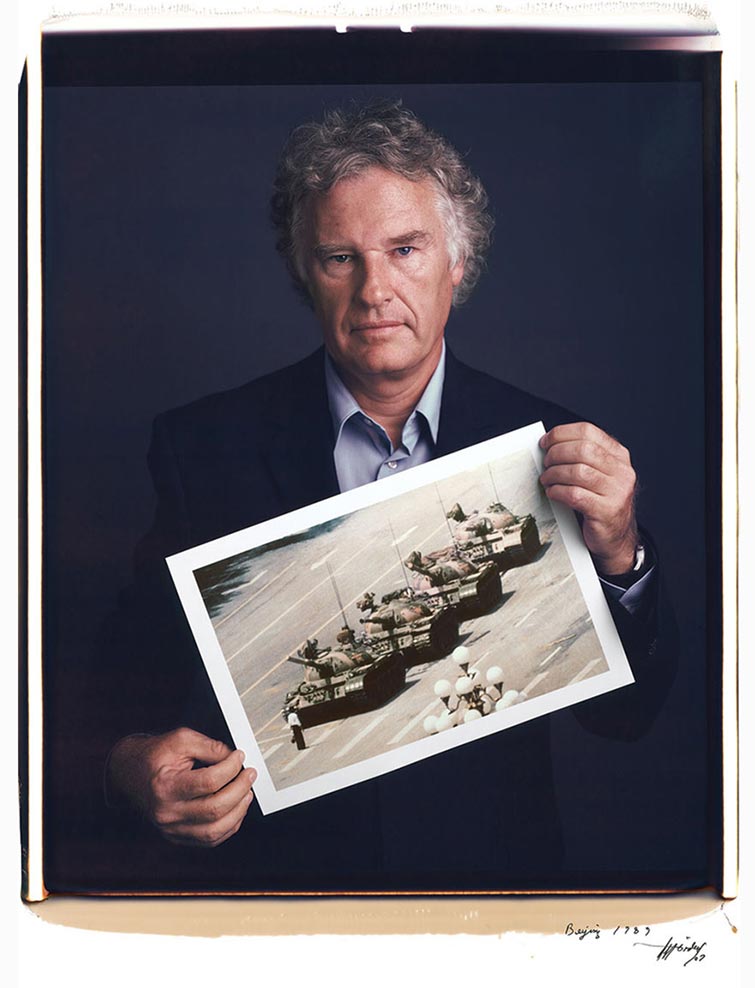 Harry Benson: Brian Epstein – Beatles Manager – had just told them they were number one in America – and I was coming with them to New York. 1964 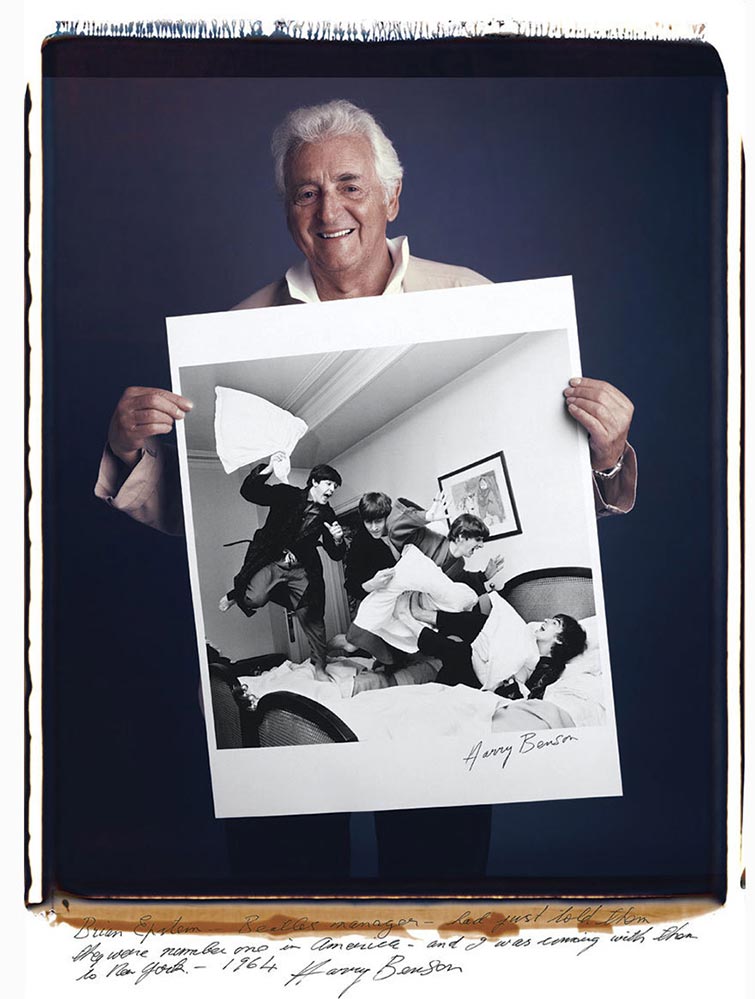 Lyle Owerko: No one knew such a beautiful warm day would serve as the backdrop to one of the most painful and confusing events to the heart of mankind. This picture is one small part of such a huge event that ties the threads of thousands of stories and millions of people together. Written words will never convey the whole scope of the event, nor summarize the sounds, the smells or even voices that are frozen in my memory bank from that day. I did the best job I could in photographing the 9/11 so that future generations would have the idea of the scope of what happened, to have the evidence how innocence can so easily be snatched away in a razor’s edged moment in time. My hope is that in time the wounds and pain will heal and that wisdom and peace will prevail among the darkness of this event so that humanity could move forward into a time of grace and understanding. 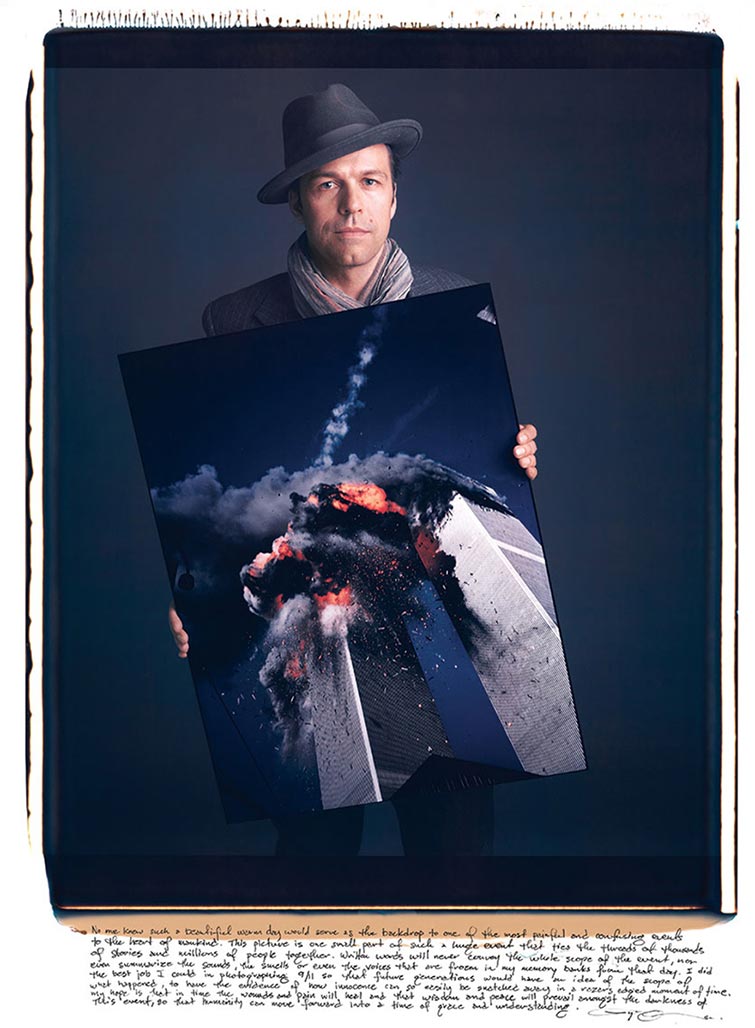 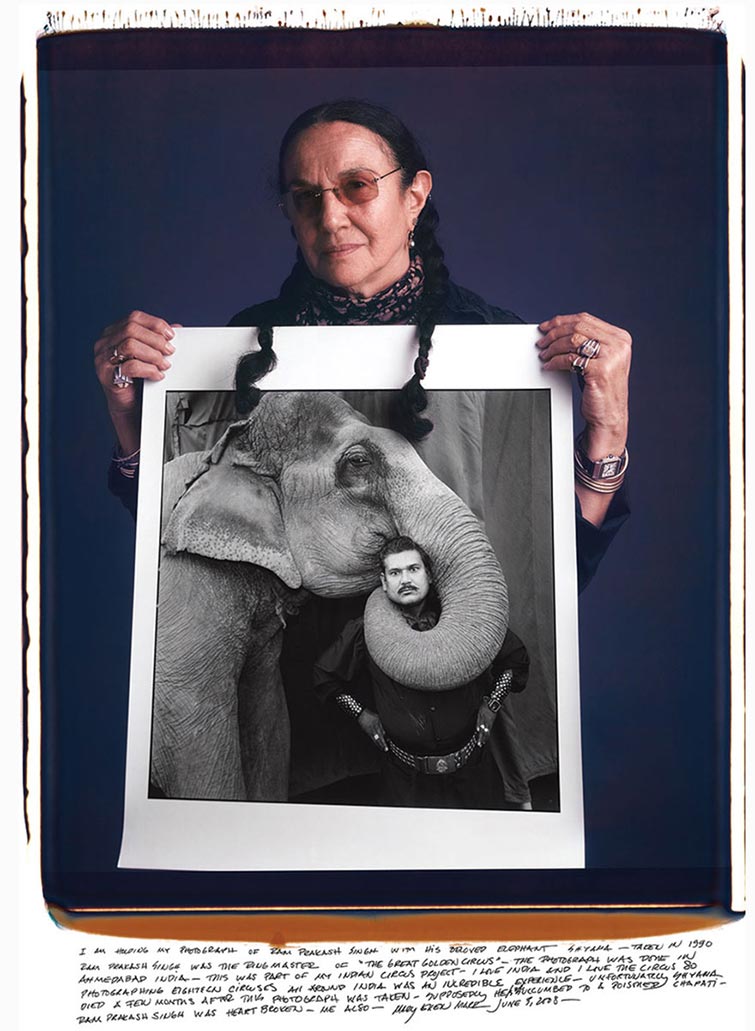 Thomas Mangelsen: Brown bear, Brooks Falls Katmai National Park, Alaska. July 1988. I pre-visualized this possibility (of an image like this) from watching documentary films about the bears at Katmai and seeing a photograph in Alaska Air Magazine of a group of bears here at the falls. At the time, I was on a flight to Anchorage working on a documentary film about Sandhill Cranes and had a week between shoots. I phoned the park headquarters from the airport in Achorage and asked about getting a campsite. They said they were all full – except for one site, that was near the bear trail and nobody wanted it. I told them I would take it. I spent a week on a small platform above the falls trying to capture this image. I would go most days before sunrise and stay until dark. During that time I shot 35 rolls of film of pretty much just head + shoulders of bears + sockeye salmon leaping the falls. Six weeks later I opened the yellow box to see this image. It was a nice surprise. I hadn’t known that I got it. 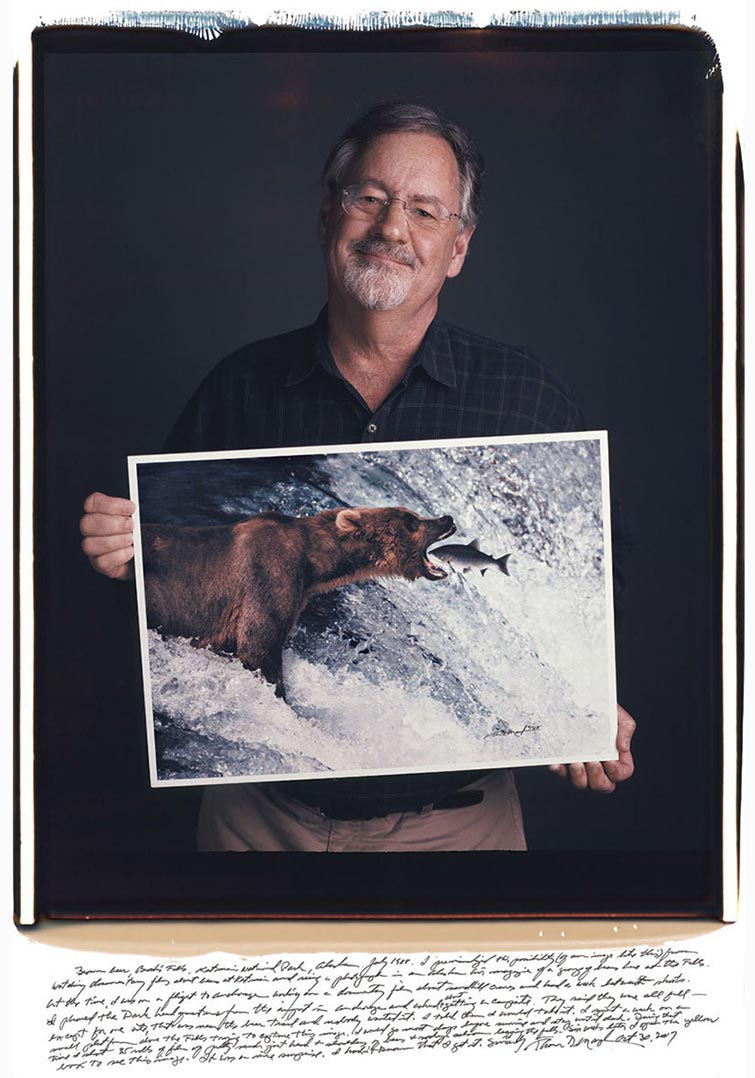 David Doubilet:  Circle of Barracuda, New Ireland, Papua New Guinea. The school of chevron barracudas circled the diver three times and pow they were gone into a dark afternoon sea.   The oceans of the world have no straight lines; geometry like a perfect circle is a rare thing, but these barracudas will do this as a defense.  70% of our planet is an ocean.  It is a place of infinite hidden beauty.  It is a place where light behaves in a very different manner.  Global warming/ climate change is about water.  Coral reefs where I have spent most of my life are very threatened now—not just from rising temperatures but from the change in ocean chemistry = This is a world where my partner Jennifer Hayes and I go into.  It is most of our planet.  A world without corners that may be gone by the end of the century. 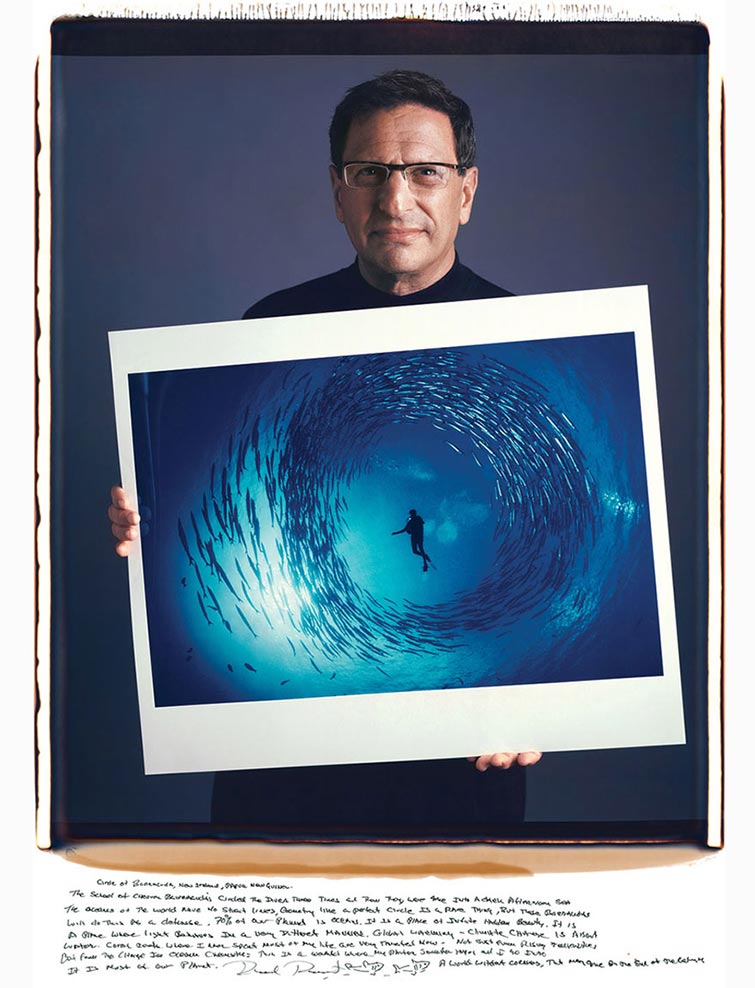 May Pang: Summer 1974 Long Island Sound NY. A relaxing time with his son Julian. I called this photo “Family Portrait” 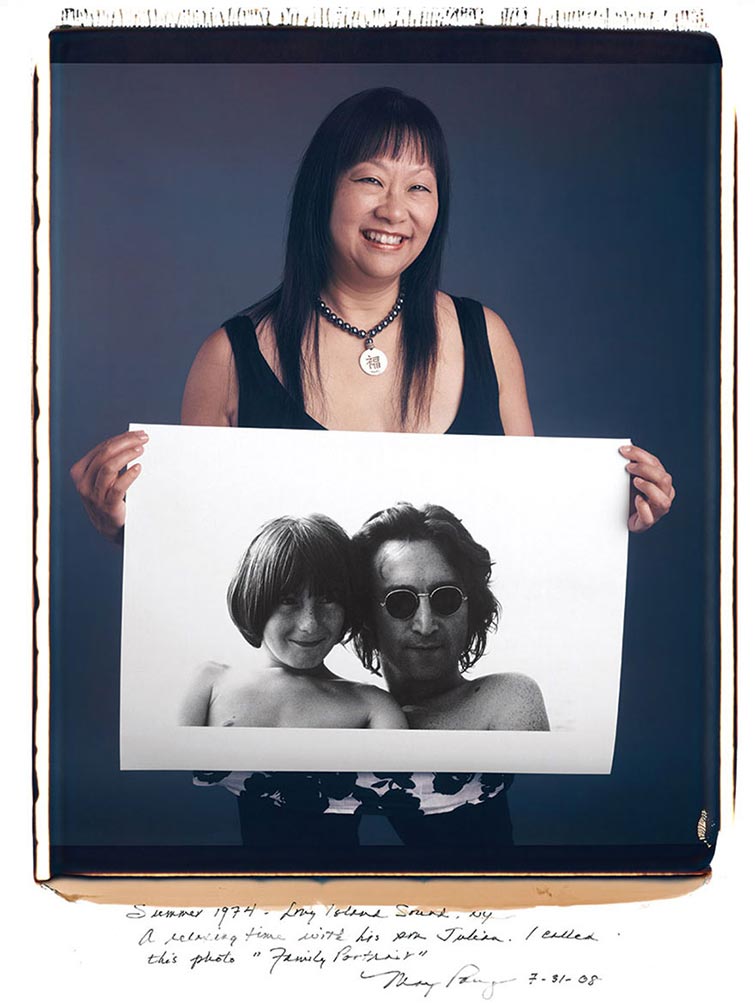