Sally Mann is one of the most well-known and respected photographers of our time, even being awarded the title of “America’s Best Photographer” by Time magazine in 2001. Living and working out of Lexington, Virginia, she focuses primarily on human subjects – oftentimes her own children and family members – and utilizes both posed and candid scenes in order to portray the range of subtleties in human expression and behavior: from the carnal to the playful, the dismal to the joyous. Mann shoots mostly in black and white, giving her photographs a somber, serious effect that augments the exquisite complexity of emotions that she manages to convey with such simple images. Her work invokes an intense sense of intimacy that borders on the uncomfortable, which accounts for the public’s contentious reception to some of her pieces.

This piece, titled Candy Cigarette, is part of her 1992 “Immediate Family” series and is considered to be one of her most famous works – in fact, many consider it to be one of the most iconic images of the 20th century. Taken in 1989, the photograph features Mann’s daughter Jessie gracefully balancing a candy cigarette between her small fingers. While her siblings face away from the viewers, seemingly absorbed in play, she stands coolly regarding the camera, her ruffled white sundress stark against the dark, rural background. Her smooth, unlined face and tousled blonde hair convey the carefreeness of youth, and her gangly limbs and winsome dress represent the innocence of childhood. 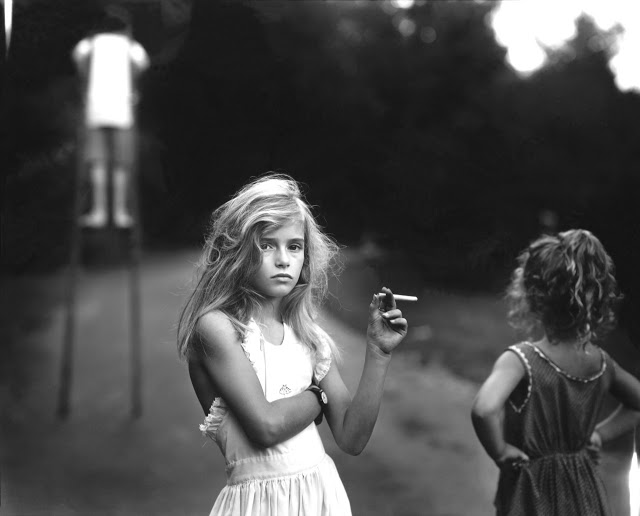 And yet, the audience is somehow still acutely aware that she is not merely a child, but a girl on the brink of becoming a woman. Even though the title of the piece makes it clear that the cigarette she is holding is simply a candy imitation, the ease, and familiarity with which she mimics this adult behavior are nevertheless jarring. Her crossed arms and flat gaze convey defiance, and her eyes carry a weariness that is beyond her years; she exudes the sensuality and worldliness of the woman she has yet to become. Perhaps she is emulating the behavior of the adults in her life, foreshadowing the hardships of adulthood that will one day come to fall upon her.

Or perhaps the cigarette is a symbol of rebellion. While her siblings seem content to remain within the realm of childhood, blissfully unaware of an outside world, Jessie turns in the opposite direction and boldly meets the eyes that observe her – as if she is the one evaluating the camera rather than the other way around. Mann seems to be illustrating the bittersweet tragedy of children maturing too quickly in this ever-accelerating world. Jessie is a captivating child and will one day grow to be a striking young woman, but it seems that the purity of her childhood has already begun to be fray at the edges. Candy Cigarette is both undoubtedly beautiful and unsettling: it is representative of an entire generation, too eager to grow up too quickly.

What do you think of this controversial piece?