Thousands of years before Monopoly, people were playing games like Senet, Patolli and Chaturanga

Playing game is one of the most indispensable parts of human life. Human babies, even animals, start to socialize by playing games. It is easy to observe that humans and animals start to play games from an early age. Board games too have taken place in our life ages ago. They have been an important part of social life and people have benefited from board games while setting up social relationships. From time to time, board games were a part of social classes as well. There were some games that were peculiar to the royalty, the elite, or low-class people. Here are some interesting ancient board games. 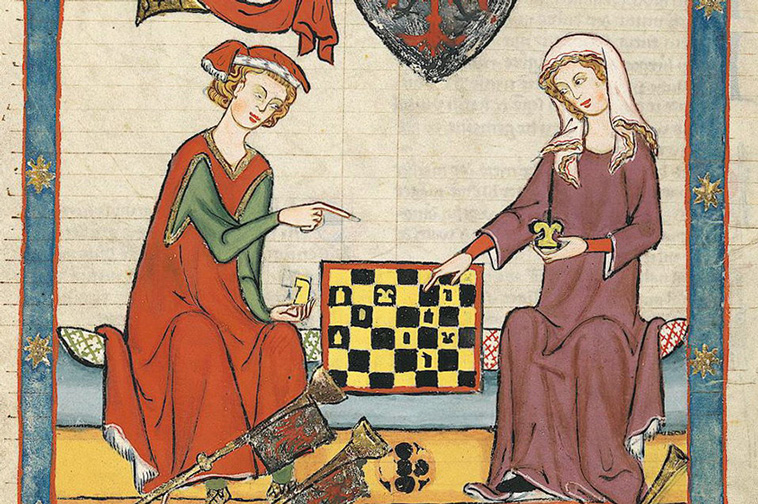 In addition to excavations, the ancient Indian Rigveda, Atharvaveda, Mahabharata, and Buddhist games list mention games involving dice. Also, there are biblical references to ‘dicing’. We know that playing cards and games such as dominoes originated in China. Not surprisingly, it is known that dice games were very popular among the ancient Romans and Greeks too.

What Was the First/Oldest Board Game?

Senet is one of the oldest board games. Archeologists have discovered it among burial sites belonging to the First Dynasty of Ancient Egypt (circa 3500 BC). There were Senet game boards in many of the ancient Egyptian tombs, including even the Tomb of Tutankhamun. Paintings of people playing this ancient game have been discovered in tombs from the Third Dynasty, in the tomb of Rashepes, as well as from other tombs of the Fifth and Sixth Dynasties. Also, an ancient Egyptian funerary text from the first century BC, the Book of the Dead, refers to Senet. 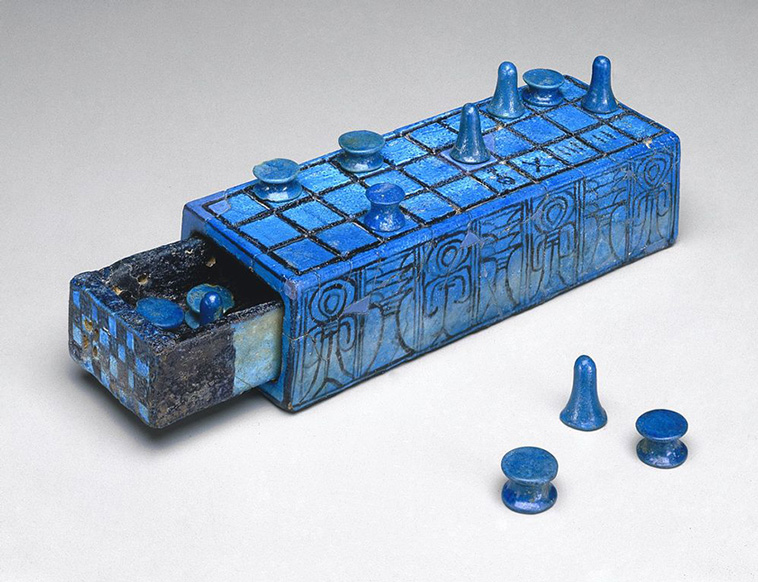 The game was played by moving draughtsmen on a board of 30 squares arranged into three parallel rows of ten squares each. The players strategically moved their pieces based on the throw of sticks or bones. The goal was to reach the edge of the board first. Senet slowly evolved to reflect the religious beliefs of the Egyptians. The pieces represented human souls and their movement was based on the journey of the soul in the afterlife. Each square had a distinct religious significance, with the final square being associated with the union of the soul with the sun god Re-Horakhty. 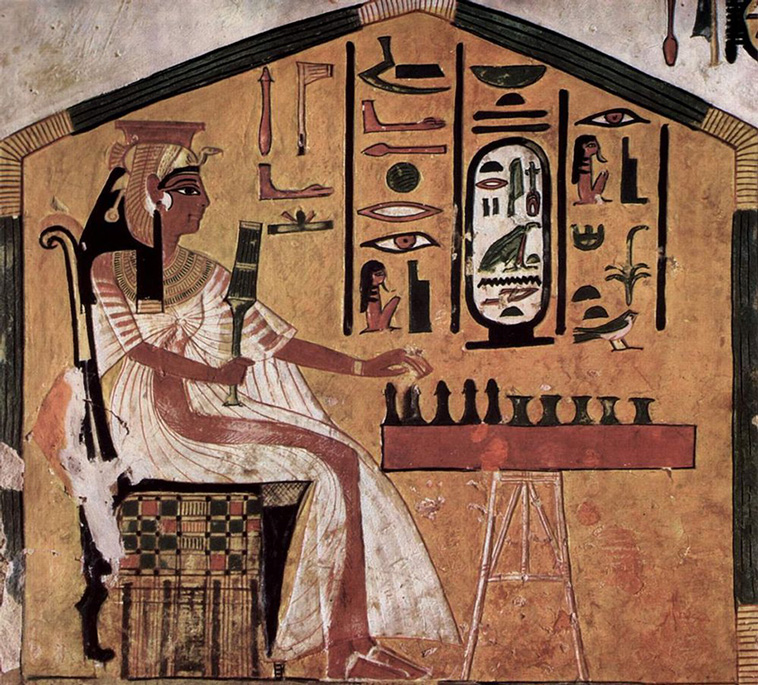 Painting in the tomb of Egyptian Queen Nefertari shows the queen playing Senet.

The Royal Game of Ur

The Royal Game of Ur, or the Game of Twenty Squares, is first played in ancient Mesopotamia in the 3rd century BC. It was named after dynasty Ur when archeologists first discovered it in the excavations of the Royal Cemetery at Ur in the 20th century. When it was found, no one knew how ancient people had played the game. Archeologists found a clay tablet, that was written in 177 BC by a Babylonian scribe, in the 1980s. Thanks to this tablet, which described how the people had played the game in a detailed way, we learned how it was played.

It was a popular game across the Middle East. It has been found at locations as far away from Mesopotamia as Crete and Sri Lanka. The play had a spiritual significance, people thought that events in the game reflect a player’s future and convey messages from deities or other supernatural beings. 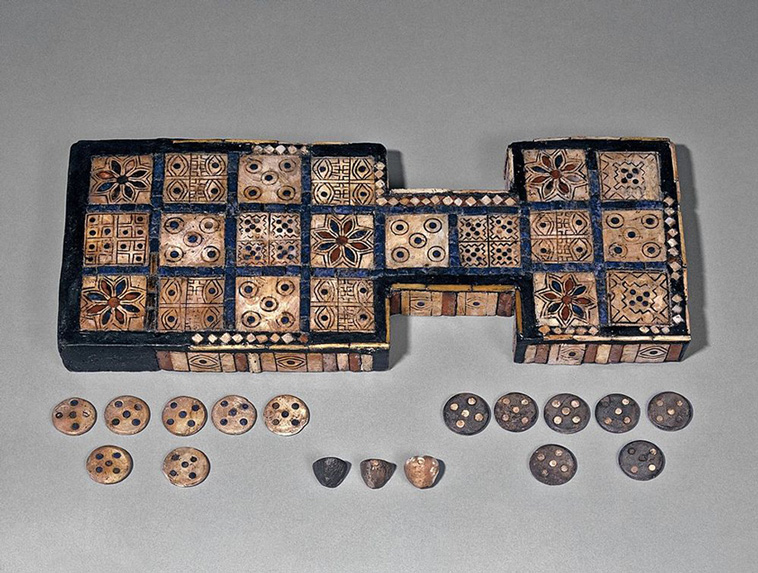 Hounds and Jackals, also known as 58 holes, was first invented 4,000 years ago in ancient Egypt. It was popular around Mesopotamia too in the late 3rd century BC. Archeologists have discovered many Hounds and Jackals game boards in various territories, including Syria, Israel, Iraq, Iran, Turkey, Azerbaijan, and Egypt.

There are two sets of 29 holes and ten gaming pieces which are small sticks with either jackal or dog heads on the gaming board. One player takes either five jackal heads or five dog heads and the other player does so. The aim of the game is to start at one end of the board and to reach the other end with all figures. 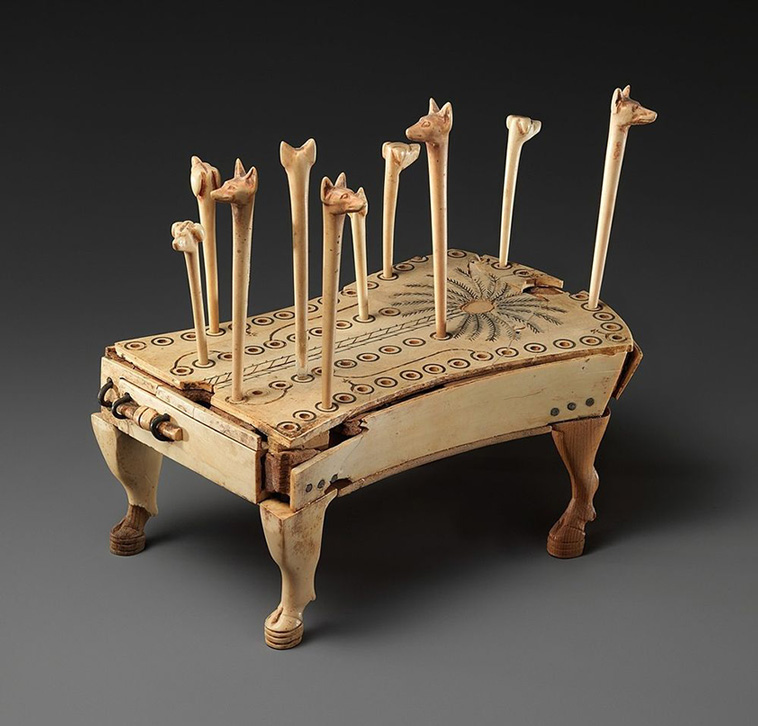 Pachisi originated in Ancient India. It is described in the ancient text Mahabharata under the name of Pasha. It is the dice game that the Pandava brothers famously lost against their cousins the Kauravas, forcing them to relinquish their kingdom and go to exile for fourteen years. 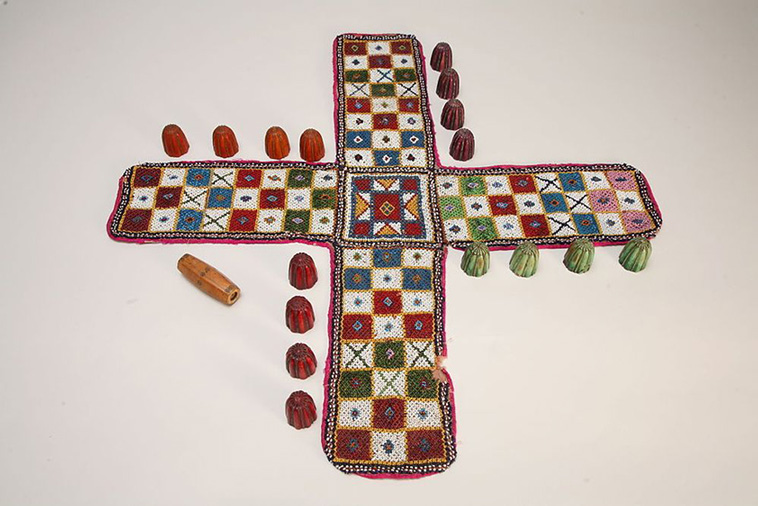 Hand-made beaded board game set (Pachisi), from the Collection of the Children’s Museum of Indianapolis. Photo: Daniel Schwen/Wikimedia Commons

The board game Go was a strategy game that was first invented in China approximately 2,500 years ago. It is probably the oldest board game continuously played to the present day. Legends trace the origin of the game to the mythical Chinese emperor Yao (2337–2258 BC), who was said to have had his counselor Shun design it for his unruly son, Danzhu, to favorably influence him. Other theories suggest that the game was derived from Chinese tribal warlords and generals, who used pieces of stone to map out attacking positions. 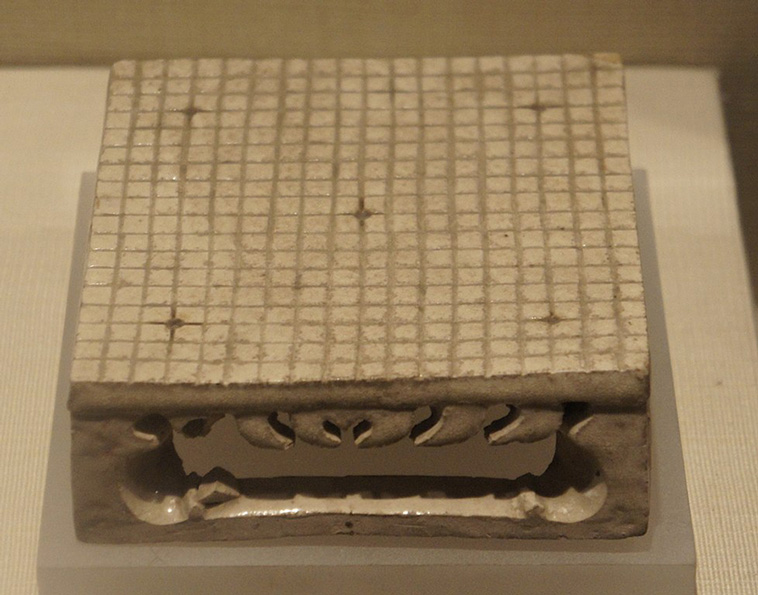 Ludus latrunculorum was a board game that belong to ancient Rome. The name of the game, Ludus Latrunculorum, means “The Game of Mercenaries”. It was a two-player strategy board game that is generally accepted to be a game of military tactics. There is not much information that we could reach about the game’s rules and structure. 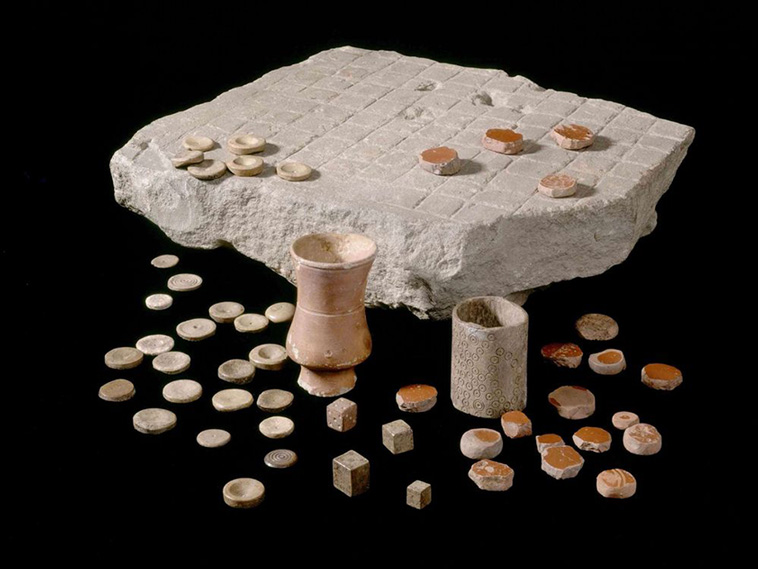 Nine Men’s Morris was popular in Ancient Rome and the medieval period. There is no strong evidence about the game’s origin. But archeologists have discovered a Nine Men’s Morris board in Egypt which they think would be 3,400 years old. It is known that the board game was carved into various buildings’ stones throughout the Roman Empire and in the seats of many medieval cathedrals. 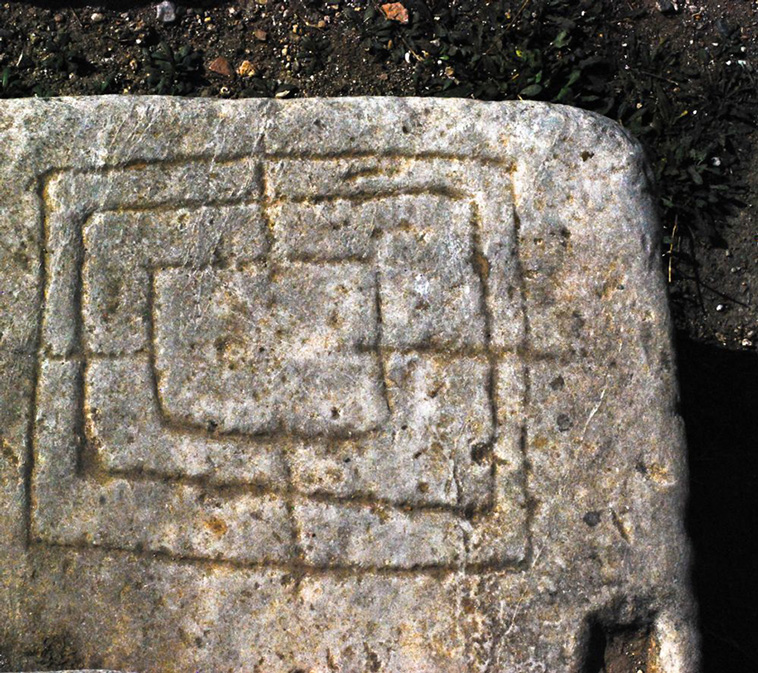 The Knossos Game, also known as Zatrikion, was discovered in 1901 during archaeological excavations of the Knossos Palace on Crete. There is only one copy of the game and there is not much information about it. Archeologists think that the game might belong to approximately 1600 BCE. The original game was made with inlays of ivory, rock crystal, and glass paste, decorated with kyanos blue and gold and silver sheet metal, on a wooden base. 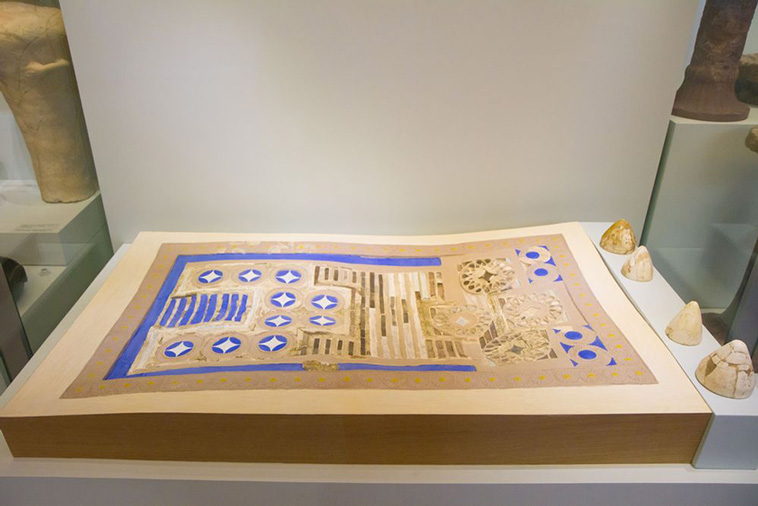 Mehen is an ancient Egyptian game, dating to about 3000 BC. Its name is a reference to the Egyptian snake-god Mehen. The game is a spiral in the shape of a coiled snake with the snake’s head in the center of the disk. 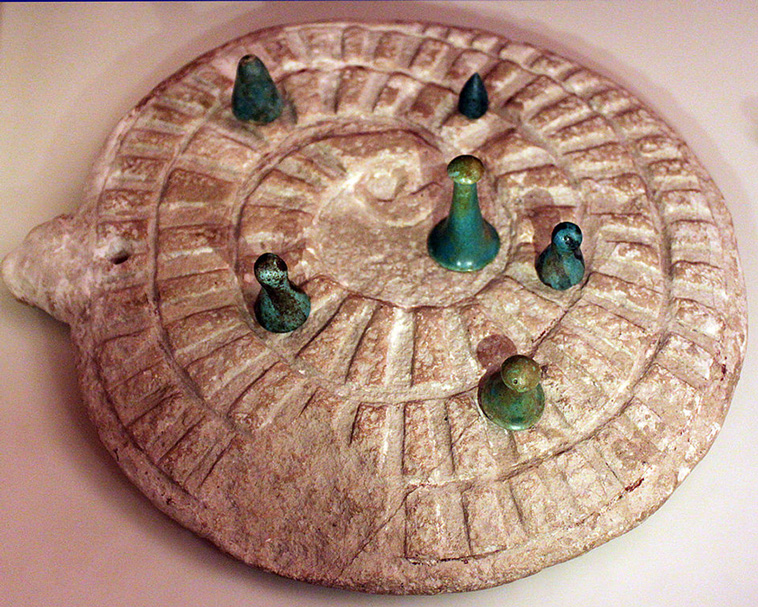 Patolli is one of the oldest board games in America. It was played by a wide range of pre-Columbian Mesoamerican cultures and was known all over Mesoamerica. It is known that Teotihuacanos(the builders of Teotihuacan), the Toltecs, the inhabitants of Chichen Itza, the Mayas, and the Aztecs played this game. The game was a strategy game in which also luck took place. Even if it is similar to the Indian game Pachisi, experts think that this similarity was derived from just coincidence and the limitations of a board game. 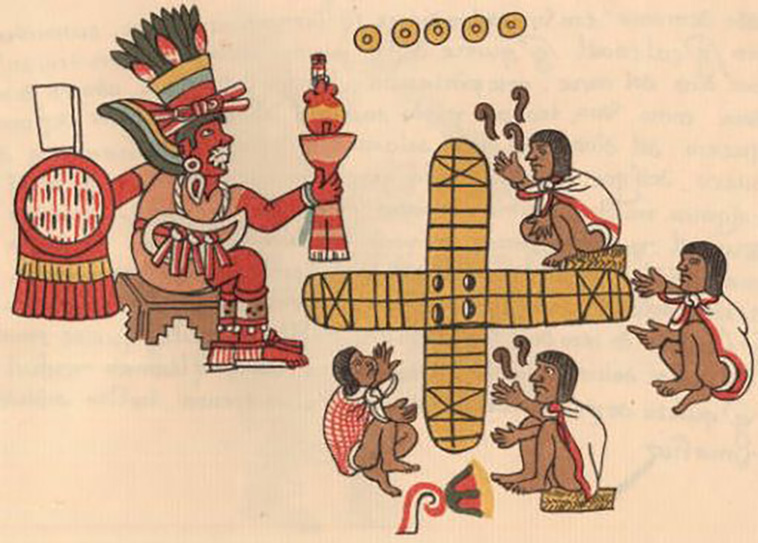 Patolli game being watched by Macuilxochitl as depicted on the Codex Magliabechiano.