Born in Kenya’s Mara Reserve, this baby zebra has a unique polka dot appearance. He was ‘spotted’ in 2019 by a group of photographers who were on the search for rhinos. Photographer Frank Liu noticed the eye-catching plains zebra, likely about a week old. “At first glance he looked like a different species altogether,” Liu said.

Melanism is a rare condition that can make for some interesting-looking animals.

It’s caused by an over-development of melanin in the skin and can turn animals completely or partially black. Melanism is the opposite of albinism, and leucism, conditions that can turn animals white.

Some animals develop melanism intentionally, like certain black-bodied peppered moths and two-spot ladybugs, which have evolved darker colors because they live in areas impacted by industrial pollution.

Pseudomelanism, also called abundism, is another variant of pigmentation, identifiable by dark spots or enlarged stripes, which cover a large part of the body of the animal, making it appear melanistic.

In the same way that humans all have unique fingerprints, every zebra has a unique pattern of stripes.

This zebra foal could be the first in the Masai Mara area to have this unique coloring, Liu told National Geographic.

Adorable Italian Zonkey is Half Zebra, Half Donkey 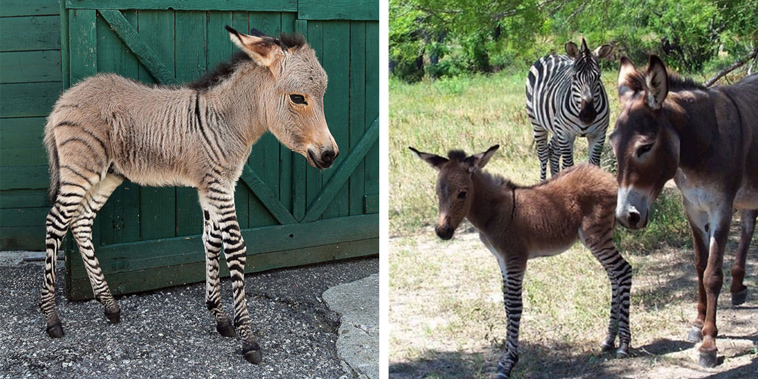