Without a doubt, this is one of the most incredible dog rescue stories you will ever read about.  Imagine the shock and anger when the workers at Paws for Hope  got a call that an abandoned German Shepard dog was found in the LA river and had been there for weeks already.  It would hurt anyone involved, but this rescue center knew that it was up to them to rescue this sweet dog who was desperate to get out of there. 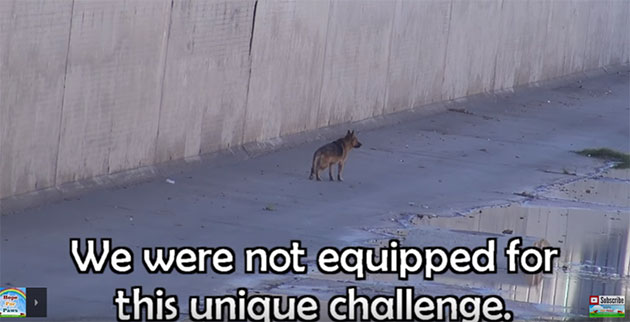 Thus, brace rescuers decided to tie two ladders together and a brave volunteer made his way into the river where he had to coax the dog to trust him.  When Biggie, the dog, feared the leash, he was careful to make sure that he kept the dog’s eyes covered so that he could stay still and get this dog to safety.  Watching the rescuers above pulling Biggie to safety is heartwarming and impressive, especially considering all of the danger and fear that could have overwhelmed either dog or human at any time.

We live in a world where those who abuse and abandon dogs and other animals are not punished like those who do the same to children.  For animal rescuers everywhere, it is a trouble that many hope to see fixed in the years to come one way or another.  As we can see in this video, there are people out there who are ready to help those dogs in need.