Paramedic Chris Porsz spent hours walking around the city of Peterborough, Cambridgeshire (Great Britain) in the late 1970s and 80s, taking candid shots of punks and policemen, siblings, and sweethearts, traders and teenagers. More than three decades later, Chris has reconstructed a handful of his favorite photos from his collection. He spent the last seven years tracking down the people in his pictures and persuading them to pose once again. His hard work paid off and he has now published his photos in a new book, “Reunions”.

“This book has been nearly 40 years in the making and I believe the project is totally unique. I don’t think anyone else has tracked down so many strangers and recreated photos in this way before,” said Chris. 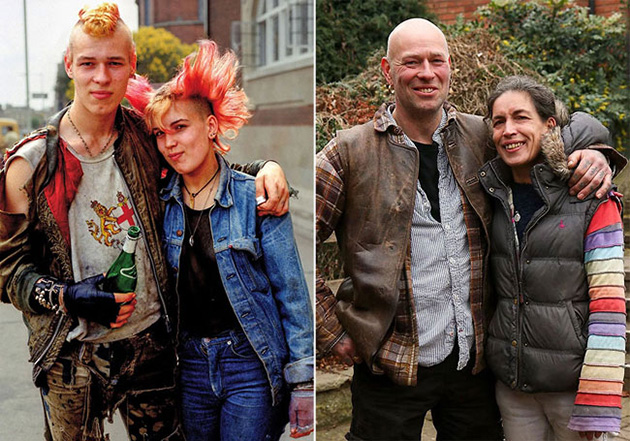 Dog and Tina – Original, 1985/ Reunion, March 2015. Punks Tina Tarr and her partner Dog were pictured near the Cathedral in Peterborough when Tina was 18. The couple left the city in the 1990s and went traveling. They have twins but are no longer together. Tina now lives in Dorset and makes willow products and hosts weaving workshops. A dog does hedge laying and gardening and lives in South West Wales. ‘I remember the photo being taken, it was a brilliant time. I had various styles of punk hair for quite a few years,’ said Tina. Dog added: ‘They were good times, I still had hair then’

Out from behind the Curtains – Original, 1980. Left to right, Shehnaz Begum, her twin sister Rukhsana and their older sister Itrat were spotted sitting in the window of their house on Cromwell Road. ‘We often used to perch in the window and watch what was going on in the road,’ said Shehnaz. ‘My twin sister and I were about seven and Itrat was nine. We loved riding our bikes with the other children in the street and were good friends with another set of twins. Mum said we were quite a handful’ 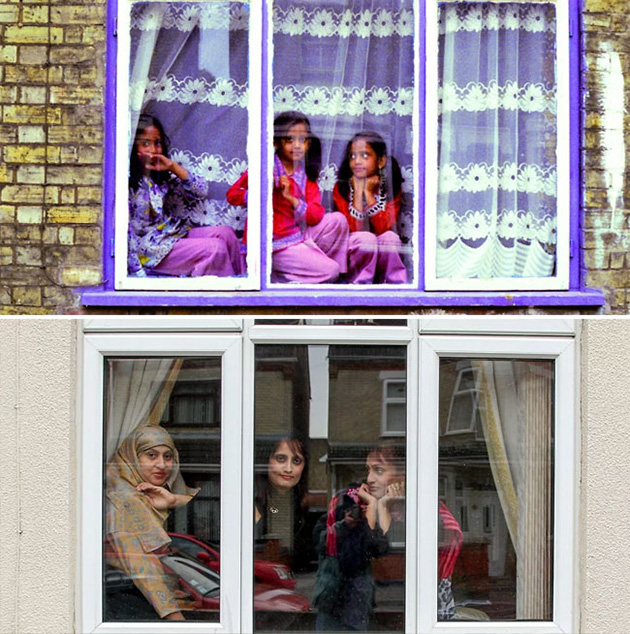 Reunion, January 2013. The three sisters still live in Peterborough and see each other regularly. Shehnaz, who is divorced, has a daughter and looks after elderly and disabled people, together with her twin, who is re-married and has five children. Itrat works for the post office and is married with six children 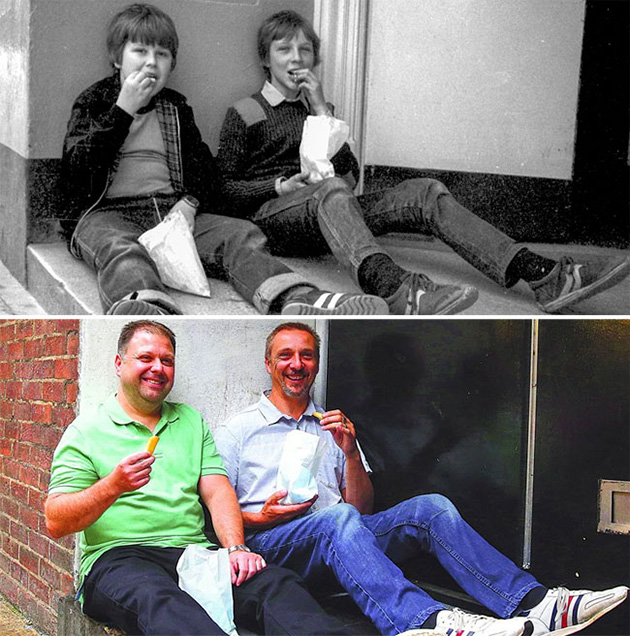 Eating Chips – Original, 1983/Reunion, August 2016. School friends Martin Coulson (left) and Andy Randall were eating chips bought from the arcade which has now been replaced with Wilkinsons. ‘I think it must have been a Saturday and we’d been to the chip shop. The chips were a bit like McDonald’s fries and were always good,’ said Martin, who was a warehouse manager and is currently re-training. He is married with two children. Andy is a telematics engineer and is married with three children. He added: ‘We were probably going around the toy shops together as we had a Scalextric track’ 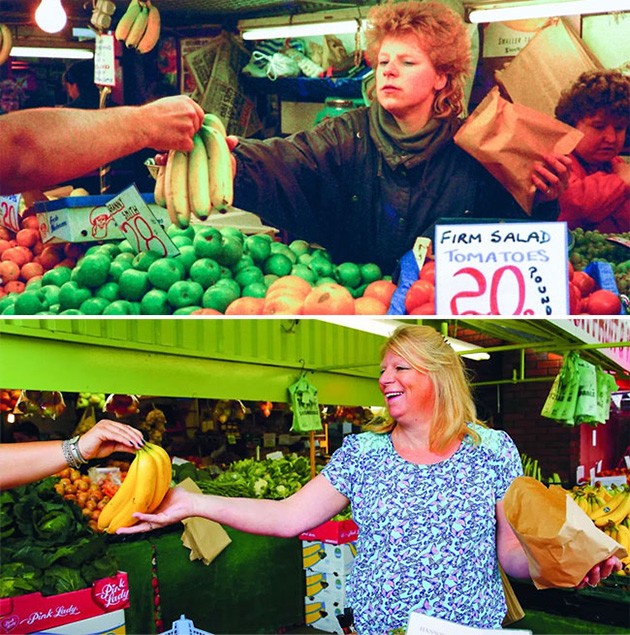 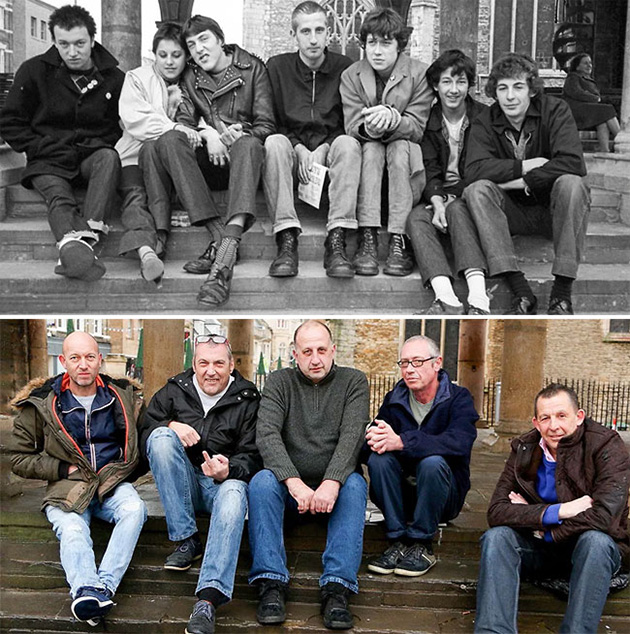 Punks on steps – Original, 1980/Reunion, January 2015. Left to right, friends John Church, Kim Guest, Gary Wymer, Mirko Obradovic, Ade Lawrence, Sean Adams, and Mark Winsworth were pictured on the steps of Cathedral Square. John is now a painter and decorator and plays in a band with Ade, who is now a bin man. Kim and Sean have died and Mirko works in a brickyard. Gary was working as a butcher when the original picture was taken. In his early 20s, he almost died after hitting his head on a bridge as he was cruising down the River Nene with friends. He was in a coma for a week but made a complete recovery. He went on to travel around the world, teaching English in Turkey and later settling in Colchester, Essex, where he now runs an industrial cleaning company 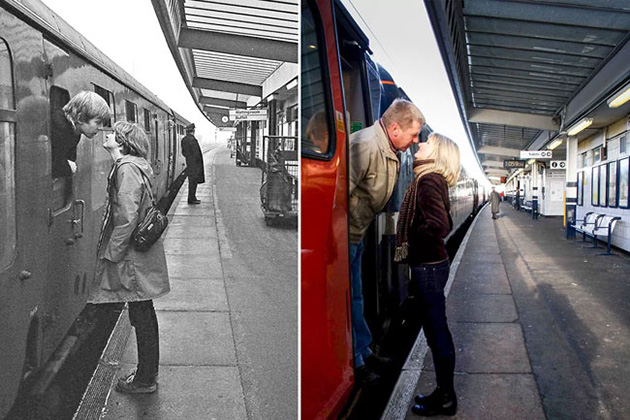 Railway Kiss – Original, 1980/ Reunion, December 21, 2009. Tony Wilmot was snapped saying goodbye to his girlfriend Sally at Peterborough Railway Station in 1980 and a year later they got married. Tony was 22 and working in Essex as a teacher and Sally was 21 and based in Stafford as a local government officer. On this occasion, they had met up in Peterborough and had no idea the photo had been taken. It appeared over 30 years later in a local paper the Peterborough Evening Telegraph and was seen by Tony’s father. The pair, who are now both headteachers and live in Lichfield, Staffordshire, have two children Tom and Jenny who are themselves in their twenties 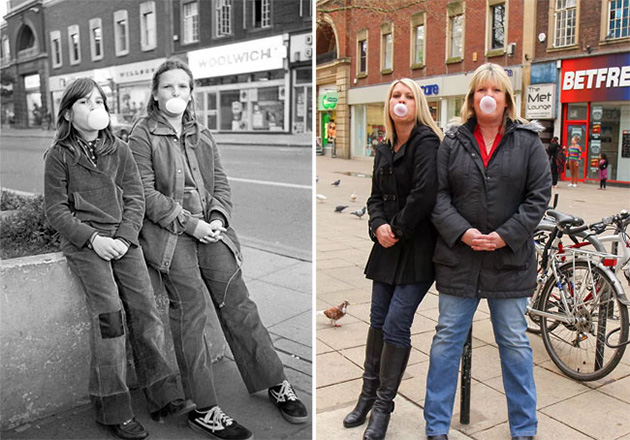 Double Bubble – Original, 1980/ Reunion, April 2012. Sisters Anna (left) and Emma Hankins posed for a picture blowing bubbles with Hubba Bubba bubblegum in Bridge Street. Anna was 11 and Emma was 13 and the girls were waiting for their mum while she was shopping. The siblings, who both went on to have careers in hairdressing, are now married and have families. They still live in Peterborough and see each other regularly. Anna now works in a pharmacy and Emma works for the Ideal World shopping channel. ‘It was hard trying to blow bubbles again after such a long time and took quite a few tries,’ said Anna

Ice cream Seller – Original, 1980. Genesio (Gino) Borrillo bought an ice cream van when he moved to Peterborough from Italy and traveled around the city in the summer selling ice cream 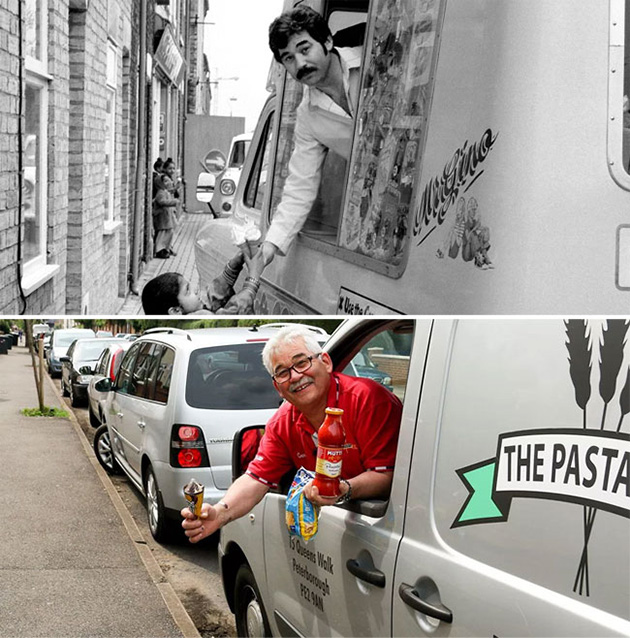 Reunion, July 2014. In 1992, GIno set up a pasta shop in the city, which he still runs with his daughter. He is married and has three children and four grandchildren

Metal Mickey – Original, 1980. Steve Osborn was known as Metal Mickey in the 1980s as he broke both his legs several times in a series of motorbiking accidents and had plates and bolts put in them. He said: ‘I even carried on riding my bike with my leg in a cast!’ 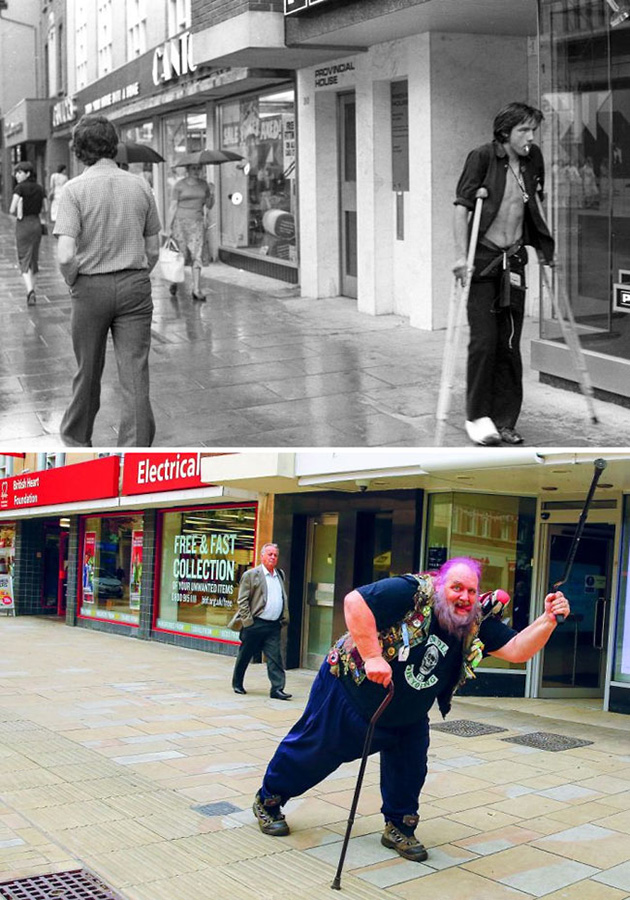 Reunion, May 2016. Steve, who now uses walking sticks to get around, lives in Spalding, Lincolnshire and is married. He had four children, but his son died in 2012. Steve plays the guitar with different bands and has raised more than £20,000 for the National Association of Bikers with a Disability 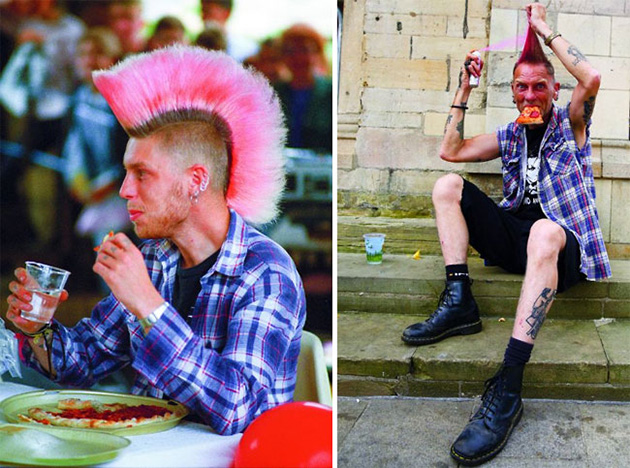 Pink Mohican Wins Pizza Eating – Original, 1985/ Reunion, July 2016. Punk Badger Farcue can still remember winning the Pizza Eating Competition in Cathedral Square. The contest was organized by Stefan Malajny, who ran the Papa Luigi pizza restaurant. Stefan said: ‘I remember Badger managed to eat his pizza in about two minutes, which was very fast.’ Badger was 20 at the time of the contest and worked as a laborer, building dry stone walls. He said: ‘My friends encouraged me to enter and we had to try and eat a 12-inch cheese and tomato pizza as quickly as possible. I won and got a round of applause and a front page of the local paper.’ Badger, who has five children, moved to Somerset in 1991 and now tarmacs roads

Five Boys Running – Original, 1980. Left to right, Andy Jackson, Richard Hillson, Devinder Singh, Tony James, and Aaron Meadows were around 15 years old here. They are seen running to the chip shop, then on to play arcade games at the A and B record store in their lunch break. About a year later, the all-boys school closed down and their year group was moved to a new school 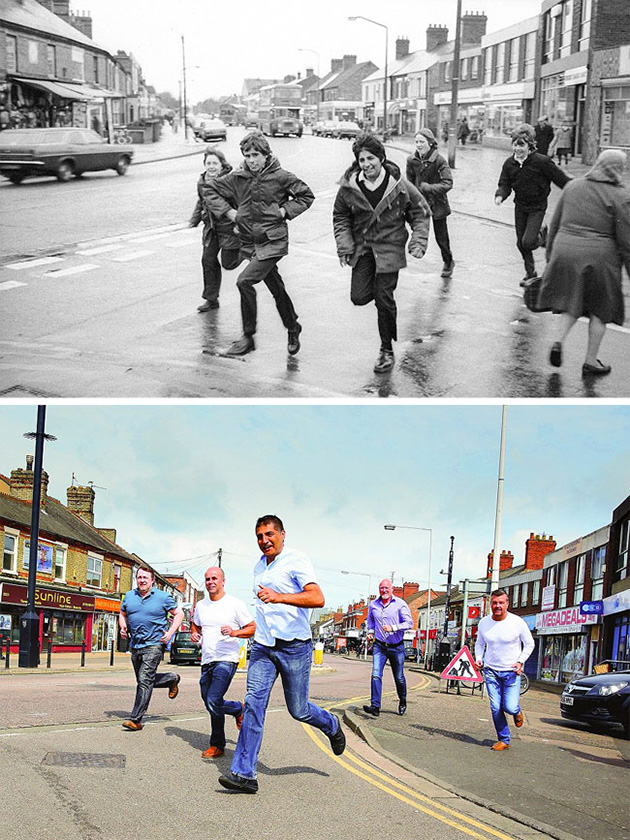 Andy, who has been married for 21 years and has a daughter, said: ‘I remember playing the arcade game Phoenix, which involved birds hatching out of eggs.’ Andy went into the Army after leaving school and drove trucks in the Transport Corps. He left in 1987 and has been working for the Royal Mail in Werrington, near Peterborough, ever since. Richard is now an electrician in Peterborough and is married with two boys. He said: ‘There were only about 70 of us in our school year and we were all really close. They were happy times.’ Tony James works as a stone cutter and has two children; Aaron works at Ikea and is married with three boys. Devinder moved to Yorkshire in 1986 and is married with two boys and works for the Housing Association. They’ve organized a school reunion and plan to keep in touch