“After everything that she’s been through, she’s the sweetest animal.”

Georgina Milhet was spending her day with her nephew in the suburbs of Miami. They were on a horseback riding when she realized something unusual. It was an amateurish chicken coop.

Inside of this cage was a dog, a white husky, trapped. 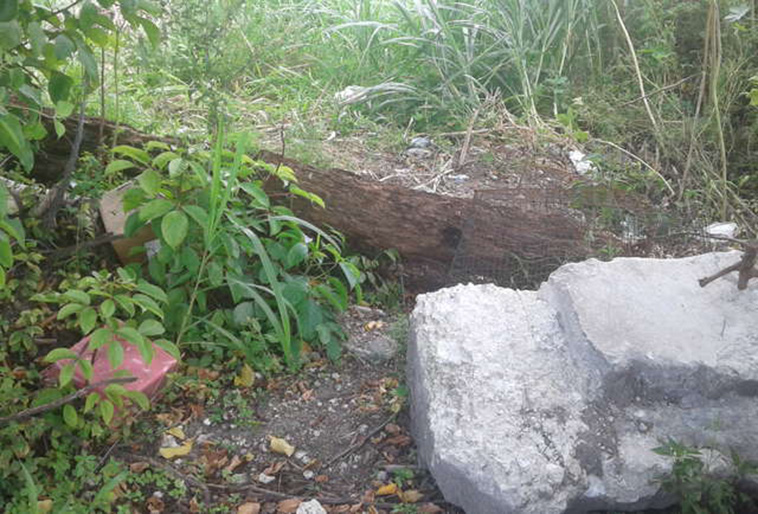 “I see this cage, and this dog with her tongue out,” Milhet told. “Immediately, I yell to my nephew, ‘Throw me the bottle of water.’ I jumped off the horse and got close to the cage to see how she’d react. She was wagging [her tail], tongue out, and drank the whole bottle of water.” 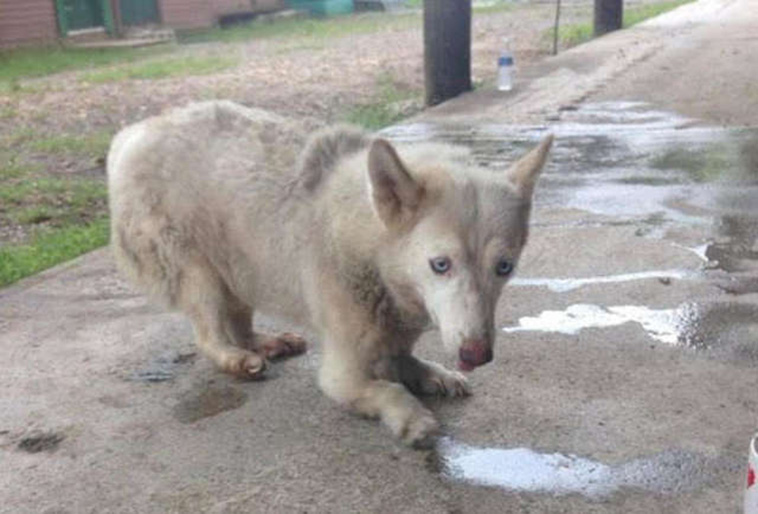 The dog started to move a bit but her way of moving was stranger than the situation. She used her stomach to crawl. All of her four legs were at different and odd angles. Her nails were twisted. And her stomach was wounded. 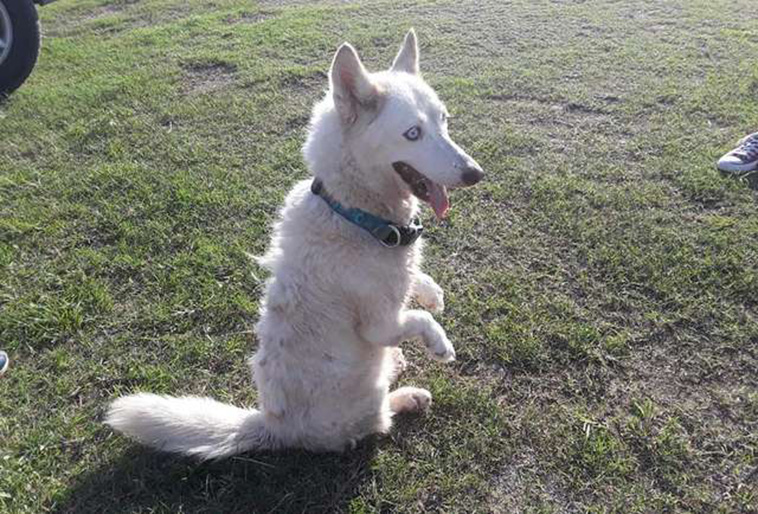 “That’s when I thought, ‘Oh Christ, this dog can’t walk!” Milhet said. “I thought she was injured or run over.” “I have seen things that are beyond, but I have never seen anything like this,” Milhet added. “Her paws looked like bags they were so bruised, and her nails were so ingrown that they grew backwards into the paws.” 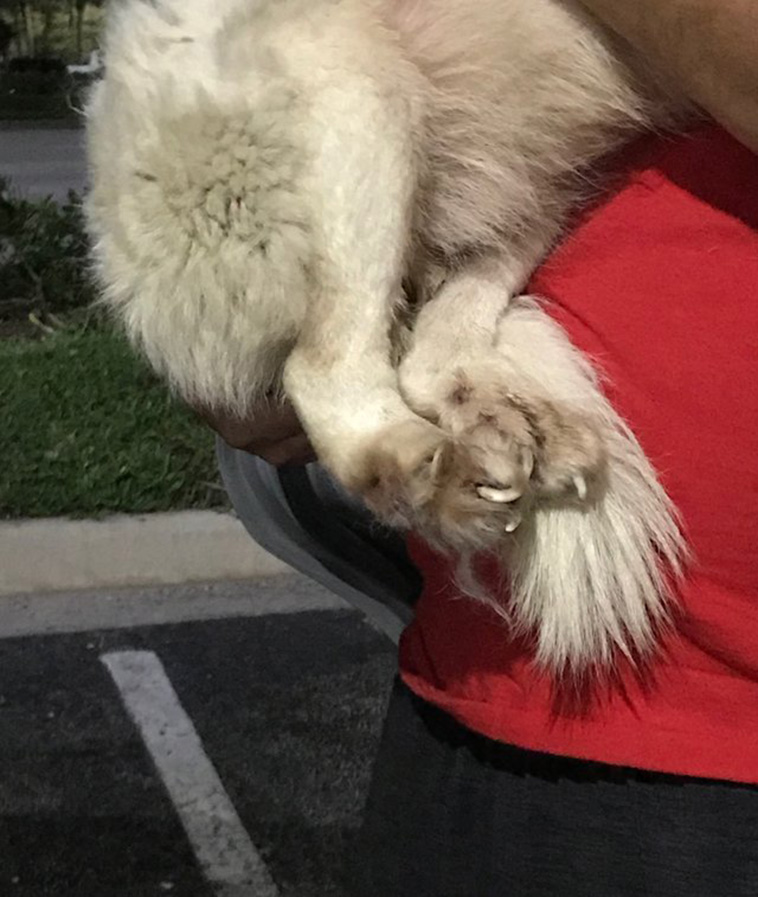 Milhet’s nephew offered to go get a car and take the dog but Milhet couldn’t leave her there.

“She’s so sweet, I couldn’t leave her there,” Milhet added. “I didn’t have the heart — and her tail was wagging.”

So, she took the husky with them and turned back home. Milhet cleaned the dog and named her Lucky. She also trimmed her fur. Below the thick fur was there many scars that might have been due to the cage.

When she posted the story on social media, a rescue group, named GTS Husky Rescue, also heard it and decided to help. They took Lucky to a vet the day after she was found.

Lucky was 2-3 years old husky. She was malnourished for a long time. The reason of her twisted legs was unknown. It was said that there might be a couple of reasons.

“She has major deformities of her legs, and there are different possibilities for how that could have happened,” Natalie Lucia, director of GTS Husky Rescue, explained. “We have been told that it may have been a result of her being kept in a cage, it could have been caused by bad injuries that she was never treated for … and there’s always the possibility that she could have been born that way.” 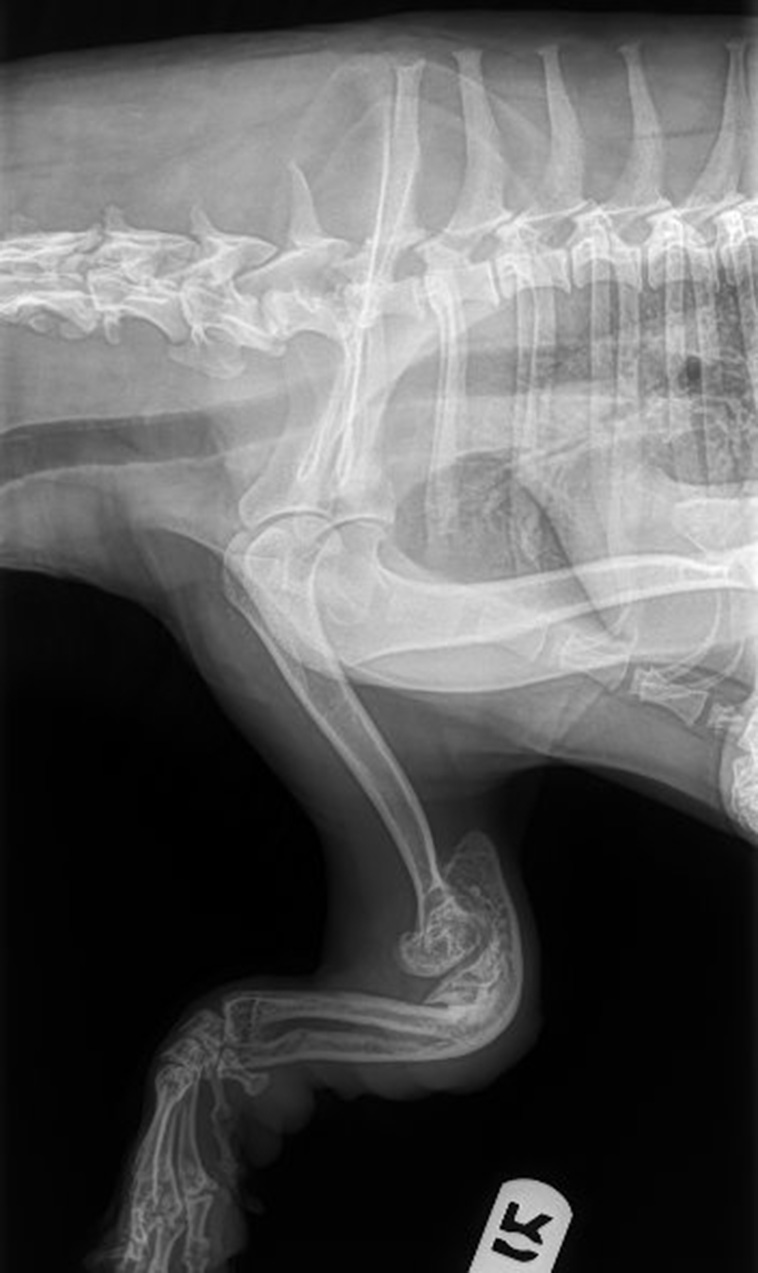 Lucky was having a hard time walking because of the deformed body. Lucia wanted Lucky to have surgical operations. However, all the vets they have went refused to do that since it might be too painful for the dog.

“We took her to a top orthopedic surgeon in our area and he doesn’t even recommend surgery,” Lucia said, “because it would require too many surgeries and be too painful because of the nature of the injury.” 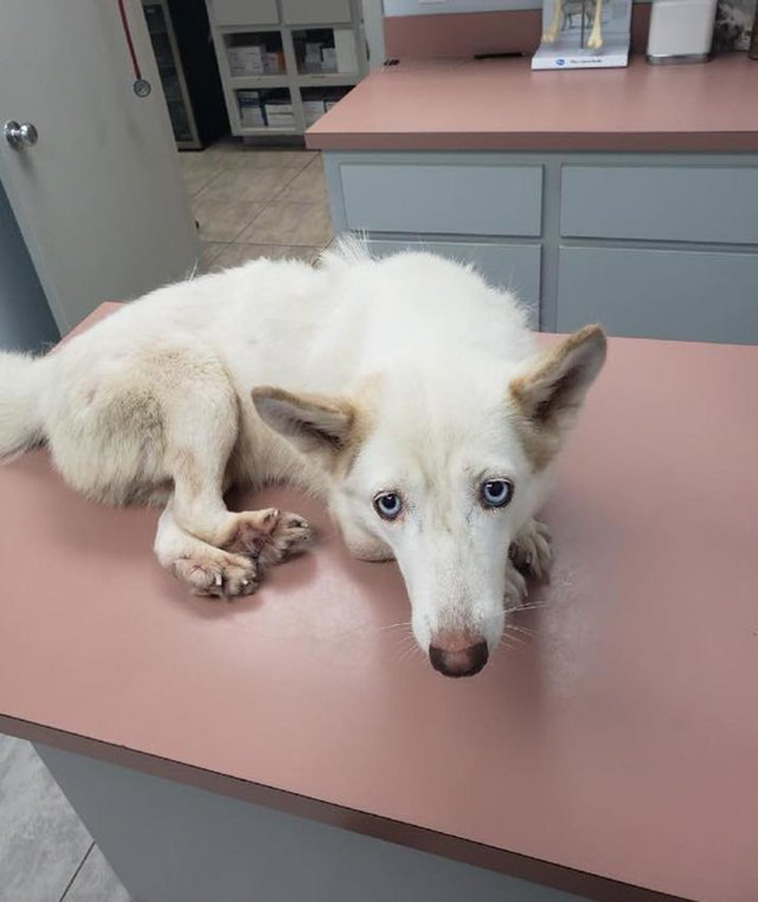 After many opinions, they decided to use specially designed prosthetics for her legs. Through these legs, she would gain her freedom for the second time.

Until that time, she will be staying in the facility of GTS Husky Rescue. It was heart melting to see her tail wagging despite the pain she was experiencing. In that facility, she is very happy. She has her own bed and toys. She also likes to be held. Lucia says that, after her mobilization, she can be adopted since she has a very nice and friendly personality. 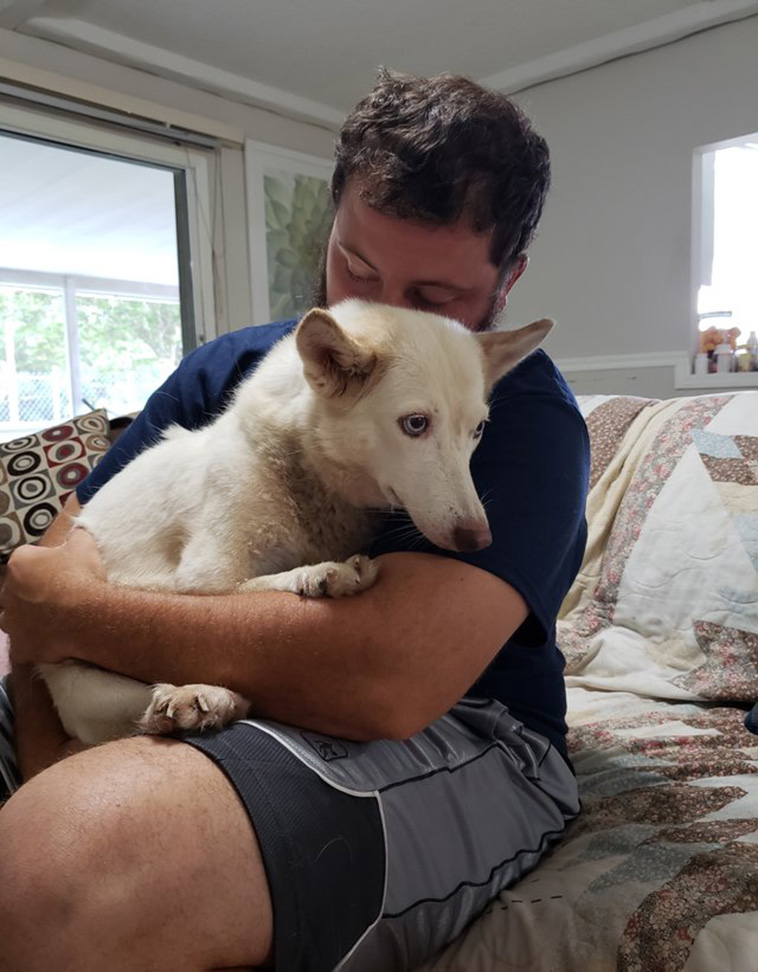 “This dog is one of the sweetest dogs in the whole world,” Lucia said. “She wants to kiss you and she wants to be next to you, and there is not a mean bone in her body. After everything that she’s been through, she’s the sweetest animal.” 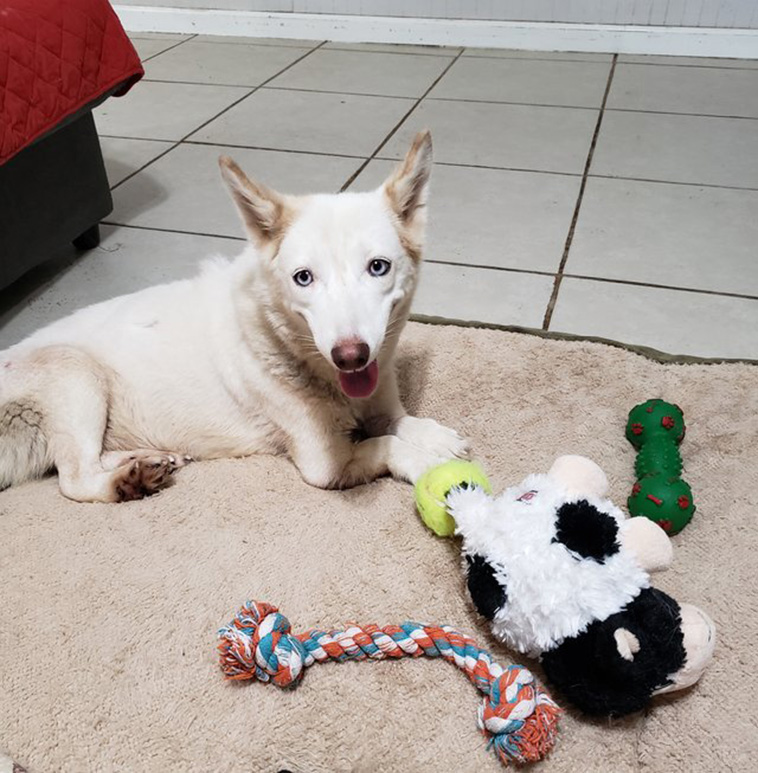 Lucky’s story also created an awareness among rescuers. Where she was found, named Redlands, is a place that unwanted dogs were dumped. Hopefully, the rescuers would have sufficient support to change these dumping behaviors and increase awareness. 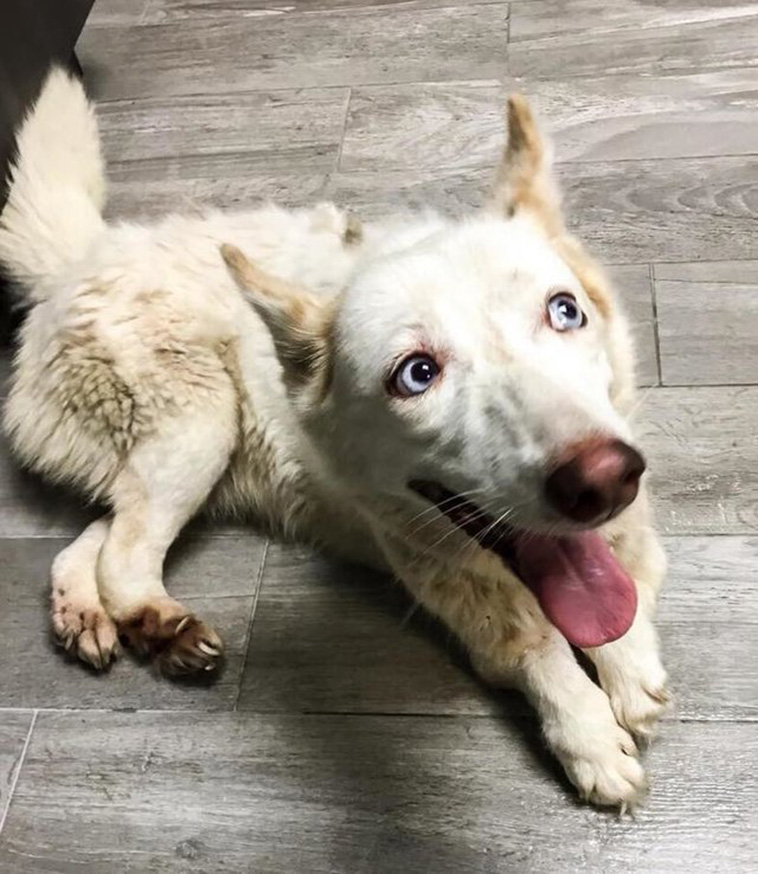 However, their focus is now on Lucky and her well-being.

“We’re focusing on getting her better,” Lucia added, “so she can go on to this next stage where we can get her mobile, and she can finally be a dog.”