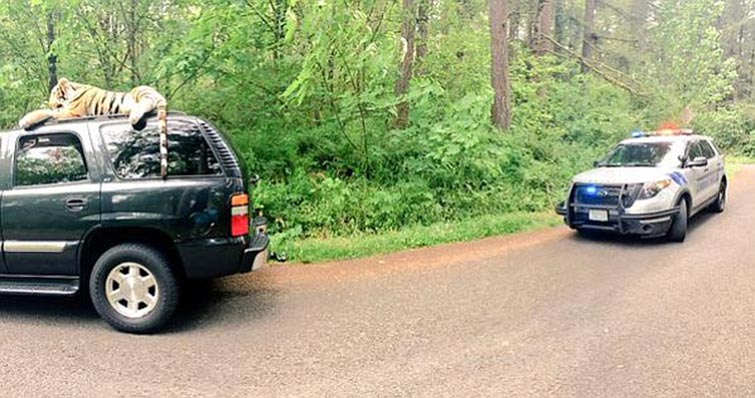 In a shockingly funny incident, a stuffed toy tiger tied to the top of a car made people ring 911, thinking of it to be a real tiger. This incident happened in Camas, where Connor Zuvich, a native of Vancouver was chilling in Lacamas Lake along with his buddies. A driver dumped a few trash bags somewhere nearby and Zuvich picked a tiger from the trash, which he tied to the top of his SUV.

Zuvich too said that the tiger looked real and hence decided to keep it. He was cruising near Lacamas Lake, when onlookers called up the police to report an animal problem. This made Officer Henry Scott to pull over Zuvich, who initially thought it was not allowed to tie something on top of the vehicle.

However, he then realized that it was all due to a 911 call being made. This made the officer burst into laughter and both of them cracked jokes on the incident. Zuvich is a graduate at the Mountain View High School. He would have been in real trouble if it was a real tiger tied!