A heartbroken pit bull was being emotional when received by a high-kill shelter, the dog only sniffed the treat he was offered by a person but did not eat it. 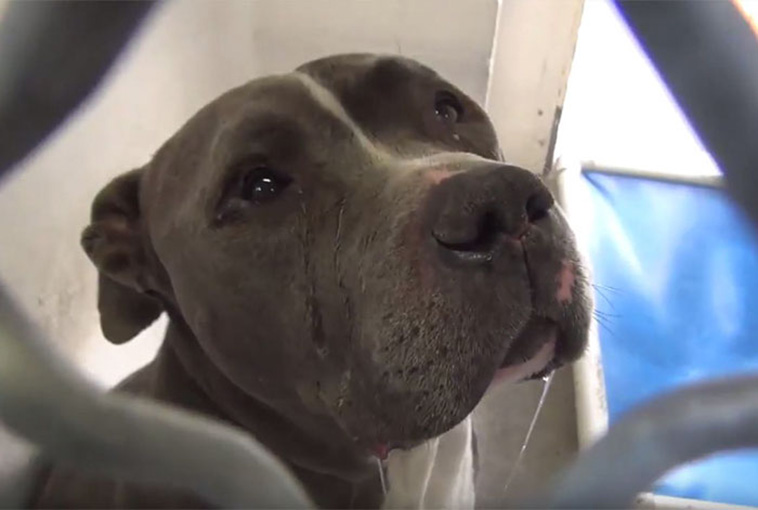 He kept crying behind the bars of his door, shedding tears from his eyes, all because of his family and this seems to be allergic. 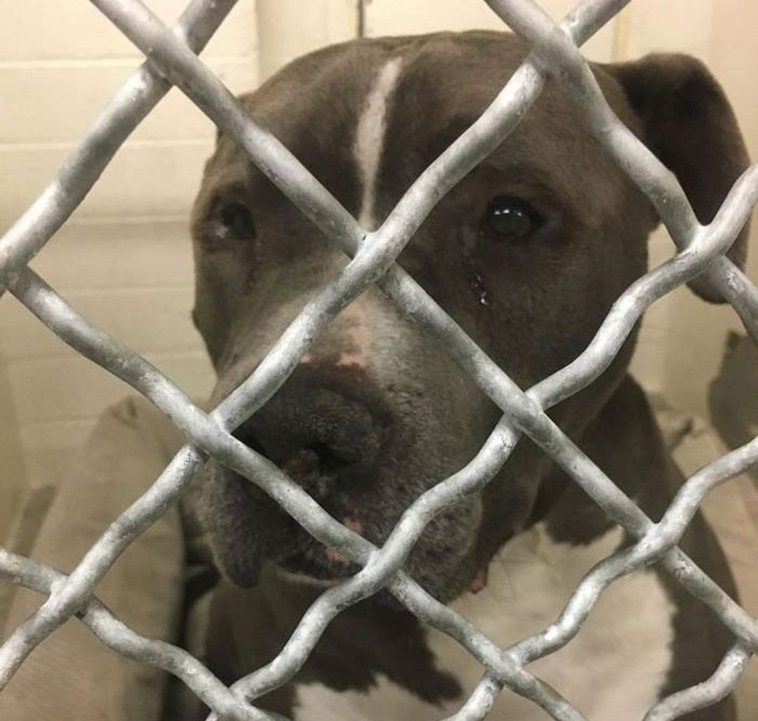 ADOPTED – moved to SAFE Album 02/10This is BLUE KING. He was surrendered today and when we walked up to him we woke him and he immediately let out this painful whimper once he realized this was really happening. He looks like he's been crying with tears :( The Video is not exciting, (and you might want to turn the sound down)but he is so hurt and sad and he just wants them to change their minds. This sweet, sensitive soul needs help fast. HE LOVES LITTLE KIDS< DOGS and even CATS! Anyone that will LOVE him.!! Please SHARE for his life, he needs a TEMPERAMENT TEST requested IN PERSON by an Interested Party before the Shelter will allow him to be saved. Without this Test being ordered he can be PTS at any time after his Available date. A FOSTER or Adopter would save him. Thanks!BLUE KING#A4492120 My name is BLUE KING and I'm an approximately 4 year old male Pit Bull. I am already neutered. I have been at the Carson Animal Care Center since 1/31. I will be available on 1/31. You can visit me at my temporary home at CRECEIVING.My former family who owned me for more than a year had to give me up because they were moving. But they said that I spend most of my time outdoors, but it's not ideal. I seem to be good with small children. I am housetrained. I am learning how to walk on a leash. I seem to get along well with dogs and cats. http://www.petharbor.com/pet.asp?uaid=LACO1.A4492120Carson Shelter, Gardena, California216 Victoria Street, Gardena, California310.523.9566, M-TH 12pm – 7pm, F-SU – 10am – 5pm?? INTERESTED IN FOSTERING? If you are in LA, OC, SB, or Riverside County and can foster this dog, please take a moment to email CarsonfosterS@gmail.com ASAP to request an application. It would save their life! ?PHOTO THREAD: https://www.facebook.com/savingcarsonshelterdogs/photos/a.172032662969376.1073741830.171850219654287/726105214228782/?type=3&theater

Tears were dripping from his eyes, and some speculate that it was due to allergies 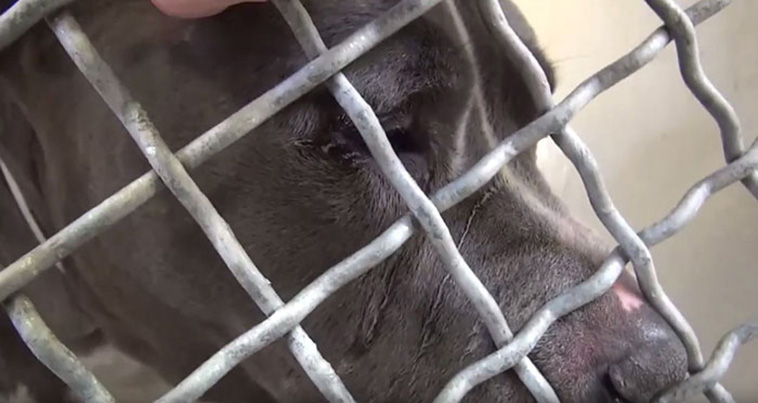 The pooch was abandoned by his family who decided to move to a new home. The dog was left in Carson Shelter in California which is a high kill facility. 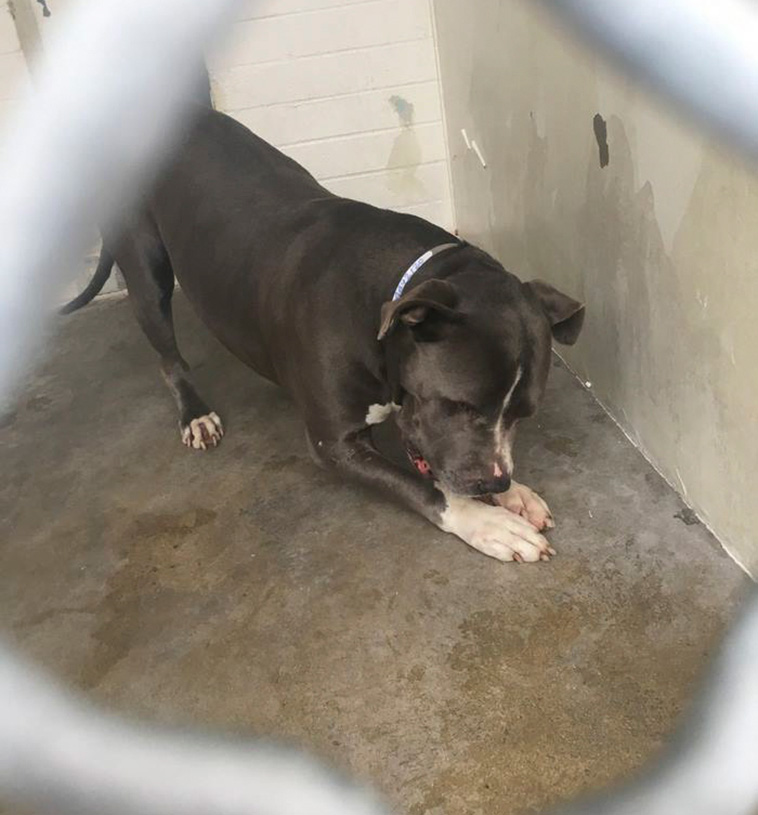 There is a high tendency of being killed if the pit bull stayed in the house for a long time. After some time, some people decided to help the pooch by recording and uploading his video to Facebook with the aim of getting an adopter.

Jennifer McKay showed up after some time and decided to meet Blue King. “At that point, the dog was very weak and sad,” She told the Dodo. 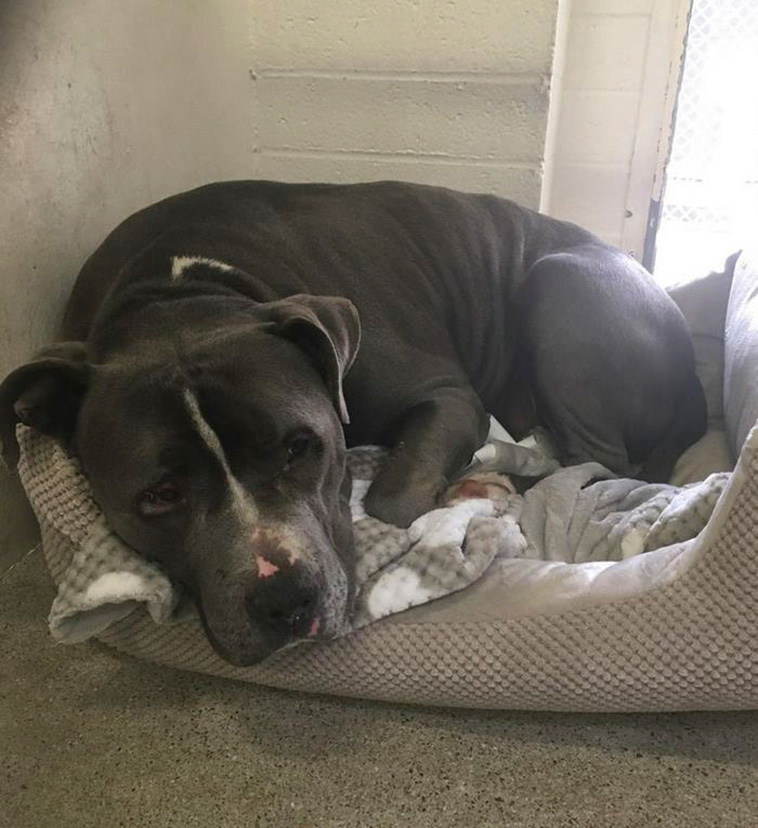 “Blue King didn’t even appreciate the moment like other dogs who will definitely make eye contact, wag their tails and occasionally stand up to see me.” 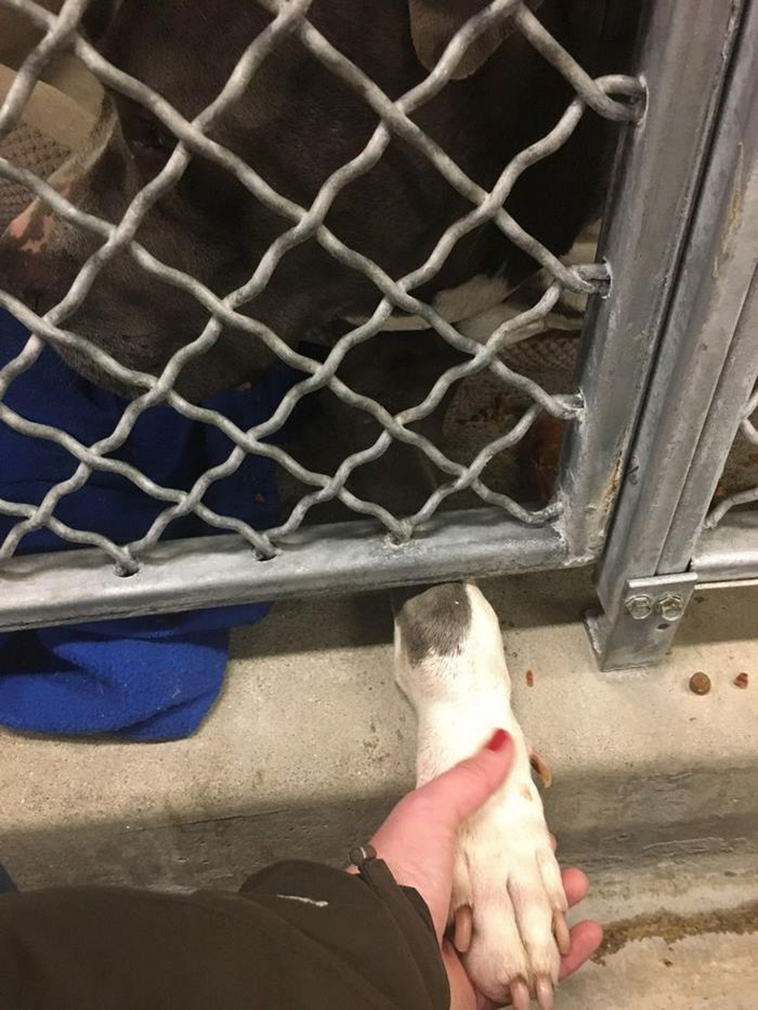 “With the way Blue reacted to the passerby, it is obvious that he was searching for his family,” She said, “He probably knew he was left there”. 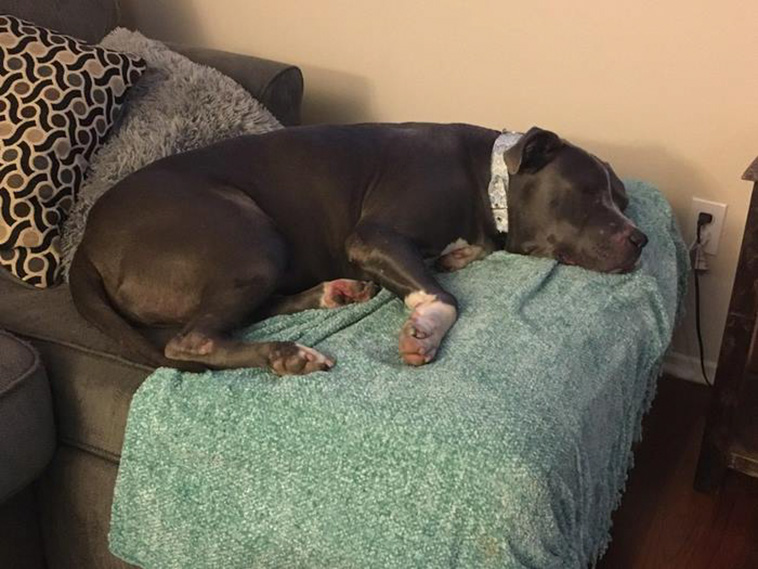 Mckay had finalized within herself to adopt the Blue King, she then took the dog home after passing the temperament test. Blue King changed totally after leaving the shelter. 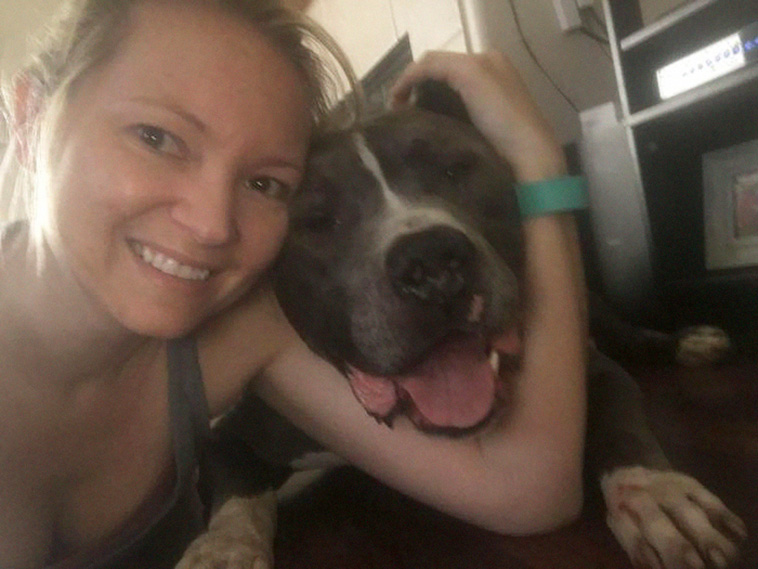 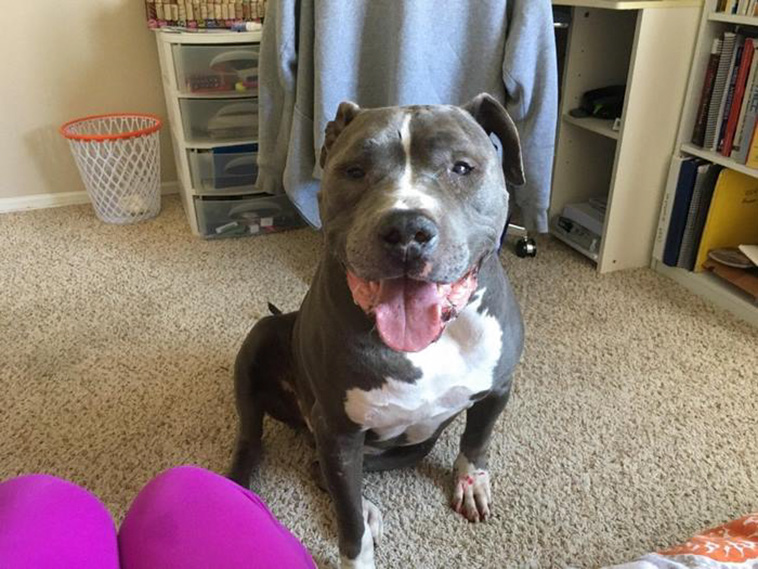 However, there are lots of things the Blue need to learn such as the basic commandments and walking on the leash but she added that the dog will soon be very fine. 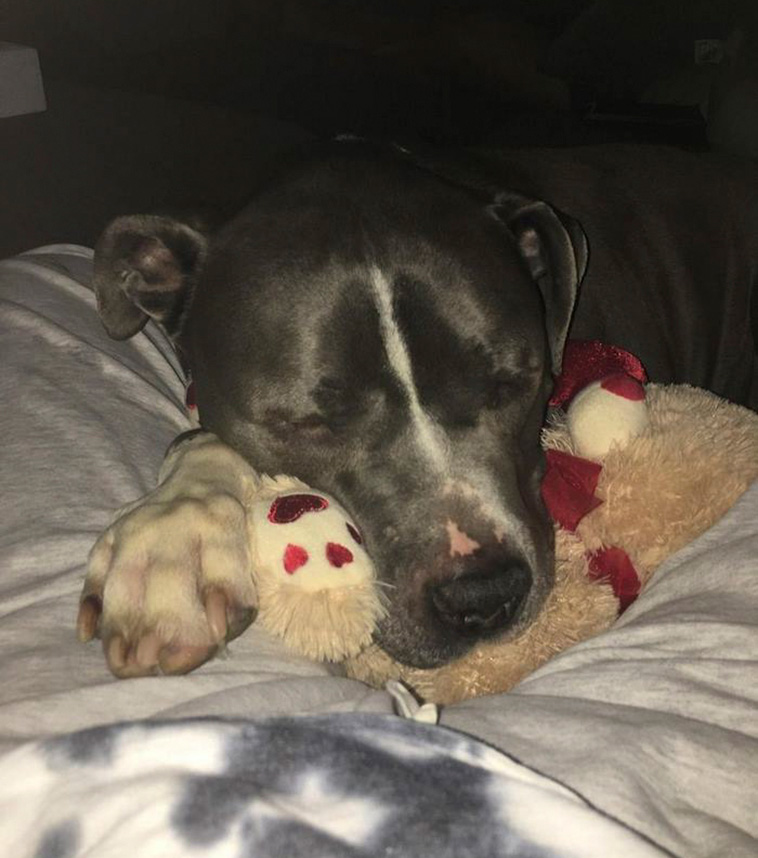