Evan Switzer, a photographer from Queensland, has clicked some wonderful photos of the grieving animals. It was a tragic moment for a young Kangaroo when it went to reach out to its mother as it realized that the mother is about to die. As per researchers, the Kangaroo might have died when it was trying to mate.

Once the mother kangaroo died, the male partner stayed close to its body and did not let any other kangaroos come close to it. Evan Switzer said that he had seen dead animals lying around before but had never seen such love and grief shared among animals. The male was so protective that it did not let any other kangaroos even come close to it.
However, the young one continued to remain confused and used to hop a little far, have grass and come back soon after. Also, there were no injuries found on the body of the dead kangaroo.

A dying female kangaroo is cradled by her mate in River Heads, Queensland. 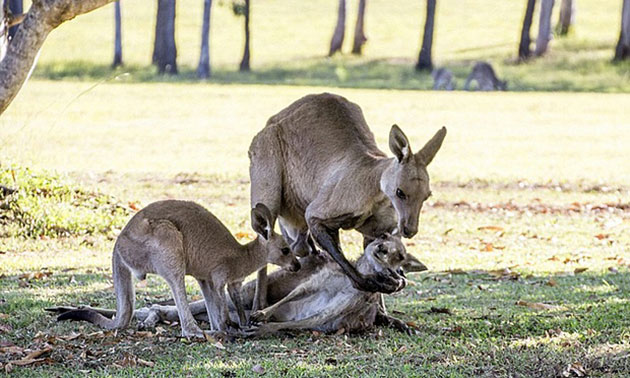