The instinct of motherhood is undoubtedly one of the strongest. This instinct teaches us how to raise the child, how to care for it, and how to teach it everything it knows. As humans, we are taught to protect our babies so that our bloodline can survive another generation and live to be healthy and happy, but the thing is that it is more than just plain biology. We care for our babies more than just trying to save our line, we care for them as people because they are our families. We want to keep them safe and help them through life so they have the best one they can. Mothers will do whatever it takes to provide for their young, and that kind of dedication is shown best by the story of the lioness who crept down a steep cliff to save her cub that had fallen down. 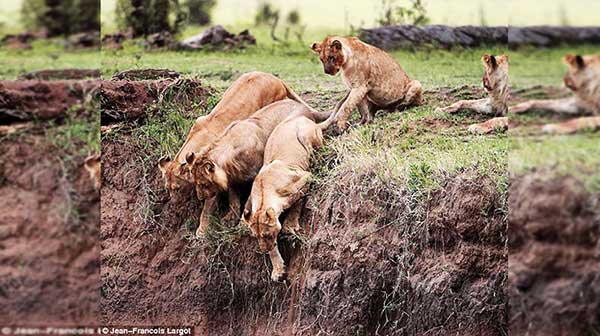 A joyful young cub makes the honest mistake of playing too close to the edge of the cliff and falls over the edge, tumbling down to a precarious stop where he is spread thin and can’t get up on his own. Hearing his cry for help, his mother rushes over and paces around the top of the cliff, distraught that her baby is stuck down there and she can’t get to him. She tries to make her way down the cliff herself a few times but doesn’t have enough knowledge to be able to get down to where her cub is still stranded. Knowing this, she runs to get the help of other lionesses, leading them to the cliffs edge, where they all try to get down the steep face, only to back off and start over, claws scrabbling, and tails flicking back and forth. At last, though, the lionesses go back to where they were stretching in the sun before, knowing that they are not going to be able to get down there without endangering their own lives. 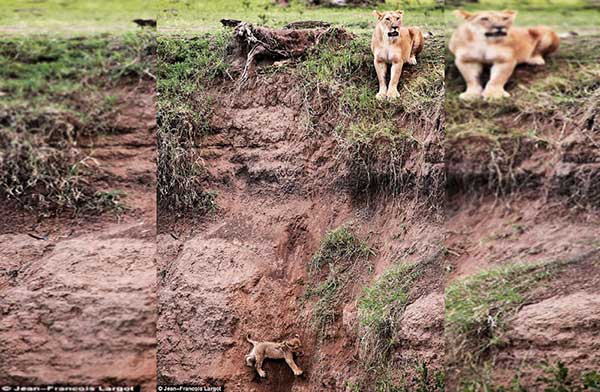 Mama lioness lies down on the embankment and thinks, as her baby cries out to her some more. She paces back and forth, finally creeping up to the edge and starts to head down the embankment. Her muscles are straining and it’s obvious from her pose that she’s terrified, but she keeps going anyway, knowing that her defenseless, tiring baby is counting on her to come down and save him. The creep down the mountain is dangerous and risky, but she makes her way down slowly with a determination that is heart-stopping and breathtaking all at once. She reaches her cub, and he gives his little legs a rest as she scoops him up and starts the slow climb back up to safety. The climb back up is just as precarious as the climb down, and this worried mom is careful to make sure she doesn’t slip up. After all, she’s got her baby in her grasp, so she can’t endanger his life as well as her own. 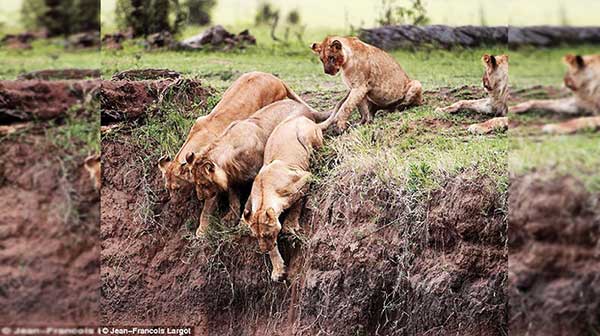 They get back up to safety and the other lionesses look on as she licks her baby over and comforts his mews.  It is definitely an incredible moment for the photographer to have caught on film, and seeing mother and son reunited must have been a life-changing experience, especially considering how she was the only one willing to risk her life to get to her son. This story shows us all a little more about human instinct, and the motherhood instinct as well. The instinct to salvation, to keep yourself alive and safe was demonstrated by the lionesses that wouldn’t go and help their friend that needed them. Understandably, they wouldn’t want to risk their lives, but they let their friend go down and do it on her own without even watching to make sure she is okay and able to get her baby up to safety. That is the instinct of self-preservation or selfishness. It’s natural, and it exists in other species other than human beings. 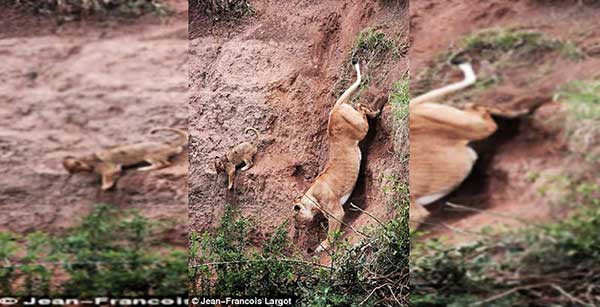 Next, was the instinct of survival, in which the baby represented. He clung to that mountainside for dear life and kept holding up and mewing to show his mom that he was okay, but that he still needed for her to come and get him. It’s inspirational and very brave for such a young cub. Lastly, the motherhood instinct is so very clear in this mother lioness, especially in the fact that she risked the climb down, up and then stopped to ensure that her cub was okay when they got back to safety. She cared for her baby with all her heart, so much so that she was willing to risk her own life to save this little one. That also demonstrates how deep love goes, sacrificing your life for someone else that has gotten you both into trouble. There would be no doubt that mama lioness would have given her little one a good scolding after that, but the important thing is that he and everyone involved were okay. 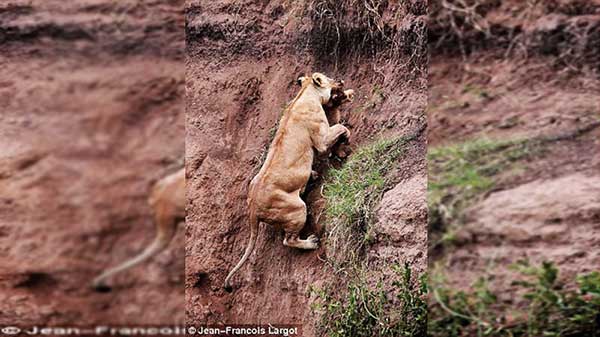 Human love and motherhood are intertwined amongst the species, be them furry or otherwise. The maternal instinct is so very strong in this photo diary that it is hard to see the hard predator side of this brave lioness as she climbs to rescue her little-trapped baby. Instead, we see a softened and distraught mother that was trying as hard as she could to stay brave for her little one and rescue him at the same time. There is much to be learned from the lion family, and this mother has much to teach mothers and lovers of all species. If you believe that you and your little one will be okay, and if you care enough to sacrifice your own safety and comfort, all will be fine. The fact that this was captured on film is remarkable and inspirational, two things that this bitter world needs more of. 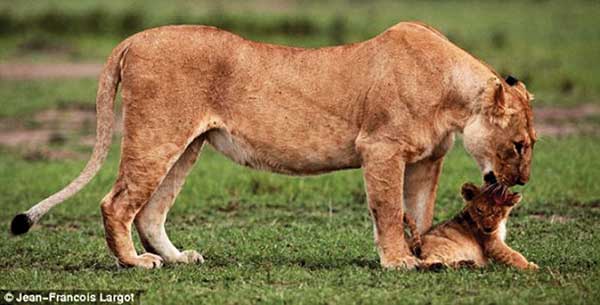