Quite often, in fact most often, it’s the unplanned events in life that are the best. No where is that more present then in this great impromptu street jam between a busker and a homeless man in a wheelchair.

Relating the story on his YouTube channel musician Jonny Walker, who was busking in the city of Leeds, UK, tells how he was out on New Year’s Eve playing some music to the people mingling around when a wheelchair-bound homeless man, Bernard Davey, approached.

He notes how he’d seen Davey about when he’d been busking over the years, and also notes how his health had deteriorated. Still, Davey asked Walker if he could sing with him, and Walker agreed. 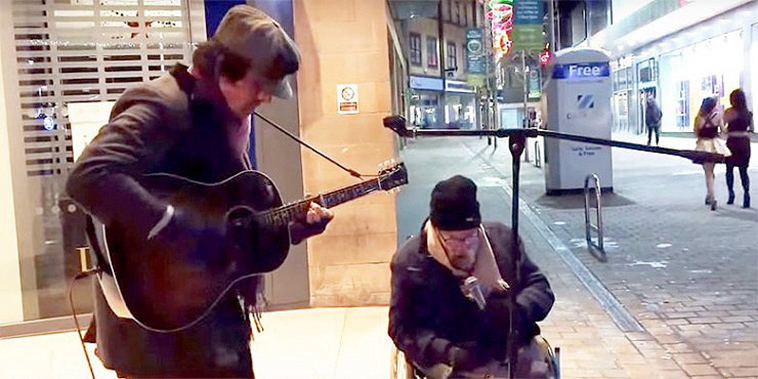 The result is a standout performance of “Summertime,” which is sung brilliantly by Davey. His voice is incredible. He could wipe the floor with any reality show contestant and it makes for a complete, but entirely wonderful, surprise.

Walker has already uploaded the footage to his Facebook page where it’s been viewed over 400,000 times.

“My spontaneous street jam with Bernard Davey was a soul-affirming, enriching experience which summed up everything I love about street culture.” Walker writes on YouTube. “The streets are full of wonderful surprises and stories. I hope Bernard’s amazing improvised version of ‘Summertime’ helps people to remember not to judge people they see on the streets according to their appearances, but to always look below the surface appearance and find the person underneath.”

Walker runs the Keep Streets Live! campaign, a non-profit that promotes street performances in public spaces and compassion for the homeless.