In Nantes city of France, people can see a huge serpent rising from the sea near the Loire estuary. Officially named as Serpent d’océan, this sculpture is a massive work with its 130-meter length. It was finished in 2012 by Chinese-born French artist Huang Yong Ping. The sculpture is now on display in the art gallery of Estuaire. Made of aluminum, this sculpture shows itself to the wanderers with the covering and uncovering of sea waves. Saint-Nazaire Bridge is closely located near the serpent and they both show characteristic similarities between the serpent’s spine and the shape of the bridge.

During the Chinese struggle for a new cultural identity in the 1980s, also known as Chinese Avant-Garde exhibition, Huang Yong Ping was among the important figures of that time. Many of his artistic works had been banned by Chinese officially before he finally made it to France. Since then, he has become a French citizen and he is reflecting on his art on his works in a contemporary way. He is also first to introduce Chinese mythology to Europe through his extraordinary perspective. 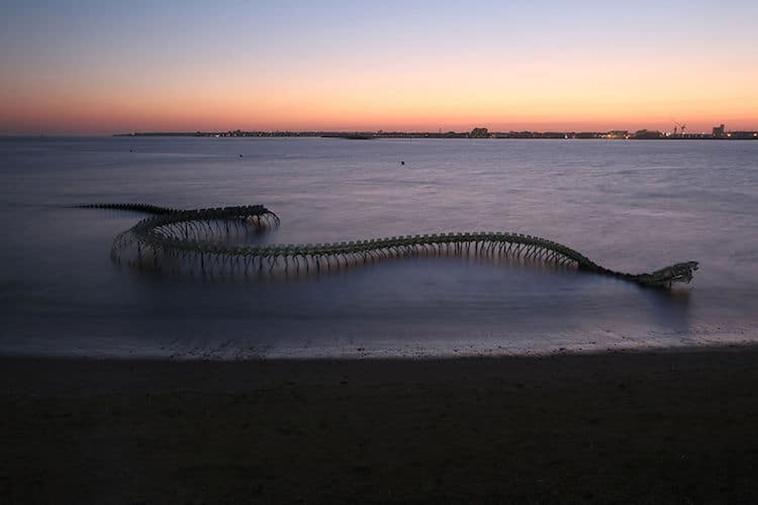 Serpent d’océan mirrors the cycle of nature and life in its skeleton changing its image throughout the year. When it is covered by algae, it almost reflects how human-beings age as the time passes by.

2 years ago, Yong Ping built more on his previous work and decided to come up with a larger sculpture of 240 meters to display on Empires in Paris. The work is now circled by around 305 shipping containers as a symbol of international trading.