It fit on one sheet of paper.

Going through old papers my dad gave me, I found his map of the internet as of May 1973.

Many people forget that the internet was invented in 1969. At this point, it was only used for military and government purposes only. Then in 1973, the internet expanded to other locations such as research universities and private companies. However, there were still so few internet users that a map of the entire internet network was sketched out on one piece of paper.

In the early 1970s, Paul Newbury had a job at Carnegie Mellon, which was a top computer science school in the United States at that time. The internet was basically still a secret project at this point and the public was not aware of it. Apparently, Paul Newbury was the one who designed the map of the internet as it was in 1973. His son, David Newbury, recently discovered the map after going through lots of old papers left to him by his father.

According to the paper, the original members of the internet included UCLA, UCSB, Utah, and Stanford. In 1973, the list expanded to Harvard, MIT, Case Western, and Carnegie Mellon. Others were small government labs such as the Army’s Aberdeen Ballistic Research Lab and the Lawrence Berkeley National Lab. Soon after, private research organizations such as Xerox and MITRE became members too.

The paper which contains the map was featured in a report from the NASA Ames Research Center. It maps out the network’s geographical spread quite clearly. 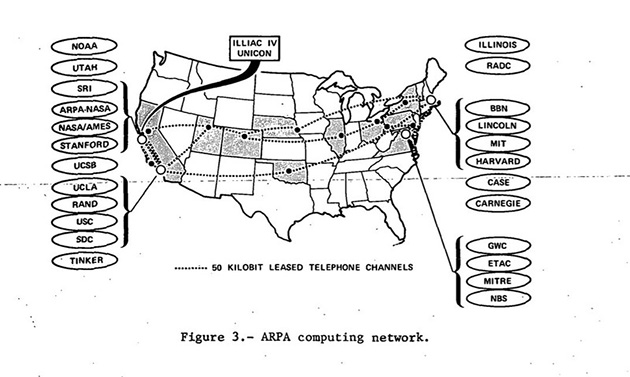 After Newbury posted his map, a couple of others showed up on the same thread. Here’s one of the original nodes:

@workergnome @Crell I have this too, which are the original nodes in December 1969, when it went live. pic.twitter.com/okVGnjYiGC

And another early one:

@workergnome @Crell I have this one, which might pre-date it. pic.twitter.com/2hZGwfgUYQ

ARPANET grew quickly, though. By 1977, here’s what the map looked like: 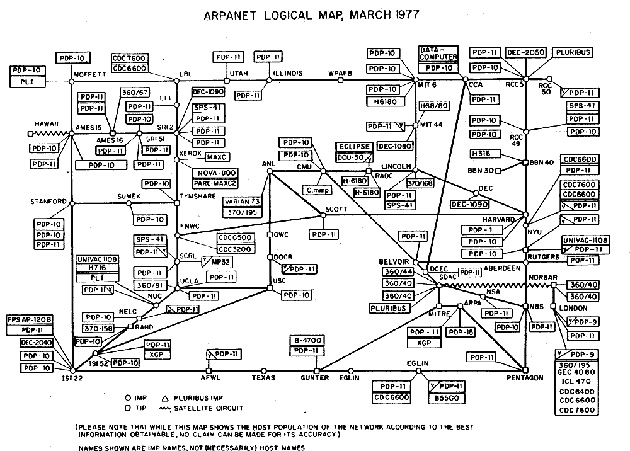 This map, though, came with a caveat. This was the “best information obtainable”—but perhaps not entirely accurate. Already the network was growing so wildly it was impossible to know exactly how far it stretched.