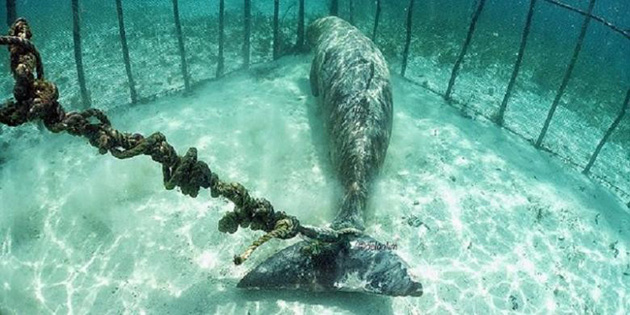 When a group of divers were diving in Kokoya, Indonesia, they found something shocking while they were exploring around. They saw that in the shallow ocean floor, animals were trapped: there were two dugongs, which are rare marine mammals that have a close relation with manatees.

Delom Lim, who was one of the divers, told that the animals were commonly known as sea cows and it was sad that the calf and the mother were placed in separate cages. Apparently, it was done by local fishermen so that they could profit from the tourism. They would charge tourists some money to click pictures with the sea cow; which is truly sad.

Although there is no clarity regarding the duration in captivity, it seemed that they were in there since weeks together and their tails also had deep scars. Finally, the divers tried to convince the captors to set the animals free as they were protected species. However, as their efforts were futile, the wildlife authorities went to the location and set the animals free! These animals are anyway threatened by human activities and further threatening them in captivity is highly disappointing.